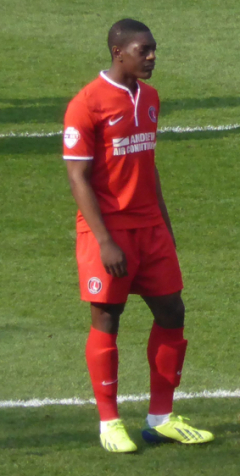 Charlton may have lost their latest FA Cup quarter-final at Bramall Lane in March, but generally South Yorkshire has been a rewarding place to watch the Addicks in recent years.

Victories at the two Sheffield clubs were a vital confidence-building element in the 2011/12 promotion campaign, while Charlton hit six for the first time in 37 years and recorded the club’s biggest-ever away win at nearby Barnsley’s Oakwell 12 months ago - 6-0 with an unprecedented six different scorers.

Now Marvin Sordell has staggered his critics by the Addicks’ first away hat-trick at the current level in 14 years by scoring three times in the crucial 3-2 win over Sheffield Wednesday at Hillsborough - doubling his Championship goal tally for the season at a stroke.

Indeed, it was only the third occasion that the entire team had managed three goals in a league match this season and the first away from The Valley.

It was the first second-tier Charlton hat-trick since Deon Burton’s treble in the final match of the 2008/09 season, a 4-2 win over Norwich City that ensured the Canaries dropped, with the Addicks, into League One.

Since then Bradley Wright-Phillips was credited with a League One treble at Chesterfield in February 2012, although one of the goals took such a significant deflection that it’s doubtful the Premier League’s Dubious Goals Panel would have accepted it.

Fortunately for Bradley there is no serious scrutiny of these matters in the third tier and it’s not for me to deny him the distinction, although I have to confess I completely overlooked it when writing about Sordell’s achievement in the latest VOTV.

And even though Chesterfield is in Derbyshire, it’s not that far from Sheffield or Barnsley!

Otherwise, you have to go back to Andy Hunt’s treble at Stockport County, in February 2000 (3-1), to find the previous one on foreign soil. That came just a fortnight after he’d performed the same feat against Norwich at Carrow Road (3-0).

And given that Clive Mendonca did the same thing to the Norfolk club on their home turf in just 21 minutes in September 1997 (4-0), Charlton fans might find an additional reason to welcome the potential return of the East Anglian club to their fixture list next season, apart from Delia’s pies.

That’s as long as we stay up, of course. And divisional status played a part in the lack of away hat-trick success since the turn of the century, because it was an unlikely prospect on many Premier League grounds.

It wasn’t unprecedented in the top flight historically, however.

Eddie Firmani hit a treble against Manchester City at Mane Road in November 1954 (5-1), and so did Stuart Leary at Bolton Wanderers’ Burnden Park in August 1955 (3-1).

But the first Charlton player to score three times in the Football League away from home, was Wilson Lennox, who remarkably got all five goals at Exeter City in the 1928/29 Third Division South promotion campaign (5-2).

That was in February - and just two months later Jack Horton almost matched him, scoring four at Fulham (5-2). This time Lennox just added the odd one.

Cyril Pearce was the first Addick to do it twice, in the space of 43 days at West Ham United (3-7) and Grimsby Town (5-5) in November 1932 and January 1933, without even tasting victory, while the Addicks were upwardly mobile again when Ralph Allen hit four at Gillingham (6-3) in December 1934.

There was a veritable goal-fest in the late 1950s and early 60s after the club lost its longstanding place among the elite, with Johnny Summers hitting three at Bristol City’s Ashton Gate in October 1958 (4-2), and Billy Kiernan doing the same at Grimsby in April 1959 (5-1).

Summers and Firmani both hit eight hat-tricks for the club overall. Dennis Edwards “only” managed three, but his treble at Luton Town’s Kenilworth Road in 1961/62 helped the team to a 6-1 Second Division win, which remained the club’s record away victory for 51 years.

Young Keith Peacock then got in on the act with three goals at Plymouth in April 1965 (5-1). He never got another senior treble, home or away, but this is largely explained by the fact that he moved to the wing quite early in his career.

There was then a surprisingly long interval before Derek Hales scored the fifth treble of his career and only one of his second spell at the club, at Cardiff City in August 1984 (3-0).

A decade later, Carl Leaburn caused nearly as much astonishment as Sordell by netting three times at Ipswich Town in September 1995 (5-1), the last - like one of Hales’ - from the penalty spot.

It was even more remarkable since just four days earlier Lee Bowyer had scored three in an away League Cup tie against Wimbledon at Selhurst Park (5-4). It was only the second away trick in 30 years, but Charlton did it again the very next weekend.

The elephant in the room, perhaps, is Mendonca’s treble in the 1998 play-off final against Sunderland (4-4 aet, 7-6 on pens), which strictly speaking wasn’t an away game or a regular season fixture.

But it was at Wembley, it helped us win the promotion decider and it was by universal consent technically brilliant.

Sordell’s won’t quickly be forgotten, but I am not sure how anyone is ever going to top that.