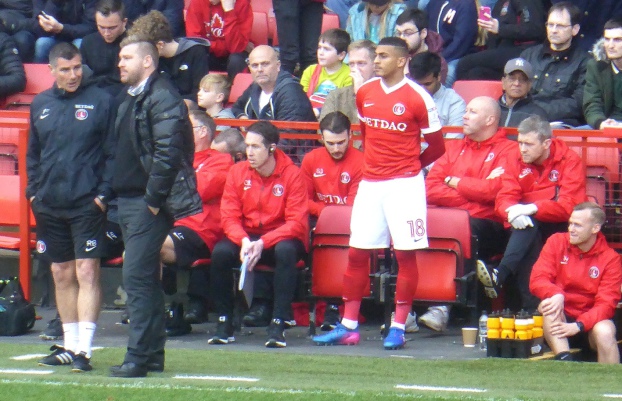 What's next? Boss Karl Robinson (second left) says he has been told the club is not for sale, but many believe it will change hands in the near future regardless

This is how it ends.

There will be no fanfare or sudden, shock announcement. Instead, there is the slow, accidental seepage into the public domain of the certainty that Roland Duchâtelet is engaged in selling Charlton Athletic.

Part of the reason for that will be commercial confidentiality, with the likelihood of non-disclosure agreements protecting bidders until the deal is done. Another will be the Belgian’s desire to avoid being seen to back down in the face of protests.

Yet a sale does not submit itself easily to privacy. There are things that must happen, which are difficult to hide from public view even when they take place inside the club, such as the assembly of a due diligence process.

There are professionals who must be called in. They may be discreet themselves, but there are always friends of friends who learn what they are doing.

Then there are agents who appear at the ground to be shown around and new faces in the directors’ box. Suddenly the club’s PR firm loses its appetite to engage with the media.

You can align it, if you choose, with a new recklessness in the day-to-day conduct of executives who know the clock is ticking down on them, and the shifting position of others who have found it convenient to act as apologists for the ancien regime, but now discover they had reservations all along.

Still others find themselves carelessly exposed as inadvertent spokespeople for official denials, which are taken at face value only by the gullible and reported in the media more for balance than because they are believed.

The loan conditions of six former directors, as well as current one Richard Murray, must be satisfied before any sale can be concluded. That is a potential £7m drag on the value of a deal. It must necessarily also widen the circle of knowledge.

Meanwhile, the business of running the club appears to have been allowed to drift, with no announcement of season-ticket plans well into the second half of March, the latest for many years, and schemes like a proposed supporters’ council strangely forgotten.

Indeed, has the work on the second stage of the training ground redevelopment, commencement of which was announced for a second time in six months at the end of February, yet begun?

If all that looks like a raft of circumstantial evidence, with no definite proof, then so be it. Caution is understandable where Charlton is concerned these days and names cannot be named, which makes the public case look weaker. But it does not hinge on a single matter and withdrawing any element of it will not cause it to collapse. Indeed, it is underpinned by significant noises off that are more difficult to reference.

Barring some last-minute reversal though, this is the end of days for the Duchâtelet regime at The Valley. They are ending not just because the regime is opposed by most fans, but because of its unremitting failure to achieve any business objective the owner may ever have had.

A sale is the only sensible option left on the table for a man who has never demonstrated an ounce of sentiment for the club as a sporting enterprise, having failed even to attend a game in England in two and a half years. It does not demean him to take it.

The question now is not whether the club is in the process of being sold, but to whom and what that means for the future - of individual players, of Karl Robinson and of The Valley itself. The answer to that remains frustratingly obscure for now. The future is an undiscovered country, quite literally. But this nightmare is surely ending, because it must and because the accumulating evidence says it is.

Can what comes next really be any worse?