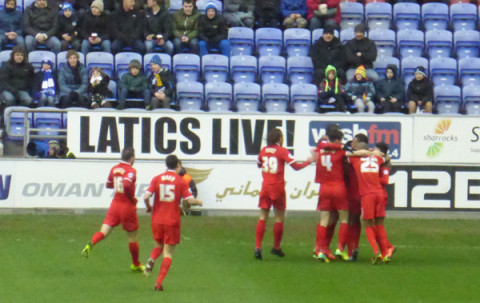 Rare sight: Charlton celebrate the goal at Wigan - their 23rd in the league this season

What came up must not go down

It was about halfway through the recent away game at Doncaster Rovers that I came to the conclusion we were going down, writes Rick Everitt.

Rovers had a one-point advantage over Charlton at the start of the match, but had played two more games. The 3-0 defeat put us in the bottom three for the first time this season.

But it wasn’t so much the statistics as the demeanour of the players, and their lack of any kind of spirited resistance to an outcome that probably became inevitable when Lawrie Wilson was sent off for conceding the penalty that led to the second goal.

Unusually for a Chris Powell team, they looked as if they were going through the motions.

Up until that miserable evening in South Yorkshire, I’d assumed that the arrival of reinforcements in the January transfer window would rescue the season. For who would buy the club and let it go down?

The previous regime had little choice but to sell or they would lose most - probably all - of the loans they had had to put in to keep the business afloat. That was the consequence of the inter-creditor agreement they’d accepted when taking over the club in 2010.

And as the previous season’s ninth placed finish had suggested, there was enough quality within the existing squad to keep the team in the division - save for a critical weakness up front.

In fact, it you look at the club’s history, scoring at a rate of less than one goal a match has usually had a predictable outcome.

Up until the Doncaster game, his options this term had been Kermorgant, Simon Church, Marvin Sordell and Joe Pigott. This obviously had to be addressed.

Yet here we were three days from the end of the transfer window, nearly four weeks after the club had been taken over, losing a crucial match to Doncaster.

And the single most important event in the days that followed would be the sale of Yann Kermorgant, the team’s leading scorer in both seasons*. I’ve listened to all the arguments, claims and counter-claims, but try as I might I can’t see the football sense of that.

I am not keen to condemn Roland Duchatelet. I’m sure he wants the best for the club and for now he should get the benefit of any doubt that’s going.

He’s brought in Iranian striker Reza Ghoochannejhad and a highly rated young Pole, Piotr Parzysek, the second of whom we’ve barely seen so far. Reza looks a useful player, if perhaps ill-suited to the rough and tumble of the Championship. Or perhaps just the rough, as he seems to know about the tumble.

In midfield, where we’ve also lost Dale Stephens, Astrit Ajadarevic has impressed and Diego Poyet has looked older than his years, but the team is obviously unbalanced and perhaps too dependent on youth to see out the campaign. The shortage of goals in the side is surely a factor in Johnnie Jackson retaining his place.

But we are still losing games and the clock is running down. The next Championship match is a difficult one against promotion-chasing QPR, a team we struggled to compete with at Loftus Road in November.

Then we face Barnsley in midweek before going to runaway leaders Leicester City on March 1st. Even supposing we beat the Tykes, who are in similarly desperate straits, and lose the other two, that would give us 27 points from 31 games - leaving us needing between 21 and 25 from the last 15 matches to have any chance of survival.

It can be done. We took 25 from the last 15 games last season. But it would need a transformation that in my view isn’t going to happen without significant loan reinforcements  - and there is no margin of error for more players to settle in from abroad.

The fact that there has been no news on Powell's own expiring contract is an ominous sign.

Voice of The Valley has already reported that Duchatelet has a £4m insurance policy against relegation factored into the purchase price of the club.

To put that into context, however, relegation would cost the club £3m immediately in combined television and Premier League solidarity payments - the difference between £4m in the Championship and £1m in League One.

As a Championship club Charlton currently get £2.2m in solidarity payments paid in two instalments in August and January, plus £1.8m in TV fees paid at £150k a month, and a bonus of £80k if a home match is televised live.

Down in League One the solidarity payment is £360,000 and the TV fee in the order of £750k, with reduced likelihood of a visit from Sky, albeit they have shown limited interest in covering us at our current level. After the Millwall game, who could blame them?

Player costs would likely be lower, especially as so many of the current squad will leave at the end of their current deals, but so too will commercial revenues, including shirt sponsorship. The club already accepted a reduction last summer to retain Andrews.

But the less predictable hit, short and medium term, would be in ticket revenue and associated matchday income. And here I would offer a serious word of caution to the new regime: do not expect 2009-2012 to be an accurate guide.

When we went down in 2009 after two Championship seasons we had been very successful at holding on to a significant cohort of season-ticket holders who had started coming in the Premier League years.

Indeed, immediately following relegation in 2007 we lost less than one per cent net of the people who had purchased in the last top-flight campaign, and we still had 13,250 - excluding hospitality, disabled fans and their helpers - when we went down again.

Despite cutting prices significantly for 2009/10 and a very focused marketing campaign that showed how the club had recovered from another very low ebb 25 years earlier, we lost a quarter of them. By 2010/11, we were down to 8,750.

It was only through a further major price cut in 2011 and the evidence of significant investment in the squad that were reversed the decline and then climbed back above 11,000 in 2012/13 following promotion.

The price increases last summer - which in my view were necessary and generally sensible - trimmed sales back towards 10,000 but will have achieved a modest increase in revenue.

However, the fact remains that our average attendance after 12 home games in the Championship was 10 per  cent down compared to last season and the home support within that was down 13 per cent - and that will include up to 20,000 giveaways included in season-ticket booklets for the first time.

Indeed our gates are now lower in the Championship than they were in League One in 2009/10 and 2011/12, which is frightening, not least because we are guaranteed substantially higher visiting support in the second tier, typically 1,500 against 600.

Overall, it’s quite possible that reduced home matchday ticket sales this season will wipe out the gain in season-ticket revenue.

And disregarding the impact of cup competitions, the club could quite possibly lose another £1m in ticket sales if the team is relegated.

A third of that is from away supporters, but the rest is likely because our fans have already had a long, lingering look at the quality of football in League One and there is no appetite for more of it.

Further, if relegation is seen to have been avoidable, a manager who is hugely well liked is seen to have been a victim, and the club reinforces doubts about its non-football management by seeking to impose price increases, it’s probable more than a few will decide that this time they have had enough.

They’ll also know that imagining relegation is just for one season is a dangerous assumption, as many substantial clubs have found in the past.

I don’t believe that the above scenario is the intention of anyone at Charlton and it’s a fate that can still be avoided, but there must now be a significant risk that this is how things will play out. And I fear that this time the damage will be much worse than many believe.

It's not just the one-off £4m, if that is the bottom line, it's perhaps the final erasure of two decades' work by many committed people inside and outside the club in building up Charlton's support, reputation and credibility. And it's all so very unnecessary.

In a month’s time it may be too late.

*Kermorgant and Jackson finished joint top scorers in 2012/13 with 12 goals, although one of Kermorgant's goals at Watford was arguably an own goal.

For an indication of Charlton's 2014/15 season ticket plans and proposed changes to the family stand, which would require some existing season-ticket holders in the east stand to move from their current seats, see VOTV110.