Big Bob gets the boot. So now what? 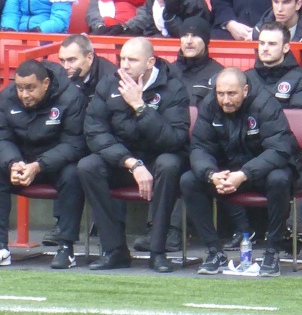 Gone: Peeters has left the building

11/1/15: So farewell then, Bob Peeters, as Roland Duchâtelet brings down his well-oiled axe on the neck of a third manager (head coach) in the space of ten months.

Just 24 hours earlier she had told fans in the Valley Review that the Duchâtelet project at Charlton is “one we feel has started well” and that “there are many positives to take from the first six months of the 2014/15 campaign”, blaming injuries and bad luck for recent poor results.

Surely she didn't think readers would evaluate the club's progress solely in terms of the new pitch and replacement seats?

Ninety minutes of football later - and after a match between two poor teams that Charlton could just as easily have won as lost - the head coach is such a big negative that he has to be dismissed.

That way madness lies, as Charlton previously demonstrated during the unhappy 2006/07 season, when Alan Curbishley had just given way to Iain Dowie, who was succeeded by Les Reed, and very soon afterwards by Alan Pardew.

The Addicks went down, albeit with a fight, and Pardew was to prove the biggest liability of all, contributing massively to the mess from which the club has yet to fully recover.

Risibly, Peeters himself commented in the Valley Review yesterday: “I think we can now all see the light at the end of the tunnel.”

Unfortunately for him, it turned out to be a train and Duchâtelet was in the cab.

Voice of The Valley, published before what proved to be Peeters’ final game in charge, did not endorse the prospect of the Belgian’s dismissal, because it seemed to us that the problems lie as much with the owner and an unbalanced squad as at the training ground.

We hadn’t particularly warmed to Peeters, with his strangely helpless post-match pronouncements and clumsy treatment of some of the younger players, part of which we were inclined to attribute to the fact that English is not his first language.

But it was obvious, even surely to Duchâtelet’s biggest supporters, that a Yann Kermorgant sized hole has plagued the Addicks since the end of the January transfer window last year.

George Tucudean was never remotely going to fill that void, even though he ticked all the right boxes for Roland. Peeters showed he shared that view when he preferred the inexperienced Joe Pigott to come on as a second-half substitute at Blackburn Rovers before Christmas.

Neither, perhaps, is the latest Standard Liège reject Tony Watt the solution to that particular problem, although in a brief appearance yesterday he looked a much more likely contributor to the cause.

What was notable, however, was that Peeters used Watt alongside Simon Church, moving Igor Vetokele wide. There was nothing in Meire’s programme notes that encouraged the belief the board would act to resolve the main issue even now.

With so few goals being scored, Vetokele clearly out of sorts and not fully fit, the lack of anyone to hold the ball up and a major crisis of confidence in the available goalkeepers, so much pressure was put on the rest of the team that even the previously sound defence has fractured.

Multiple changes to the team and players appearing out of position to fill in for absentees or vacant roles in the squad all added to the confusion, and the resemblance to some of the problems faced by Chris Powell was all too obvious. That is unsurprising, because they have a similar cause.

The difference this time is that Peeters was Duchâtelet’s chosen man, gratuitously installed to replace José Riga in the summer. If Bob is at fault then Roland is responsible, because he was determined to have him take over. He can’t pass the blame for that to anyone else.

Huge questions now hang over the judgement of the club’s Belgian owner, which in truth never went away after Powell, his assistant Alex Dyer and various players confirmed his interference in team selection last spring, demanding that inadequate players be selected.

What we can’t know for sure is the extent to which Peeters’s relationship with his players had broken down and that may be a key consideration in his dismissal.

We know the squad can do better, because it already has. But it was foolish ever to imagine that the club could get through the season without sufficient cover in key positions and by pressing 17-year-olds into service.

It’s a fair bet that Riga’s former assistant Karel Fraeye or the ex-Standard Liège coach Guy Luzon will now show up to take the reins at The Valley, although I’d welcome Riga back if he’d come.

Whoever gets the job, they are unlikely to be British or have much experience of the Championship. Optimists now have to put their faith in Duchâtelet’s decisions on football matters if the club is to prosper in the short term. That looks a very tall order tonight.