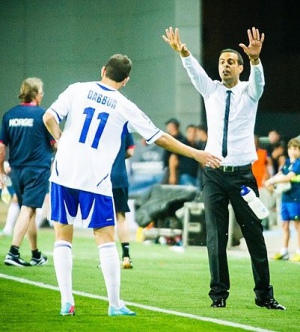 13/1/15: On Monday afternoon Charlton announced that the club had just begun “the process of searching for [Bob Peeters’] replacement”.

Chief executive Katrien Meire claimed of the sacking of Peeters: “Despite recent rumours in the media we had not considered this option until after Saturday’s game.”

Less than 24 hours later, owner Roland Duchâtelet had evidently mastered the contact list on his mobile phone and former Standard Liège head coach Guy Luzon was at The Valley meeting Meire and the remaining football management.

That’s the same Guy Luzon who was rumoured to be replacing Peeters’ last week, but apparently it’s all an astonishing coincidence.

Actually, anyone who thinks the job wasn't already his before that meeting probably also believes in . . . well, Alan Pardew.

In fairness to Meire, it’s clear she hadn’t a clue what was going to happen. Either that or she is extraordinarily naive.

After all, she had told fans: “It is important to stay calm and not get carried away by one rocky patch” and that Duchâtelet’s project had “started well”, just 24 hours before Peeters was dismissed.

Nevertheless her inept public statements over recent days are fully in line with a wider approach to communicating and engaging with supporters that has often appeared to be targeted at under 12s. No wonder her main initiative as chief executive has been the establishment of a junior council.

Charlton fans are used to better than this, having established their own credibility in the battles to recover The Valley in the late 1980s and early 1990s. Successive regimes recognised this and utilised the experience provided and positive energy generated by dozens of people.

The Belgians also talk about wanting to improve the relationship with supporters. But the rhetoric isn’t matched by what they do.

The 1,000 member Charlton Athletic Supporters’ Trust has been kept at arm’s length, as is virtually anyone with experience of running the club in the past, on the evident assumption that Roland always knows better.

Moreover, improved relations aren’t going to happen anyway as long as the club treats the fans as a whole like gullible children, even if the chief executive is content to be humiliated by her patron.

Israeli Luzon - who resigned at Standard Liège in October after a poor start to the current season, but it seems was then retained on the payroll at fellow network club Újpest - has considerable managerial experience in his home country, including three years as national U21 boss.

He steered Liège to second place in the Belgian Jupiler League last season, although his impressive win record at the club has to be seen in the context of the nature of the competition.

In reality, there is probably little question that he is the right man for the job, because the job as defined by Duchâtelet is not one that a majority of managers with Championship experience - or even without Duchâtelet experience - would be likely to accept.

Luzon may be able to get better results out of the current squad than Peeters, who after a promising start had been unable to mix and match the players provided to achieve any further success.

Rumours of rows in the camp and delegations to the board suggest a training ground in disarray, and if Peeters was the major part of that problem then removing him should help.

Yet the fundamental issue will remain that the squad is not good enough in key areas. It is simplistic to say that Peeters failed because he did not have a second striker to partner Igor Vetokele, but there is a strong core of truth to the claim.

Much else flowed from that, as well as the lack of strength in depth, including at goalkeeper. Incredibly the club now has six keepers, but only one with established English League credentials. And he is injured.

It follows that replacing Peeters with Luzon - or anyone else - is unlikely to solve the difficulties of itself. That requires Duchâtelet to bring in more players whose registration he and his immediate family do not already control and because they are ready to play now, not just as investments.

There will need to be more than pennies for this Guy.

The 31 points banked by Peeters give the team a cushion from another relegation fight, but not yet security. The first win under the new management will be keenly awaited, especially if it does not come before struggling Rotherham United arrive at The Valley on January 31st.

In appointing Luzon, Duchâtelet has shown that he is determined to continue with the deaf and dumb approach that saw the popular Yann Kermorgant and Chris Powell depart, Jose Riga arrive and keep the team up, and then the hopes for Peeters fall with the autumn leaves.

He has also, it seems, taken advantage of an existing contract, much as he has done with network signings like George Tucudean and Tony Watt, which will keep his costs down. But there is a world of difference between recruiting individual players on that basis and doing the same when selecting the man in charge of the team.

Charlton fans will travel to Watford on Saturday anxious for evidence that the latest change is one of the Belgian’s better decisions.

No doubt some will embrace Luzon as easily as they did Peeters and Riga before him, and would probably cheer the David Suchet characterisation of Hercule Poirot if he appeared on the bench just as readily.

Perhaps that’s not so unreasonable. It’s not Luzon’s fault, any more than it was Peeters’, Riga’s or Powell’s, that the latest owner is an autocrat with no understanding or respect for the club’s culture.

But many are struggling to recognise the Charlton they love and are now deeply sceptical about where it is heading under Duchâtelet's ownership. They will not be won over as easily. And if things do continue to go awry, then even the traditional passivity of Addicks fans may reach its limit.

As for Meire, her credibility is surely shot already.