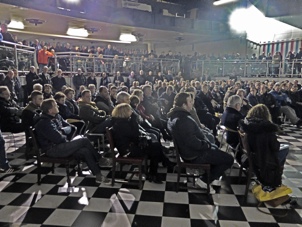 Fans at the public meeting in Woolwich

Another eventful week in the turbulent recent history of Charlton ended on a buoyant note with a second consecutive 3-0 victory, this time at relegation-threatened Wigan Athletic. It wasn’t a scenario that had looked very likely seven days earlier, so credit and plaudits need to be handed round. If it’s not entirely possible to say where they are deserved and in what proportion, that is no reason to be churlish.

One thing nearly all Charlton supporters would have agreed on at the beginning of the week was the importance of staying up. Six additional points from two games - after a sequence of 14 league and cup matches without a single victory - have made that a much more likely prospect. In the short term, that matters more than anything else.

A glance at the line-up gives part of the explanation. Before last weekend’s 3-0 home win over Brentford, goalkeeper Stephen Henderson had not featured in the first team since the previous victory, at Reading on November 8th, due to injury. If that was simply bad luck, the fact that three different men had deputised for him in the intervening period without further inadvertent interruption points to a lack of judgement among those supervising the squad.

By no great coincidence, meanwhile, Igor Vetokele returned to the scoresheet on almost the same timeframe, netting at Wigan in a third consecutive match after having failed to add to his autumn tally of eight since that win at Reading. A team that had scored six times in 12 Championship games had suddenly scored eight goals in three matches.

Vetokele’s previous stuttering efforts, although hampered by injury, can be blamed on the lack of a suitable strike partner, again the consequence of a squad apparently put together without a proper understanding of the demands of the English Championship season.

Ironically, for those sceptical about owner Roland Duchâtelet, it has to be acknowledged that it is a signing from within his network of clubs, Tony Watt, who appears to have helped trigger Vetokele’s rejuvenation. Equally the contribution of Frédéric Bulot, on loan from the same Standard Liège, has improved markedly in the last two matches under the stewardship of ex-Liège boss Guy Luzon. Bulot, too, has scored in consecutive games.

The signing of defender Roger Johnson as a free agent after being released by Wolverhampton Wanderers and the arrival of another short-term recruit in the former Burnley winger or attacking midfielder Chris Eagles look like sensible decisions, although they also serve to underline a point long made by Duchâtelet’s critics about relevant experience.

It might be pointed out that Charlton have been lucky in their “enemies” over these two games, facing a Brentford side that appeared to have been destabilised by the club’s owner and a Wigan team that hadn’t won at home since August. But by the same token, Luzon and chief executive Katrien Meire, who has taken the brunt of much criticism, were unfortunate that the first match after the clumsily handled replacement of head coach Bob Peeters was at free-scoring Watford.

The Belgians would be unwise, however, to assume that the return of six vital points in a week will change the developing narrative around in the club. Indeed, the 400 supporters who rallied at Woolwich on Wednesday to explore their anxiety about its future explicitly demonstrated by an overwhelming show of hands that their anxiety would not be assuaged by a run of better results. The mood of the meeting was to seek constructive engagement rather than confrontation, but it was quite clear that Meire’s take-it-or-leave-it approach to a proper dialogue with supporters has not been - and will not be - accepted.

The publication on Friday of the club’s annual accounts underlined that the size of its debts continues to grow apace and the extreme unlikelihood that this can be addressed by anything other than an eventual return to the Premier League. Some £28m was owed to Duchâtelet’s Staprix by June 2014, against £15m to the former owners’ British Virgin Island company a year earlier.  This financial hole is going to get deeper and deeper, especially if the additional revenue paid to all Championship clubs as a result of the new Premier League TV deal and amended Financial Fair Play rules simply inflates player wages.

Moreover, it was confirmed that around £2m had been spent in the year acquiring three players on long-term contracts, two of whom played in one game each before departing, while the third was relocated elsewhere after little more than three months in a red shirt. What’s more this hapless approach to recruitment continued into the current season with the arrival of Liège failure George Țucudean and his subsequent departure in the January transfer window to Steau Bucharest.

Having started promisingly despite this, Charlton’s 2014/15 season fell apart soon after the clocks went back, with the owner eventually scrambling to patch up the damage that had been largely of his own making with a new set of short-term solutions. Consequently, the club will reach the summer having progressed relatively little in the 18 months of Duchâtelet’s ownership, quite probably with fewer points than manager Chris Powell accumulated in difficult circumstances two years ago, and with significantly more debt attached to it.

There is, of course, the promise from Tuesday’s VIP season-ticket holder meeting of jam tomorrow, in the form of further investment in The Valley and the training ground, which is worthy stuff.  Nevertheless, the feeling persists that the ownership has some odd priorities for investment, misunderstands what supporters want, and that the saga of the training ground works - now costed at more than £10m - will not proceed in a straightforward way.

In the meantime, Luzon’s two wins are unlikely to protect him from being upstaged by his predecessor when Powell returns with his current club Huddersfield Town next weekend. His only hope of answering that is on the pitch, notwithstanding what happens to the Addicks at promotion-chasing Derby County on Tuesday night.

Still, all Charlton supporters can now approach next weekend with lighter hearts, which is a profound relief after the trauma of the winter months, even if the team’s status is not quite secure yet. Whether the club will be back in the same position in 12 months’ time is likely to depend on how willing the owner is to open his mind, never mind his wallet.