The presence on Sunday in the Portsmouth directors' box of former Oxford United director Simon Lenagan, alongside ex-Sunderland executive Charlie Methven, offered more evidence of the latest takeover under way at Charlton, reports RICK EVERITT. Remarkably, it was the Addicks' tenth win in 11 visits to Fratton Park, too. Read the full story here.

Pompey joy: the Charlton players find yet more reason to rejoice at Fratton Park after their tenth win in 11 visits

Hasty exit for Sandgaard as new faces move in

Now you see him: Thomas Sandgaard at The Valley in August

Thomas Sandgaard was a notable absentee from The Valley for Wednesday night's memorable penalty shootout win over Premier League Brighton & Hove Albion, despite only flying into London on Monday.

RICK EVERITT looks at the compelling evidence that the Charlton owner is preparing to hand over the reins after just 27 months in charge - and the likelihood that those who would take them up are going to be able to do so. Read it here. 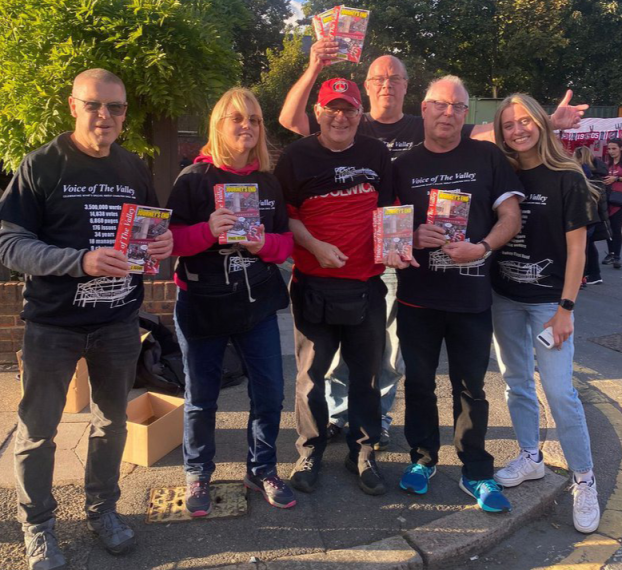 The last copy of VOTV to be sold at The Valley was handed over at 7.20pm on Tuesday, October 25th, ahead of Charlton's home defeat by MK Dons. It marked the end of a ritual that has been part of the Addicks' matchday scene, on and off, since January 1988.

The 84-page double issue included contributions from many of the names who have filled its pages over the last decade, if not earlier, including Steve Dixon, John Ingram, Kevin Nolan and Matt Wright.

This special edition reflects on the fanzine's history but also covers all the latest news, as you'd expect, with a detailed look at the playing squad and behind the scenes at the club as the new season continues.

Despite this being the largest-ever issue, we still couldn't fit everything in, so we've posted a bonus feature by "Lewis Coaches" on former Charlton historian Colin Cameron here. 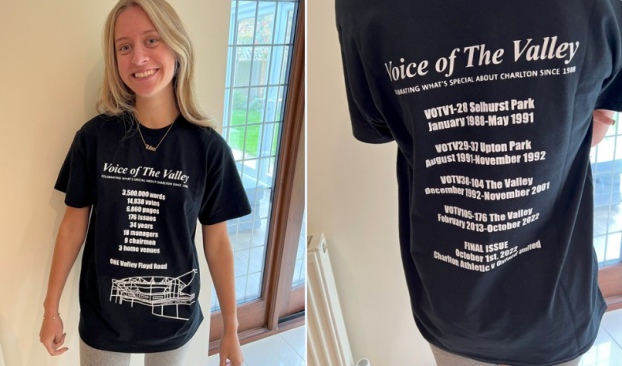 A number of people have asked about the T-shirts worn by our sellers at the Oxford game (once they had something to sell!). There hadn't been a VOTV T-shirt since the late 1980s, when we famously invited readers to join us in not giving "a XXXX for Selhurst Park". You can see one in the museum at The Valley.
Oddly, those no longer fit the editorial team, so we decided it was time for a refresh. We are now able to make the new ones available to buy (in the UK only) in sizes L, XL, and XXL, priced £14.99 plus postage. Please allow up to 14 days for delivery. We are not able to sell them outside The Valley.
All sizes are currently available.