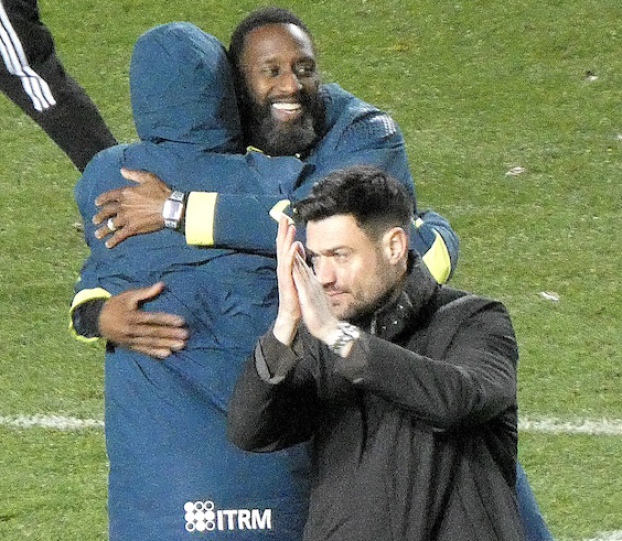 Working together well: Johnnie Jackson (foreground) and Jason Euell celebrate another three points at The Valley

The search for Jackson's right-hand man goes on

Even before Johnnie Jackson was appointed Charlton boss, MATT WRIGHT was already musing on who might complete the new first-team management line-up in VOTV171, published in November. Although the shortfall in senior staffing is now being discussed in the media by Jackson, the issue remains unresolved. Read Matt's orginal article below.

While the decision about who will next lead the Addicks looks increasingly straightforward, it’s not the only managerial verdict that will have a vital impact on whether Johnnie Jackson’s reign will be successful. Ahead of being appointed, Jackson will already have been considering the make-up of his backroom staff: who does he want? And what roles will they play?

As Alan Curbishley outlined in his autobiography, when constructing your backroom team there are a number of different approaches. When he took sole control, Curbishley explained he sought out Les Reed because he wanted someone who would offer something different to his own coaching style, even if few people at the time knew about the then director of coaching for the Football Association.

“In many ways he was much more studious and someone who would do things by the book,” said Alan. “When I’m coaching I might start at A but jump forward to E. Les would start at A and go through B, C and D before he got to E. I also knew he was excellent on a one-to-one basis, improving people’s skills and their understanding of the game.”

“Merv had done the rounds… he had a good knowledge of players from those at the top to others in the lower divisions,” explained Curbishley. “He had coached and also managed, doing a great job at Carlisle, and he’d worked in the Premiership with Everton.

“I felt I needed someone else with a different mix… Players love to have variety in their coaching sessions: it keeps the training fresh and it keeps them on their toes in the way they respond to what is being asked of them.”

Curbishley knew he also had to be sensitive with regards to Peacock, who had applied for the manager’s job when he and Steve Gritt had been jointly appointed in 1991.
“I knew the situation could be awkward because Keith may have felt he would be the new coach, but I told him that I’d decided to bring in someone from the outside. I also felt the role of assistant manager would be better suited to Keith.”

Watching how this triumvirate behaved and interacted with the players around Sparrows Lane during the Premier League years was fascinating. Away from coaching sessions, Curbishley was quite distant and often remained in his office, which he shared with Day rather than Peacock. Meanwhile, Day and Peacock were the more genial and approachable face of the coaching team, much more visible and often joining in the fun and pranks around the training ground.

A player visiting Curbishley’s office to ask why they weren’t in the team could expect to be told the blunt truth; away from such confrontation, Day and Peacock might offer an arm around the shoulder and a friendlier distillation of what the player might do to impress the boss.

An expert man-manager, Chris Powell had different requirements when he constructed his coaching set-up. He installed close friend Alex Dyer, then reserve boss at West Ham United, as assistant manager and promoted Damian Matthew to first-team coach. During his time in the Charlton academy, Matthew had helped start Powell on his journey as a coach.

Both were people Powell knew well and trusted and – importantly, as he tried to change the culture of the playing environment to what he believed a “Charlton ethos” should be – both had backgrounds at the club; Dyer as a player in the early 1990s and Matthew in the youth set-up.

Trust is often paramount when assembling your backroom team. What happens when that trust disappears was evident in August 1990, when then coach Mike Flanagan distanced himself from the tactics and decisions of manager Lennie Lawrence during a Charlton Chat radio programme. Flanagan was first suspended and ended up leaving the role he’d occupied for the three previous years.

The importance of team morale and a secure dressing-room environment means it’s crucial for all managerial staff to be singing from the same hymn sheet. While the manager will take the vast majority of the praise and criticism for any success or failure, the coaching unit must assume collective responsibility for all decisions. Otherwise the manager’s authority is undermined and small fissures quickly become large cracks.

When Curbishley and Gritt were appointed, one of the first decisions they made was that they would never contradict each other in public. And while Jimmy Seed’s relationship with trainer Jimmy Trotter (who would eventually succeed him), deteriorated drastically in the final few seasons of their 22 years working together, Seed nevertheless later insisted their opinions had rarely differed when it came to “tactics and playing policy”, and that Trotter had always supported whatever decision he made.

It’s not clear how much input Nigel Adkins was given in the formation of his backroom staff. He had previously installed Andy Crosby as his assistant manager during his time with Scunthorpe United, Southampton, Reading, Sheffield United and Hull City. Crosby had recently joined Port Vale when Adkins was appointed, but even so, it’s hard to believe he would have chosen Jackson and Euell in similar roles to the ones they were already occupying had he been given completely free rein.

It could be argued that the accompanying messaging that suggested Jackson was being lined up for the role in the future also weakened Adkins: “Welcome Nigel! (and please help us nurture Johnnie Jackson, whom we believe will be good enough to replace you before too long…”).

The selection – or imposition – of another backroom team at Charlton is thought by many to have played a significant role in Iain Dowie’s lack of success as manager. When Curbishley left, a new structure was devised that saw Dowie appointed as head coach alongside Reed and ex-Addicks winger and academy coach Mark Robson, plus former agent Andrew Mills as general manager. But there was no place for Dowie’s brother Bob, who enjoyed a senior role working alongside his sibling at his former club Crystal Palace and at Coventry City, whom Dowie joined after his dismissal from the Addicks. Indeed, the continued presence of Bob Dowie – while still a Palace employee – in Charlton’s first-team dressing room against the express wishes of senior Addicks executives was one of the factors that led to Dowie’s departure. 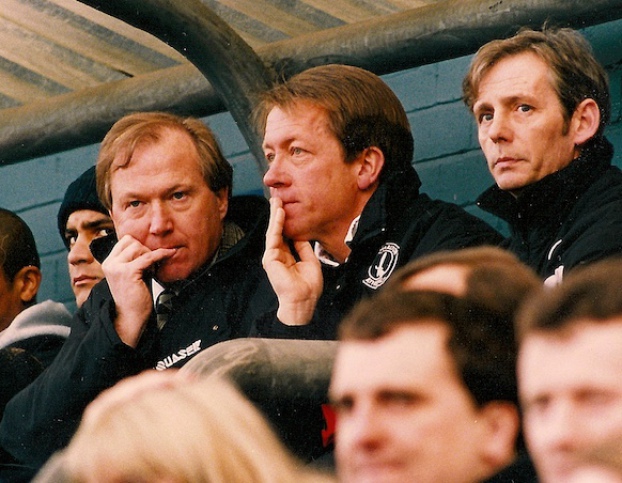 Les Reed (left) with Alan Curbishley and physio Jimmy Hendry, was key to Charlton reaching the Premier League
Given the mediocre qualifications of Roland Duchâtelet’s appointments as manager, it would be hard to argue that the backroom staff they brought with them played any substantial role in their success or not. Among the largely forgotten names from that era were David Martane (Guy Luzon), José  Jeunechamps (José Riga’s second spell) and Patrick van Houdt and Guy Kiala (Bob Peeters).

Van Houdt was actually Peeters’ brother-in-law. On his arrival he asked the club’s communications department for a print-out of the players’ images alongside their names. Unfortunately, one player accidentally missed off the list was Joe Pigott – it was probably just a coincidence that the striker was missing from each first-team squad named over the next few weeks.

Having been at Charlton for the last 12 seasons, that’s unlikely to happen to Jackson.
And with Powell recently offering the South London Press some insight into the depth of Jackson’s thinking around his career off the pitch, the decision about who his backroom staff might be will have been uppermost in his thoughts.

“We spoke for about 45 minutes… about the role of an assistant manager,” Powell told Richard Cawley, recalling a conversation before last summer’s European Championships. “He wanted to get more knowledge about certain aspects of the role. That just shows continued development and learning. He wanted to be better in that position, but ultimately he has ambitions to be the number one.”

While it looks certain that Jason Euell will be part of Jackson’s team, there are other factors. Euell is also part of the England U20 set-up, which left Charlton shorthanded recently, with U23s coach Anthony Hayes helping out for the Papa John’s Trophy match against Leyton Orient as he did under Adkins against Southampton U21s.

Apparently highly rated in coaching circles, Euell also has managerial aspirations of his own; he has twice applied for the AFC Wimbledon job, most recently at the start of this year, and is believed to have turned down the offer of joining the first-team set-up during the Duchâtelet era because he thought, rightly, it wasn’t a good long-term decision.

One place Jackson could turn is to those with whom he has taken his coaching qualifications. Completed last June, the UEFA Pro Licence takes 18 months and coaches tend to form lasting relationships with those they work alongside. When Frank Lampard was appointed as Chelsea manager, he named Anthony Barry, then assistant manager at Wigan Athletic, as his first-team coach after establishing a close relationship while doing their Pro Licence.

Among Jackson’s 2021 group were former Chelsea defender John Terry, Wigan Athletic manager Leam Richardson and former Addicks women’s team skipper Casey Stoney.
But one outside bet might be another graduate from the summer, an old teammate of Jackson’s at Tottenham Hotspur and a former Addicks defender from the Premier League years: Chris Perry, currently a coach at Millwall.

“You form a tight bond because you spend a lot of time together, you’re going through the same thing,” said Jackson on completing his course. “I played with Chris at Spurs and I’ve known him for many years… you form a real close bond with the group because you’re on the same journey together.”

Whether Perry is on Jackson’s list only he knows. But as the results rack up and it becomes less and less likely that owner Thomas Sandgaard will turn anywhere else, we’re soon
going to find out.