A tale told on home turf 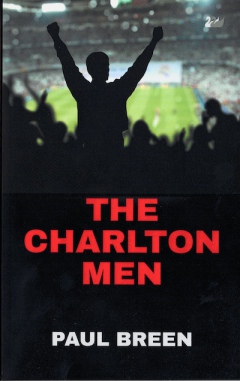 The cover of this paperback – showing the back of a celebrating football fan silhouetted against the blurred image of a stadium that appears to be Wembley – doesn’t do the contents justice.

I enjoyed Paul Breen’s story so much that I devoured its 241 pages in one sitting, but it had taken me a while to pick the book up after it arrived because I wasn’t encouraged by the way it is presented.

That’s a shame, because it might affect the chances of The Charlton Men finding the audience it deserves. This is not a book about the Addicks, but it does use the team’s triumphant 2011/12 campaign as a back story.

It is equally about Greenwich – the town rather than the borough, although Eltham and Blackheath also feature – and will appeal to some SE London readers on that basis too.

It tells the tale of a British army veteran who has lost part of a leg in Afghanistan and a newly arrived Irish immigrant, the former a diehard Charlton fan and the latter in the process of becoming one.

The two meet and quickly become friends. But their search for meaning is personal, not political, and when their relationship is tested it is over a woman, not the politics of their past.

There is much more going on in these pages than a love triangle, however, and it is significant that the story opens in the week of the London riots, the more specific relevance of which slowly emerges.

The narrative unfolds on familiar territory, whether that is along the south bank of the Thames, at Greenwich’s historic naval college, next to Sam Bartram’s statue at The Valley, or in the east stand.

The town of Huddersfield and its football club also take centre stage and not just because the narrative features the end of the latter’s unbeaten run on a memorable Monday night in SE7. Breen is an effective story-teller and his tale is a credible and well-structured one.

He is a clever writer, although at times I felt he had put statements into the mouths of his characters that stretched credulity. Would Afghanistan veteran Lance really tell his new Irish friend Fergus that a promoted Charlton would be able to buy players as good as Colchester United goalscorer Wordsworth “in order to make our own poetry in the second division next year”. That feels more like a journalistic flourish than reported speech to me.

This is a work of fiction, so Breen is entitled to take some liberties. I never heard anyone chant “Chrissie Powell’s men are we!” or call midfielder Danny Hollands the “flying Dutchman”.

But useful as the football club’s story is in anchoring the tale, the author also has to accept that supporters are both knowledgeable and obsessive. They will pick up on any inconsistencies.

My recollection is that Sheffield United’s 2-2 draw at Stevenage had not finished when Charlton reached full-time in their match at Carlisle United’s Brunton Park on the penultimate weekend, so we had to wait for promotion to be confirmed.

More jarringly, we are told that the team did not make the play-offs in 2010 and that the 1985 move to Selhurst Park was only intended to be temporary, when in each case the opposite is true.

In Breen’s defence, however, the latter two are Lance’s recollection of events and therefore do not have to be treated as definitive. This highlights another characteristic of the novel. Although it pays homage to 1992, Bartram, the FA Cup winners of 1947 and the 7-6 match a decade later, it was transparent that the author’s own perspective is closer to that of his Irish character.

His is not the club that had spent eight comparatively recent seasons in the Premier League, but rather the diminished one battling to get out of League One. Lance’s Charlton tattoo had “kept me going… like a torch in darkness” in Afghanistan and he recounts his grandfather’s stories about the club to Fergus, yet he is strangely reticent about the likes of Clive Mendonca and Alan Curbishley, who would surely be his own heroes. Or even about Alan Pardew.

The author also attributes more weight to the Johnstone’s Paint Trophy home defeat by Brentford than some of us would think appropriate, suggesting that: “The bubble had burst.” I think not.

That might be a mistake, but generally the perspective of a newcomer is every bit as valid as that of older hands. It is just different.

One passage that might strike a stronger chord with older readers is Fergus’s reaction to the level of abuse directed at Huddersfield fans from the back seats of an official Charlton supporters’ coach as it departs after the Addicks’ defeat.

As it happens I was the person in charge of away travel at the time and I don’t doubt the plausibility of the Irishman’s discomfort, although I would like to think the description of “drunken, coke-eyed teenagers” is slightly overblown. But perhaps in this case it is me who is naïve.

It would be churlish to deny, however, that this is very recognisably Charlton’s promotion campaign and the vibrant presence of manager Chris Powell is properly represented, with suitable tribute paid to the key players and events as seen from the stands.

Fiction is hard enough to write well without having to deal with the pedantry of people like me, but I am reviewing the book for a Charlton fanzine, after all.

Ultimately, the novel depends not on the accuracy of its depictions of the Addicks but on the strength of the storytelling and the neat construction and resolution of the plot. It also picks up on issues such as knife crime and gangs that threaten people’s well-being as they go about their everyday lives in some of the London boroughs, but in a balanced and realistic way. You never feel you are being lectured.