Watt's the story as Valley faithful bask in sunshine start 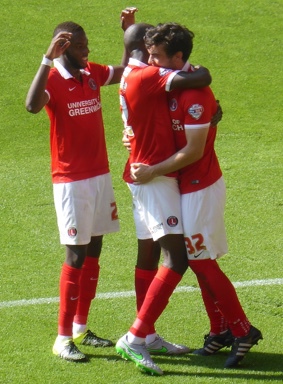 Those familiar with an English summer will know that when the sun shines it is better concentrate on enjoying it, rather than worry about whether it will do so again next week or next month. Or indeed wonder why it did not come out the previous day.

Much the same might apply to Charlton at the start of the 2015/16 season, which began with a deserved and well enjoyed win over relegated Queens Park Rangers, repeating the vistors’ fate 18 months ago in what proved to be manager Chris Powell’s last hurrah at The Valley.

Much water has flowed past the Thames Barrier since, some of it very choppy. And even the build-up to this match was soured for many supporters by the club’s abysmal handling of the season-ticket process, the blame for which it tried, implausibly, to pin on Royal Mail. The frustration of those affected by the chaos of the previous week was understandable, but for the majority whose tickets had arrived it was no more than the sound of distant thunder.

Some who did get their season tickets were annoyed to find the club was still not taking coach bookings for the following week's away games, while there were a number of issues on the day with Valley Express.

The access system appeared to work pretty well, however, and the print-at-home option is likely to be a boon to both supporters and the club, since it cuts down on the need to post, queue or collect. One can hardly say that Charlton have embraced the future, since the technology has been commonplace elsewhere for some time, but at least they have arrived, belatedly, in the present.

Based on the attendance figure of 19,469 some of the turnstiles may have been configured to count double. Or perhaps thousands of season-ticket holders were on holiday. Whatever, it’s unlikely there were many more than 16,000 in the ground, despite a sold-out away end.

Elsewhere, and contrary to promises made to the Fans' Forum, the programme sales operation continued to be a comedy of errors, with too few sellers, pitches repeatedly selling out and long queues for those that did have supplies outside the ground. The new sales stands are smart, though.

Opening up the north stand lounge to all is sensible and likely to be popular, although the children’s entertainment provided on the east concourse from midday to 1.30 appeared to belly flop, unsurprisingly given the timing and limited eligibility, with only a tiny number of youngsters taking it up.

Some fans in the east stand were unimpressed with the promise of “real ale coming soon”, as though no one had told the caterers the date for the start of the season.

The new big screen looks sharp, albeit the main problem with the old one was that it had failed, but the majority view appears to be that fans could do without the live feed and would prefer line-ups wth the in-match action to be limited to permissible replays. It will be interesting to see if anyone is listening.

Meanwhile, an untidy mob of QPR supporters was given an ill-advised pre-match walkabout down Harvey Gardens and Floyd Road, apparently on the decision of “out-of-borough” police - a club explanation that seemed to treat the Metropolitan force as if it has competing command structures, and which cannot of itself explain the mistake.

Then there was the football - never an afterthought but only ever reached at Charlton upon navigation of numerous obstacles and diversions.

Head coach Guy Luzon’s decision to leave Tony Watt on the bench, apparently as a consequence of a training ground misdemeanour, might have backfired spectacularly had QPR taken a first-half lead.

Instead, Watt came on at the break and eagerly added the necessary energy and menace to a first-half showing that had still been satisfactory without him, scoring one goal and contributing to the other.

However, the question in the minds of most of the Addicks faithful related to the seven new faces - how many we would see and how they would fit in. There the news was overwhelmingly positive, with the busy Ahmed Kashi making the outstanding impression.

Central defender Naby Sarr was absent and Cristian Ceballos was restricted to a time-wasting late substitution, so judgement on them must be deferred, but even Zakarya Bergdich - who replaced El-Hadji Ba with a quarter of an hour left - provided a promising cameo.

Simon Makienok’s dummy to set up Watt for the first goal was a treat, while credit must go to slightly older hands Alou Diarra and Nick Pope who impressed in particular.

Pope is not quite “one of our own”, having been signed from Bury Town aged 19, but he’s been at Charlton for four years and it would certainly please the home support to see him overcome previous wobbles to establish himself at least as Stephen Henderson’s deputy.

There was also the pleasure of Morgan Fox’s first goal for the club to savour, but everyone played their part in a thoroughly satisfactory start, including it must be said Luzon, who was warmly received by the crowd at the end.

Part of the bubbling excitement around The Valley is bound to be rooted in the increased optimism the QPR match provided for the season to come, and rightly so. The team and management staff deserved the cheers. But it’s best, as I said, not to try to predict the weather too far ahead. For now let’s just enjoy the present sunshine.