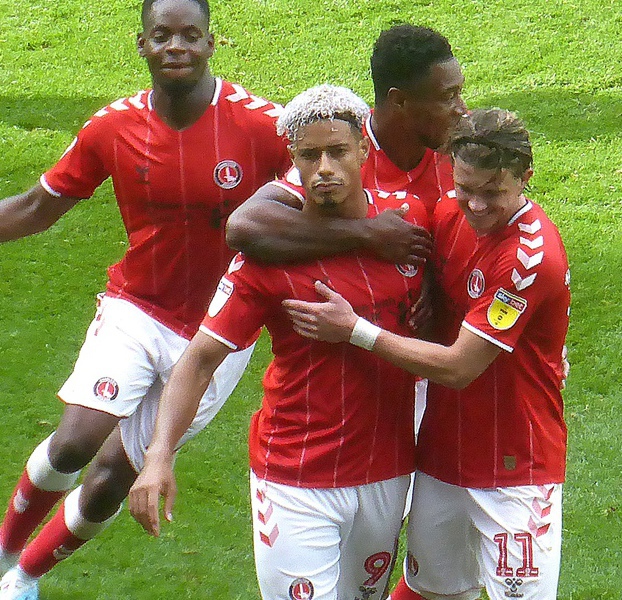 Lyle Taylor (9) after scoring for Charlton in 2019. He has been outspoken on various issues, including racism

Black Lives Matter is an issue for Charlton too

Charlton’s relationship with race issues is an interesting one. Sometimes it feels like a story of snakes and ladders when for all the work the club has done in the area of racial equality, some idiot hits the headlines for singing songs about Stephen Lawrence on a crowded train.

Kevin Lisbie features in such songs too – something I witnessed myself on a Valley Away coach up north a few years ago. Such a song didn’t shock me, considering some of the other things that were shouted out through the coach windows about “northern paedophiles”, “northern shitholes”, etc, but the silence of other passengers did surprise me.

Yes, I had the same power to speak out but being alone, knowing nobody else around me, I chose not to. I vowed then not to go to another football match but the lure of Leyton Orient a week later proved too much. It was our promotion season under Chris Powell and a few bad apples shouldn’t spoil the whole barrel.

Until that day, in nearly half a decade of following Charlton, I honestly hadn’t heard anything racist from our supporters. Since then, I’ve heard nothing voiced at games but know that there are supporters who might engage in what they see as harmless banter but which alienates supporters from ethnic minority backgrounds. But I believe that on a match day when The Valley’s crowded we have far more BAME supporters than we have racist supporters.

At the same time, I wonder what would happen if we went back to watching live football and Charlton players made gestures of solidarity with the Black Lives Matter political movement. I imagine it could be an uncomfortable experience for some supporters but that is only speculation. It may even be uncomfortable for some players. Some might say that there’s no place for politics in football and yet the sport has become heavily politicised and militarised in the past ten to fifteen years.

The way that poppy wearing has been enforced is one example. Though a contentious topic, it is highly political to pressure footballers from colonised countries into wearing symbols that have associations with war and colonisation. For example, a player of Kenyan background may be quite happy to celebrate the defeat of fascism but would struggle to have to endorse the way that the military behaved towards his people at the end of the colonial era. He should have the right to play football in a neutral space with no symbolism.

This is the sort of thing that needs to change before black lives can be said to have equal status in Britain and that’s where the real difficulties are going to come for football further down the line.

I don’t know if football is ready for its players to have opinions that challenge the views of supporters in the terraces. That’s not talking about things like Lyle Taylor’s distaste for socialism which he tweeted about. It’s whether or not we can actually accept that black players are empowered to challenge the systems and attitudes that surround them. And that out of respect to our players, we too as fans challenge anything that is racist. For example, if a newspaper such as The Sun treats one of our players the way it has treated Marcus Rashford or Raheem Sterling, where would our first loyalty be? Would it to be to the paper or to our player?

Speaking about one of ours too, what about conversations around Lee Bowyer’s past actions? Some might say that should not be discussed but if this BLM movement gathers momentum, this is the exactly the kind of topic that will be discussed. And it can’t just be dismissed as not being very classy or disloyal to talk about it, as happened when the chair of the supporters’ trust commented on it in 2018.

In Bowyer’s case the reality is that he made bad mistakes when he was young. He has moved on from that and may be quite happy to talk about the lessons from it. Football supporters and the sport in general need to do the same in confronting difficult conversations, not just ignoring them.

There certainly seem to be a lot of difficult conversations coming football’s way before and after the virus situation has been resolved. Thankfully Charlton, as a club, seems better equipped than some to handle them. Going back to the board game comparison, there are a lot more ladders than snakes in the history of this club when it comes to racial equality. Charlton Athletic and its fans been at the forefront of trying to stamp out racism for decades, not just in the vicinity of The Valley but in the broader community and the borough in which it is based.

It was Charlton fans, through the old Charlton Athletic Supporters' Club, who took a national lead by delivering the first Red, Whte and Black days at The Valley. Greenwich Council established the Charlton Athletic Race and Equality Partnership (CARE), which has supported a range of anti-racism initiatives in Greenwich, following the murder of Stephen Lawrence. That now continues under the Charlton Athletic Community Trust.

This work culminated in the development of the Sports Charter for Racial Equality (SCORE) which was rolled out across South London. The community trust has been involved in other ground-breaking initiatives such as Street Violence Ruins Lives, which is something that shows how well some of these projects have transcended race and crossed social boundaries.

For most people, though, the club is represented more by the players on the pitch than such community initiatives. In this area too, Charlton has been ahead of the field for a long time. The club has a long history of giving young black players their first opportunities in the game. Ben Odeje, for example, was on Charlton’s books when he became the first ever black player to play internationally for England at any level after featuring in the schoolboys’ squad against Northern Ireland in 1971. Though this was not formally recognised for decades, he later became an ambassador for CACT.

Similarly, as a club, Charlton has been a home for various people who have been strong ambassadors for racial equality within football, including Paul Elliott. Although his time at Kick It Out had a peculiar ending, he was a powerful and influential voice in the area of recognising the rights of ethnic minority footballers.

Significantly too Elliott has long been mooted as one of those saviours from the past who might return to The Valley as part of a consortium to rescue the club from its present predicament. Bizarrely, this is not the Paul Elliott who has ended up taking over the reins and interestingly it says a lot that our fanbase would much prefer the defender who started his career at Charlton to another unknown businessman.

There’s little opposition within our fanbase to the idea of being owned or managed by someone from a minority background. The proof of that was in the way we welcomed Matt Southall into the club before realising that the ESI takeover was not all it claimed to be. The tide turned against Southall and his crew not because of race but because of their approach to doing business which came across as asset-stripping.

So, when it comes to structures at the club, most supporters would have absolutely no issue with power being in the hands of someone from a BAME background. But it’s the everyday issues that we all have to take more of a stand against, such as those highlighted by Lyle Taylor, who may not be flavour of the month right now but isn’t shy of voicing opinions. He has talked about eradicating abuse during games and on social media.

Probably that’s the best place to start and something we can all play a part in, if we want to. Whenever we see racism on any forum or any derogatory references to players past or present or the causes they believe in, we should be unafraid to call it out. But like the witnessing of that incident on Valley Away, it’s a hard thing to do sometimes.

And it’s not just black and white, a point that the west and even BLM has been missing. With Covid-19 there’s been a growth in negativity and racism towards people perceived to be of a “Chinese” background. I’ve seen it on forums among supporters and have seen quite extensive arguments where people have called out such attitudes.

In one case that was more being seen to be right than being racist, there was an implication that WE won the war and therefore didn’t need to worry about a foreign virus. It is that sense of "we" which goes to the heart of why black players might want to make a symbolic gesture at games now or in the future. Our game is their game too and right now very much theirs, because we can’t even watch them in the flesh.

Hopefully we will soon be able to forget about the virus and go back to watching live football matches. When that day comes, whatever happens with the game, we’ll recognise the right of players to support causes they care about, even if I guess not everybody’s going to agree with them.

Paul Breen is the author of The Charlton Men & The Bones of a Season. He is @CharltonMen on Twitter.