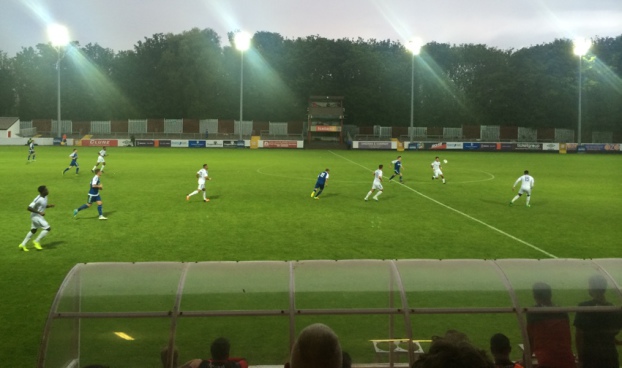 from Paul Breen in Dublin

The holiday season ended in some style for Charlton with a comfortable victory over Crumlin United in the first game of their pre-season tour, in what was an away match for both sides. Crumlin, who play in the Leinster Senior League (part of the third tier of Irish football), had borrowed Richmond Park, home of Saint Patrick’s Athletic, for the night to celebrate their 50th anniversary with a special challenge match.

Many Addicks had made their way across the water for the match, including awayday stalwart Seb Lewis, the Red Army Youth faction (according to stickers left in the toilets of the local pub) and some London Irish following their favourite team, home from home. On the night they were joined too by a few Addicks already based in Ireland, gaining a rare opportunity to see their team in the flesh.

Though the weather has hardly been kind to fans or players on this pre-season tour which started on July 3rd, the sun shone on the start of the evening. Enjoying the friendly atmosphere, everyone seemed to be in high spirits from the outset, fuelled by plenty of Guinness and whiskey sampling on the way to the match. Earlier in the day, one merry band of travellers had even managed to unfurl a ‘Roland Out’ banner on the steps of both the Guinness Brewery, and the Jameson Distillery – all in good spirits of course!

Richmond Park, the small and characteristic ground in the Dublin suburbs, a 15-minute tram ride from the city centre, further added to the atmosphere. Both home and away supporters, and Irish Addicks somewhere in the middle, were bunched together on either side of special guests, directors, chief executives and so on. Even the Garda Síochána joined in with the banter from some young Charlton fans who jokingly asked them not to burn their flags.

"Other part of the emerald isle," I wanted to tell them. "The part that me and big Josh Magennis come from is where they do such things in the summer time." But I kept quiet and left them to hang their flag out over the wall of a beer garden, as the bemused Garda watched on, enjoying the craic.

Before the game, the club had been boosted by the news that Ricky Holmes has signed a new three-year deal, but the star midfielder was not amongst the first contingent of players to take to the field.

Just like the annual pre-season warmer against Welling, two different sets of players lined up in each half. Charlton lined up for kick-off with a mix of old and new in the side, including the elusive Naby Sarr taking his place at the heart of defence. The first eleven players on the pitch took shape as - 1. Dillon Phillips; 2. Chris Solly, 3. Johnnie Jackson; 4. Nabby Sarr; 5. Patrick Bauer; 6. Andrew Crofts; 7. Cameron Stewart;  8. Cristian Ceballos; 9. Lee Novak; 10. Tony Watt; 11. Tariqe Fosu-Henry.

Right from the off, Charlton, kitted out in an all-white strip, were up for the battle, fired on by Karl Robinson’s rousing chorus from the sidelines. But Crumlin were out to show they meant business too, with the part-timers in blue shirts dishing out a few tough tackles in the early stages, including a couple directed at Watt who must have felt that he was back in Scotland playing Rangers. But in a flashback to performances from his first months at The Valley, Watt soon showed the flashes of brilliance that everyone has seen in him, but which he has never been able to sustain for a whole season.

Twenty minutes into the match, Charlton’s No 10 got on the end of a cross from Fosu and headed his side into the lead. Even before the goal, the link-up play between these two had been excellent and shows promise for the season ahead.

Fosu could turn out to be a real gem unearthed by Karl Robinson. Novak on the other hand appears to have passed his best before date in a Charlton shirt, and cut a frustrated figure in the forward line. Right from the off, his body language seemed that of a player who knows his time is up at The Valley, particularly with several strikers already in the ranks and Robinson talking of adding one more.

After Watt’s goal, the Irish team remained up for the fight and had one excellent chance saved by Dillon Phillips before any hopes of the game becoming a contest crumbled on the half hour. Ceballos, whose crosses wouldn’t even scare vampires, directed a weak effort from the left side of the pitch towards goal. Somehow Mickey Quinn, the Crumlin keeper, managed to fumble the effort into the back of his own net in one of those scenes that would be impossible to fake on You’ve Been Framed. Two minutes later, Watt added his second and Charlton’s third to drive a stake through any hopes of an unlikely comeback.

Goalkeeper Mickey Quinn did though manage to redeem himself with a couple of decent saves at the close of the half, including one from a deflected free-kick taken by Jackson. That at least gave the part-timers some hope for the second-half turnaround in players.

Regarding lessons learned in the first half, Fonsu and Watt excelled in their link-up play, and if they can establish a chemistry with Holmes, fans can expect some free-flowing football at The Valley this coming season.

Elsewhere, a defence built around Solly and Bauer gives hope for consistency at the back but the jury remains out on Sarr. Despite proving that he can pass the ball reasonably well, he remains flustered under pressure and against League One opposition basic mistakes could prove costly. Stewart too remains one on whom the jury is out because even though he has skill and passion in abundance, he seems a bit lightweight.

Fresh lessons and new hopes emerged in the second half too as Robinson sent out a different eleven, complete with the presence of the best hair seen on a Charlton head since the passing of Diego Poyet into East London anonymity.

Right from the off, the new Addicks went for hell for leather against the tiring part-timers, who made several substitutions with just five minutes of the second half gone. Almost immediately, two players stood out as being at the heart of a series of nifty attacking moves – Holmes, as expected, and the promising Barnes. Constantly pushing forward, the 20-year-old showed signs of being one to watch in the season ahead.

Despite the Addicks’ attacking play though, they failed to turn an abundance of chances into further goals as the rain began to fall on Richmond Park. It wasn’t until the 73rd minute that Joe Aribo burst forward in a moment of skill and power that had the Crumlin fans comparing him to Manchester United’s new 75 million pound man Romelu Lukaku.

Here, Charlton’s Lukaku combined with Holmes, our Andre Agassi according to Watt, and the player of the year curled home the fourth of the evening in Dublin’s summer rain.

By then, the bustling presence of Magennis had been added to the equation, coming on to replace his fellow Irishman Billy Clarke, whose first showing in a Charlton shirt was energetic, if nothing spectacular. After a couple of misses and a sense of being a wee bit rusty after his return from later holidays because of international duty, the big man from Northern Ireland added Charlton’s fifth of the evening with a strike to the bottom corner from the edge of the box. 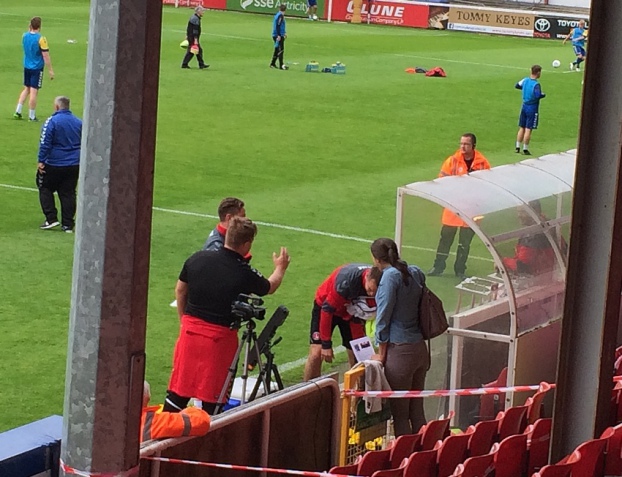 Hard at it: chief executive Katrien Meire has accompanied the team to Ireland to add her unique insight

Five-nil and at this stage it was over, but the Addicks still pressed for more in an encouraging sign of being up for the fight in the season ahead. Come the end, even if one goal less had been scored in the second half, there was plenty to be positive about for the coming season.

Apart from having a homegrown Lukaku and Holmes’ signature fresh on a new contract, the return of Kashi and the rebirth of Watt offers hope for the months ahead. So too does the immediate impact made by Fosu, and the promise of Barnes. There is still though a need to bolster the squad in a few areas because there are players who, for different reasons, might not offer much in a competitive season.

On the whole though, there seems to be a good spirit in the squad even if Crumlin hardly provided the sternest of opposition. The forthcoming friendlies against Norwich City and Ipswich Town are more likely to serve as a measure of this team’s potential than the three games on the Irish tour or the weekend matches against Welling United and Greenwich Borough.

This two-part trip to Ireland, after all, is really about gelling the squad and building up a bond between players for the season ahead. Hopefully that has been achieved, because regardless of positions on the ownership issue, everybody wants to see Charlton doing well, whether they choose to watch games at The Valley or further afield.

It was great to see so many people turning up in Ireland to cheer on the team, and hopefully there will be a lot more cheering on rainy nights in faraway places before the season is out.

Usually though pre-season friendlies are a guide to how the early months of the season might pan out and if that’s the case, things are looking up on the playing side at least. The issue though over the course of the season is whether this mood, quality, and confidence can be sustained for the long haul of a promotion fight.