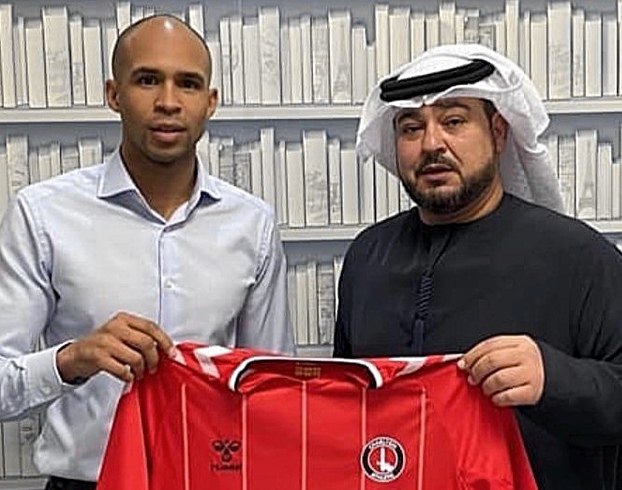 Guess who's back! Tahnoon Nimer (right) has reasserted his control of club owners ESI with Farnell's sacking

It’s been a bad few days for Chris Farnell. He has seen a plan to install former Southampton boss Dave Jones over Charlton recruitment supremo Steve Gallen and manager Lee Bowyer blocked by the club’s board and this morning found himself publicly sacked as club lawyer.

The moves are the culmination of deteriorating confidence in Farnell from Charlton and ESI director Marian Mihail, who has become the public voice of majority shareholder Tahnoon Nimer.

Mihail first exposed the communications gap between himself and Farnell when he revealed in early June that he had previously been unaware of the takeover approach from ex-chief executive Peter Varney and businessman Andrew Barclay, despite the first discussion between Farnell and Varney having been a month earlier.

Farnell has issued his own statement confirming that he has been “informed by one of the club’s directors that my relationship with Charlton Athletic FC has been brought to an end”, but immediately moved to justify what is likely to be a substantial financial claim, referring to “significant work undertaken” which “I believe greatly improves the prospect of Charlton Athletic FC remaining in the EFL”.

With that he dropped long-serving club secretary Chris Parkes under a passing bus for the second time in a fortnight, by stating that it had “become clear that one of the consequences of the boardroom dispute at Charlton was its likely expulsion from the football league”.

Parkes had publicly assured fans that there was no talk of that in a statement published on the club website just 12 days earlier: “I can confirm there was not one mention of the club being expelled from the league," he wrote of discussions with the EFL.

“I know some people have compared our position to the sad situation at Bury but this is a completely different set of circumstances". He also said “by my reckoning the new ownership will be approved” – but in fact the EFL announced a week later that its board turned down both Farnell and supposed new chairman Paul Elliott.

However, it remains to be seen whether this is the end of ESI2, as the Elliott-fronted group is known by fans. At least two other people have been put forward to the EFL for its owners’ and directors’ test and still awaited decision.

And despite claiming in his statement that he “was never a director or owner of the football club, nor was I ever intending to be”, Farnell told Sky Sports News that both his and Elliott’s appeals against disqualification will continue.

That is contradicted by the apparent EFL position that applications and appeals can only be made by clubs, and Mihail has already told them that the Elliott takeover is over.

It’s somewhat surprising, if correct, that specialist sports lawyer Farnell doesn’t understand that, as was his willingness to become a director of club owners ESI in April, which brought him within reach of the EFL approval process.

Farnell has also publicly stated that he has put money into the club, alongside Elliott, to help pay the wages, which is not the normally the role of someone acting solely as a lawyer.

It remains to be seen, however, if this is truly the end of ESI2. There have been suggestins in recent days that the sale and purchase agreement to transfer the club from Nimer and Matt Southall’s ownership is not, as previously claimed, contingent on EFL approval of the takeover.

This would contradict evidence given in court in Manchester on July 17th, when Southall’s unauthorised removal of multiple ESI directors was ruled unlawful, as well as begging questions about a failure to update Companies House within legal timeframes and whether submissions to the EFL have been truthful.

The club website was still claiming this lunchtime (August 11th) that “East Street Investments were taken over by a consortium led by businessman Paul Elliott on June 10th 2020” and Farnell has previously claimed that Elliott owns the club.

There is potential for a legal battle over that issue, although Voice of The Valley understands that Elliott confirmed to potential alternative buyers Peter Varney and Andrew Barclay in a meeting in June that he had no significant money himself.

The January takeover by Nimer and Southall is still the subject of EFL investigation because they never provided evdence of source and sufficiency of funds.

Fans will now want to see progress on the Varney/Barclay bid. Farnell had been hostile towards Barclay from the outset and did not appear willing to progress discussions with them with any urgency. There has been significant misinformation circulating internally and externally about their intentions, including false briefing about them not having access to sufficient funds or wanting to redevelop the ground themselves.

A big problem, however, is the unknown extent of liabilities incurred by ESI since January, which in effect makes it hard to know what a buyer is taking on.

Beyond that there remains the issues of the punitive terms agreed by Southall and Nimer with former club owner and continuing landlord Roland Duchatelet, which put a £50m price tag on The Valley and Sparrows Lane.

There remains the strong possibility that the club will need to go into administration to clear the decks of such liabilities, which would incur a 12-point deduction in League One.

There is also no certainty about which party would end up taking over the club by that route, with the potential for others to break cover. Former chairman Richard Murray has been persistently rumoured to be working with others to assemble a rival bid.

Such approaches would be unlikely to be able to match the financial clout available to Varney and Barclay, but might be more willing to entertain Duchatelet’s continued ownership of the stadium and training ground.

Murray is also one of seven ex-directors owed a combined £7m, which would have first priority if the club goes into administration. Any unpaid amounts would fall on Duchatelet under the terms of the debentures.

Meanwhile, leading councillors in Greenwich remain determined to prevent any attempt to build on The Valley, which should act as a deterrent to property developers. Voice of The Valley is among those to have spoken directly to the council on this issue.

With the season just one month away and a transfer embargo in place up to now, as well as new salary restrictions adopted by clubs last week, Bowyer and Gallen face a stiff challenge assembling a squad strong enough to challenge for promotion. They, more than most, will want a speedy resolution to the latest ownership drama. For all that, the latest developments should be seen by Charlton fans as unreservedly positive.

For Marian Mihail, it will have been a memorable week. As well as being at the heart of the decision-making that removed Farnell, he is due to get married on Thursday.