All fall down . . . the takeover saga 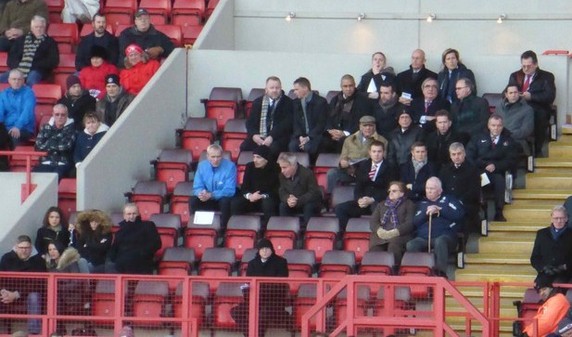 As we reach the third anniversary of the occupation, as I like to think of the current ownership of Charlton Athletic, a wind of change is blowing down Floyd Road (writes Rick Everitt).

Even the club’s official website has reported the takeover interest of 67-year-old Belgian political activist and businessman Roland Duchatelet, who is already the effective proprietor of a string of other European clubs, most notably Standard Liege.

Charlton chairman Michael Slater was quoted on Saturday, December 28th, as saying of the Duchatelet bid: "Very constructive discussions are ongoing which we hope to conclude soon.”

This followed a Daily Mail website report the previous evening claiming a £14m deal to buy the club had already been struck with the Belgian, itself the latest in a string of takeover leaks, some more half-baked than others, to both the Mail and the South London Press.

Duchatelet’s background has been fully explored by Weegie Addick on the Charlton Life forum and needs no significant repetition here. There will be time enough to look further if his bid succeeds and the views of supporters are unlikely to play much part in that either way.

Of more immediate interest is the fact that the negotiations appear to have hit an obstacle since the weekend, just a month after previous America suitor Josh Harris walked away when a deal appeared to have been done.

Other interest, real or imagined, is also believed to have foundered at an advanced stage over the previous year, begging the question what it is that can be lurking in the Charlton books to deter these would-be buyers.

It’s unlikely to be the club’s trading performance, which despite official attendances that bear limited relation to the numbers actually watching matches at The Valley, is a relatively open book.

A due diligence report leaked to Voice of The Valley via Sky City editor Mark Kleinman in August showed the owners projecting an annual funding requirement of £8m in the Championship.

Thus nobody can be under any illusions that this is anything other than a heavily loss-making business and that it is likely to remain so until and unless the team returns to the Premier League.

Its costs are such that it is literally impossible to balance the books or get anywhere near doing so on football alone without the injection of top-flight TV income, which itself is bound to require significant investment in the team.

Even building housing on The Valley would be unlikely to offset the cost of acquiring the club, while a potential new stadium on the Greenwich peninsula - mooted by the club in its due diligence document and likely to be embraced by the council - would cost much more and have to overcome a complex series of practical and land-ownership obstacles.

In any event a would-be purchaser who wants to run the football club is almost bound to target Premier League football and will need to have the resources to make this a reality.

Football has long been plagued by wannabe owners who do not have the resources to finance their ambitious plans, but Harris and Duchatelet do not fit that description.

Neither does a third interested party, also European based, of which Voice of The Valley is aware.

But yet again, it appears, an apparently serious interest in buying the club, in the form of Duchatelet, is not progressing as smoothly as anticipated.

Notwithstanding any last-minute renegotiating over price - £43m in the summer, reportedly £18m in November and now apparently down to £14m - or possible attempts to play the bidders off against each other, using the media as a tool, the most likely cause is the structure of historic debt.

As well as approximately £20m in loans outstanding to the present owners, who include former chairman Richard Murray, there is still roughly £4m owed to RBS subsidiary Lombard, a likely £800,000 overdraft to regular bankers HSBC and a further £8m to Murray and six other former directors.

The bank loans are secured on The Valley and the Sparrows Lane training ground, while the £8m is only repayable in instalments of one fifth each year after the club returns to the Premier League and all but £1m of this, outstanding to Murray, is interest free.

However, the due diligence report confirms that “the loan agreement states that should there be a change in control, that Club (sic) will be required to repay the loans immediately in full”.

In practice, this means Murray and the former directors have the right to receive their money back at the point of takeover, even though they would never get it back if the club is not promoted under the current owners.

It is highly likely some or all of these long-term Charlton supporters would agree to roll the debt over or at least renegotiate its terms, as they must presumably have done in 2010-11, but it is a considerable complication.

A more formidable obstacle still is potentially posed by the banks. The HSBC loan is underwritten by Murray, who is believed to be keen to retain his current 10 per cent stake even after a takeover.

But it’s not difficult to imagine that Lombard may look to take the opportunity to get their £4m out rather than risk having to recover it from a possible administrator later on, for example if the team is relegated.

For a buyer this is a more straightforward consideration. Unlike Murray and the ex-directors, the banks will have to be paid over time in any event and this debt is incurring interest reported to be averaging 4.7%.

Lombard may, of course, equally take the view that the incoming owners represent lower counterparty risk than the current regime, which is clearly short of cash. But their attitude cannot be taken for granted.

It all means that both the banks and the ex-directors can effectively bump up the immediate cost of the transaction at a late stage, if they decide to do so.

Meanwhile, the January transfer window opens tonight. And with every hour that passes after midnight, the chances of Chris Powell being able to reinforce his perilously thin squad in order to secure Championship status reduces.

If the window slams shut before this drawn-out saga gets resolved then the present owners may eventually end up with less than the pound they paid three years ago - and then everyone connected to Charlton will be a loser.