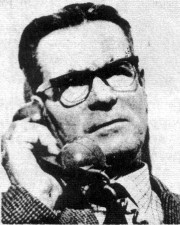 I was there when Charlton won 6-0.

Yes, I was there, the night they beat Swansea City in the Third Division, on August 29th, 1972, two and half weeks after Theo Foley’s side had kicked off the club’s first campaign at that level for 37 years.

There were two goals each for King Arthur Horsfield and big Dave Shipperley, after a very rare opener from Peter Reeves. Paul Davies completed the rout late on.

Three weeks later  Charlton got six again, with Mike Flanagan claiming four in a 6-1 demolition of Notts County. He was even involved in the other goals, scored by Bobby Hunt and Horsfield again.

I was nine years old and never dreamed what I had seen wouldn’t be repeated on at least an occasional basis. Say once or twice a season. But the third tier proved more difficult to escape then this early excitement had suggested. We would stay at that level for three years.

By then Andy Nelson was in charge, but more to the point Derek Hales was in the purplest of patches, during which he scored 13 times and in seven consecutive League matches.

But his two goals that night did not arrived until the Saints were already well and truly sunk, having trailed in at the interval 4-1 down thanks to an early brace from Flanagan and follow-up efforts from Richie Bowman and Colin Powell.

It was one of the most memorable nights of that era and there would be more occasions to savour over the following decades through the long managerial tenures of Lennie Lawrence and Alan Curbishley, as well as under the more mortal men who filled in before and after them.

We had Clive Mendonca, who got a hat-trick in the most important match in the club’s modern history.

We conceded seven at Luton Town, at Brighton & Hove Albion and at Burnley. I saw all 21 goals. But we never scored six and rarely looked like doing so.

Leeds United even scored six against us at The Valley in 2003.

We spent 12 of the 37 years after Southampton in the top division, where victories were usually hard fought, which is some excuse. But not even when we dipped back into the third tier did we really find our scoring boots again.

Scarcely believably, we almost put six past promotion-bound Cardiff City last November, but instead we let them plunder two goals in stoppage time to end up hanging on at 5-4.

By now you had to be in your 40s to honestly say you remembered Charlton scoring six goals and a fair bit older than that to remember Swansea.

And then, at the end of this curiously untidy but increasingly creditable campaign, we go to battling Barnsley and win 6-0. Not even 6-1 or 6-2. Six bloody nil.

It is not only the first six for 37 years, but the club’s record away win ever. Better than the 6-1 at Luton in 1962, before I was even born. Only the third away six in the club’s history, the other being at Gillingham in 1934/35.

And bearing in mind that the Swansea game in 1972 was in the third tier, you have to plough further through the record books to find the Addicks winning by a six-goal margin at Championship level or above.

You have to go back almost 60 years, to September 26th, 1953, when four Stuart Leary goals and a pair from John Evans gave the Addicks a 6-0 First Division win over Liverpool.

Just a fortnight earlier we’d clocked up our record home win, 8-1 over Sunderland, including an Eddie Firmani hat-trick.

If revenge is a dish best served cold then the Tykes can swallow their pride and acknowledge that this is merely long overdue retribution for putting seven past us at Oakwell in September 1958. Kevin Nolan was probably there both times.

More significantly, and for the second time in the space of 12 months, Chris Powell as manager has put his name in the history books.

First a record points tally, now a record away win.

And also it is the first time in Charlton’s 92-year senior history that six different players have scored for the team in the same match.

I am delighted for Chris, not just because of the score but also because it comes on the back of a string of good results.

Never mind the persistent undercurrent of rumour, which I for one believe to be rooted in substance, by finishing a difficult season in such emphatic fashion he has fashioned a situation in which only a fool of the highest order would choose to dispense with his services.

I am thrilled too for the band of Charlton fans who made the trip to Oakwell, for stalwarts Les Turner and Betty Hutchins, and all the many staunch loyalists who got the reward of witnessing an epic result and a game they will surely remember for the rest of their lives.

And after 37 years of waiting I am bloody furious, with no one to blame but myself, that this time I was not there when Charlton won 6-0.﻿﻿