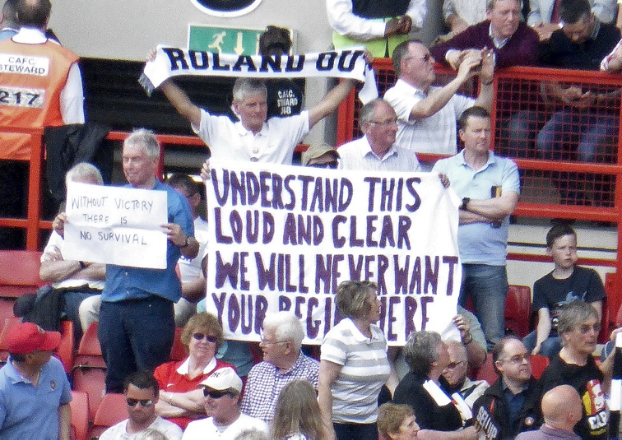 Uncompromising: the message to Duchatelet from fans in the the lower west stand against Burnley

Charlton chief executive Katrien Meire famously told a Belgian interviewer that she doesn’t care about the club’s history. Had she taken more interest, she might have known that as far as the Addicks are concerned Chris Wilder has always been a nearly man.

The full-back had three separate abortive spells with Charlton as a player, injuring an ankle in a pre-season trial outing at Cray Wanderers in 1990, then returning to make a single appearance on loan from Sheffield United later the same year.

In December 1991 he came back again and this time managed two games. But his major contribution in both the latter spells was as an unused substitute.

Now it’s being argued that the 48-year-old may have used Charlton himself, in order to flush out a potential managerial appointment with his home-town Blades.

Certainly, Wilder was always going to be keen on positioning himself for a job at Bramall Lane, but it’s highly unlikely that this was the extent of his attraction to the vacancy at The Valley. After all, he had no need to do anything but sit and wait at Northampton Town to see how things unfolded.

Either way, the Charlton chief executive has been left looking ridiculous, which admittedly is pretty much her default situation at The Valley. Sooner or later the conclusion might dawn on her and owner Roland Duchatelet that this is because she IS ridiculous, at least in her present role.

There is also the question of her part in how this came to be played out in the public domain. She may have been unwise to sanction confirmation, but in practice she had limited influence at the Northampton end and news was already leaking before the weekend.

For those who do have a sense of history, it’s quite neat that Wilder’s name was possibly introduced to the Charlton board by the man who first brought him to London 26 years ago, former manager Lennie Lawrence, whose own reignited involvement with the Addicks stalled after a recent interview for a general manager role. Lawrence has not been at the last two home matches.

However, it is not at all true that the Duchatelet regime’s approach to Wilder was a public relations stunt. The owner flew the former defender to Belgium last week on a private jet and offered him several times his modest salary at newly promoted Northampton, as well as promising him full control of recruitment.

Wilder in turn did proper due diligence on the approach, contacting a variety of people with insight into the situation at The Valley so that he could understand what he would be walking into. Their advice was hardly going to be positive, but he did nothing to abort the process as it gathered steam this week with co-ordinated announcements by the two clubs and further discussions with Meire herself.

The Northampton chairman Kelvin Thomas made clear publicly that he regarded the switch as a done deal. By Tuesday afternoon Charlton had even laid plans for a press conference on Wednesday morning. The respected Times reporter Gary Jacobs was also briefed and duly tweeted that a deal was in place.

By then, however, plans for an announcement had been stalled after it became clear that Wilder was not yet ready to sign on the dotted line. Further talks were scheduled for Wednesday morning, but in the event Wilder simply failed to arrive for them, leaving the hapless Meire floundering.

He seems to have gone from being very enthusiastic about taking the job before the weekend to being privately critical of the Belgians by Tuesday night, a transformation that would hardly be effected on its own by a rival offer from Sheffield United, powerful lure though that would be.

Of course, the Charlton regime now has a considerable vested interest in playing up the latter as the major factor in its latest humiliation. The other version of events is that the contract once produced did not match up to Wilder’s expectations on the crucial aspect of control, which was always likely to be a vexed issue where this ownership is concerned. Opponents of the regime like me have an equal and opposite motivation in arguing that case. However, the two explanations are not mutually inconsistent.

The second scenario is not just a matter of Duchatelet’s known appetite for interference, but also a question of what role would be left for Meire, who already delegates much of the running of the administrative side of the club. Is she really part of a credible reporting line for an experienced English manager? Few in the game would think so.

But while message boards and bookmakers have turned their attention back to Nebojša Vignjević, the man Duchatelet was within minutes of installing in January before an unprecedented internal revolt, that is probably to misunderstand the dynamic that led to Wilder being approached.

The Belgian is believed to be closer to selling the club than his acolytes want to admit, but it seems he has been persuaded by them to try a more conventional route to promotion in order to try to maximise its value before he does so.

This also serves the useful purpose for Meire and chairman Richard Murray of allowing them to continue in place, although the plan could change abruptly if the team starts the new season badly.

Nothing can be ruled out where Duchatelet is concerned, including the ultimate installation of recently minted first-team coach Simon Clark, although the 49-year-old’s CV is well short of the level of experience that would make him any more than a cheap and hopeful punt, however well liked he may be internally.

More substantial candidates are 51-year-old Steve Cotterill, who led Bristol City to promotion in 2014/15 but was sacked in January as the Robins flirted with relegation.

The ex-Burnley boss had previously struggled to find a long-term berth since leaving Turf Moor in 2007, with a long spell out of the English game followed by short stints at Notts County, Portsmouth and Nottingham Forest.

A more controversial candidate would be the former Crystal Palace player and manager Dougie Freedman, who is now closely linked with Lawrence after the pair worked together at Selhurst Park and subsequently at Bolton Wanderers and Nottingham Forest.

A drop into League One would mark something of a comedown for Freedman, but his star is waning after failing to make a conclusive impact in his last two jobs. It might also be a financial stretch for Duchatelet, but the Belgians are likely to be unmoved by the Palace connection. Neither has it ever stopped Murray in the past, although neither of his personal Palace-connected choices - Iain Dowie and Alan Pardew - had happy outcomes for Charlton fans.

Cotterill and Freedman would also be unimpressed by the idea of Meire retaining any decisive involvement in recruitment, but as neither currently has a job it’s conceivable they may take a more flexible view than a manager in post with other potential options. Nigel Adkins now becomes available too, by virtue of his dismissal at Bramall Lane.

Whether any of them are flexible enough to last more than a few months under Meire and Duchatelet is another matter.