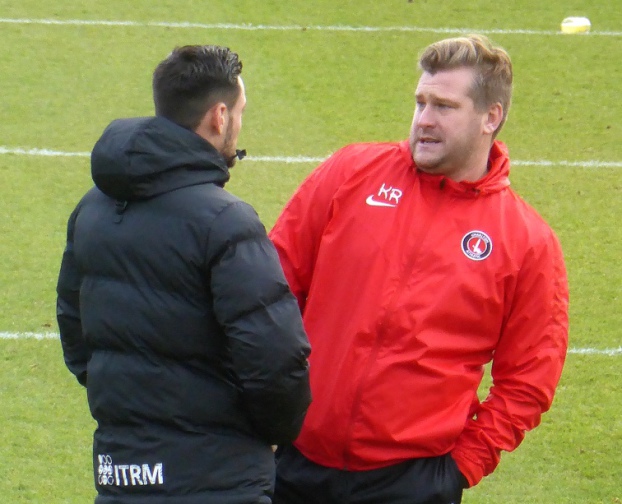 Ricky Holmes grabbed a hat-trick and ended up on the losing side at Shrewsbury Town on Tuesday night, but Katrien Meire cannot be far away from her own - made up entirely of own goals, writes Rick Everitt.

The 32-year-old chief executive scored a quick double back in October. Then she promised talkSport listeners that Russell Slade was “the way forward for us now. I am confident we have the right people in place now,” a fortnight before the latest manager was sacked.
The same month she promised a room full of Bromley Addicks members that Ademola Lookman would not be sold in the January transfer window, which he inevitably was.

And last weekend, she used a similar forum to claim that the club would stick with Slade’s replacement Karl Robinson this summer no matter what. That’s a pledge which may now be hard to deliver – and possibly a mistake of calamitous proportions if it is. It’s also another decision to which, realistically, she is unlikely to have a significant input.

Charlton have since added two more defeats by lowly opposition to complete their February failure and have now taken just three points from seven matches. It is not just that they have lost four of their last five games, but that among the winners have been Oldham Athletic, Bury and now Shrewsbury.

Robinson’s rotating team selection has looked more and more like clutching at straws.

He increasingly looks and sounds like a man out of his depth, lashing out at unnamed players after the latest 4-3 setback in Shropshire and talking to the media of a mysterious pre-match incident that he cannot disclose.

“I feel gutted for Ricky Holmes in there,” he told the South London Press. “Lee Novak put a right shift in and the captain showed it too. We’ve not won enough games on the pitch. It can’t be six or seven managers, it can’t be the lack of funds that have gone in. At some points players have to stand up and be counted.

He then went on to say, on camera, that he couldn’t wait for some players to be gone.

The Addicks have never had to engage in a relegation scrap to avoid relegation to the fourth tier of English football since it was created 60 years ago. Indeed, this is only their eighth season at the third level since the 1930s, and their lowest finish in that time is 14th.

But they currently sit 15th, just six points off the bottom four. And the March fixtures look a lot more testing than the examination they faced in February, with second-placed Scunthorpe United and fifth-placed Bradford City due in SE7, as well as a scheduled trip to runaway leaders Sheffield United.

Suddenly the visit of 21st-placed Swindon Town on the final day – and Gillingham, in 19th, on Easter Monday - are potentially freighted with unlikely significance. It is a remarkable turnaround for a club that at the end of January was still looking hopefully upwards towards the play-off spots.

According to Robinson – and, to be fair,  his skipper-cum-coach Johnnie Jackson – certain players are to blame. However, the manager has appeared to contradict himself and made arguments that are difficult to comprehend when measured against the facts.

The point of replacing Slade in November – albeit that it looked a premature and hasty decision, especially against the club’s urgent need for stability – was presumably to give his successor ample time to prepare for the January window.

Robinson came out of it blaming other clubs for not playing fairly over deals that didn’t happen, yet it was difficult to see what obligation they had to Charlton. It looked like a smokescreen to avoid criticising the owner, who had banked a net £8m in profit with the promise of more to come from Lookman. But the manager had still brought in five new players and continued to talk of the play-offs.

With that hope dashed, he stated in Friday’s Evening Standard: “It has been hard for some of these players. It has been a real difficult time for the club and when players have been immersed in it for so long it can create a bad culture.”

Yet after Saturday’s home defeat by Bury he said: “I don’t think today was a question of mentality. They gave everything they had . . . nobody could walk away and say no one tried.”

In practice the XI he had put out in last Tuesday’s defeat by Oxford United contained only three players who had been part of the first team before August, as did the side that lost to Bury on Saturday. The one beaten at Shrewsbury had just two.

The common factor is Jorge Teixeira, who himself has only been at Charlton since January 2016, but never featured in League One under Slade at all. Ditto substitute Tony Watt, who first arrived in January 2015, but has been little seen at The Valley in the last 18 months.

Otherwise, we are talking about Chris Solly, Jackson and Patrick Bauer, none of whom played in all three of the recent defeats. Against Oxford United, a week ago, and against Bury, Robinson started four players he had himself signed in January.

Overall, these are simply not the same men who lost previous managers their jobs.
Indeed, the turnover of players under Roland Duchatelet’s ownership and his seven different managers has been unprecedented. If each new set of players is so easily sucked into this “bad culture” it is surely reasonable to ask where it starts.

It wouldn’t be good enough to blame the fans, because there have been no protests at matches since Robinson took over. There were few under Slade. Indeed, there has been a determined effort by most of those still attending to get behind the team.

It’s what some people argue being a supporter should be exclusively about. Suck it up and cheer anyway. Regardless of the validity of that, it is an empty mantra if the players don’t believe in the club and cannot wait to be elsewhere. There is nothing left to “get behind”.

How far the current alienation is specific to Robinson is also key to whether he should be allowed to continue, as is whether there is any realistic chance of the owner appointing a short-term replacement who is better than him.

Few believe Robinson’s claim that ex-Sint-Truiden boss Chris O’Loughlin was his own choice as a member of his coaching staff. Many see the Irishman as his most likely successor, especially on an interim basis, but that would alienate a large section of fans at minimum.

It is not Robinson’s fault that the squad remains weighed down by expensive contracts handed to players who either don’t want to be at the club or, in several cases, currently are not. It may well be Meire's. But he does have to shoulder the blame for failing to get the best from what he has. The fact is that his record is worse than Slade’s and certainly worse than November caretaker Kevin Nugent.

But every single manager or chief coach over the last three years has been compromised by the owner. Robinson was never going to be an exception. He has only himself to blame for not realising that, if he did not.

Somehow the Addicks need to scrape a probable eight or nine points from their remaining 12 matches. It’s not a high hurdle, but right now there can be little confidence in Robinson doing that. If the run of defeats is not arrested in the next ten days, he will surely have to go. But It would just about sum up Duchatelet and Meire’s hopeless stewardship of Charlton if they now clung on in the storm and sank the ship completely.

Over the last three years they have got just about every important decision they have taken wilfully wrong. This time, however, the damage it could do Charlton Athletic is almost incomprehensible. There will surely be nobody left to believe that “lessons have been learned” in League Two.

Get over the line, whatever it takes. With Robinson or without him. And then get out of our club, while there is still one for us to support.