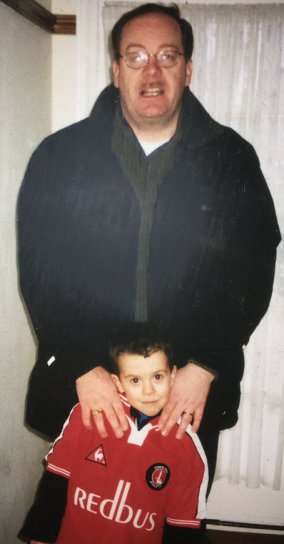 Norris and son (courtesy of David Norris via Twitter)

Former Charlton director Craig Norris has died at the age of 57, his son David announced on Monday (January 8th). Craig had been diagnosed with an aggressive form of cancer in late October and he had been in hospital for the last month.

A 1990 Valley Party local election candidate in Vanbrugh ward, he subsequently joined the Charlton Athletic Supporters’ Club committee and then became the second person elected by fans to the club’s board under the auspices of the Valley Investment Plan (VIP) when he succeeded Steve Clarke in July1995, by which time he was also chair of CASC. He served a two-year term as a director.

Although he had been a fan since the mid-1970s, Norris will be remembered at Charlton particularly for his contribution to drawing up the VIP alongside the club’s directors and as co-author of CASC's Target 10,000 proposal to rebuild support in 1994. He later sat on the Target 40,000 committee from 2004-2012 and was well liked and respected, both by his fellow activists and members of the board.

An ex-pupil at Chislehurst and Sidcup Grammar School and an Oxford graduate, Norris was also a career civil servant who spent his entire working life in the former Inland Revenue, becoming a senior tax inspector. He had retired and later moved to Hampshire from New Eltham with his wife Sheila and their two children in 2016.

In recent years, he had been a vocal critic of the Jimenez/Slater and Duchatelet regimes at The Valley, joining CARD protests including the joint march at Coventry City last April and writing on the subject of Duchaletet for Voice of The Valley earlier this season.

However, his most fondly recalled contribution to VOTV is likely to remain his 1996 A-Z of Millwall (below), published anonymously because he was a member of the Charlton board at the time. The fact that it is missing the letter N only added to the amusement - although the original production error was all mine.

First and foremost, however, Craig will be remembered as a devoted husband and father, and a good mate to many of us. Those who knew him well will all miss him terribly.

A more extensive tribute to Craig will appear in VOTV141, due out on February 3rd.