Buy issues published during the 2019/20 season

April Voice reports the fallout from the ESI war 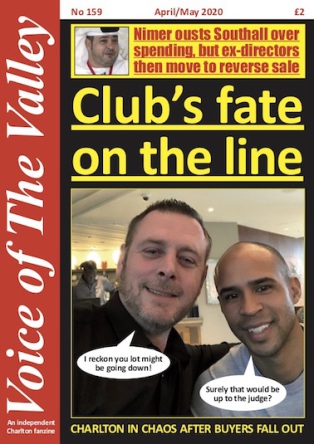 The final scheduled Voice of The Valley of the 2019/20 season has a dozen or more pages of detailed coverage of the ownership shambles at Charlton. VOTV159 includes contributions from Paul Breen, Wyn Grant, John Ingram, Kevin Nolan and Matt Wright, with reflections on the tragic loss of fan Seb Lewis to Covid-19, as well as the wider implications of the health emergency for Charlton and the game.

Rick Everitt analyses the club's recently published 2018/19 accounts and finally puts an end to a mystery that has baffled Charlton fans for more than 50 years. The issue also pays tribute to the club and community trust's former benefactor Sir Maurice Hatter, who has died at the age of 90.

Breen imagines how the QPR home game played out in a world without the crisis while Grant looks at the abandoned 1939/40 season. Nolan has his say on the club in crisis and also chips in to Wright's entertaining anecdotes about the difficulty staff sometimes have interviewing player, while Ingram pays his personal tribute to the late Les Turner. 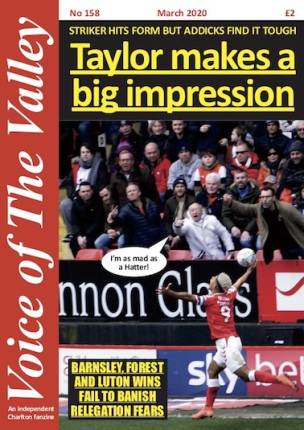 VOTV158 looks at the fallout from the January transfer window, which saw Charlton sign three loan players on deadline day, as well as the team's mixed fortunes in February. It also pays extensive tribute to well-known home and away supporter Les Turner, who has sadly passed away at the age of 73 after following the Addicks for more than 70 years.

Matt Wright focuses on goalkeeper Dillon Phillips, one of the Addicks' success stories this season, as well as revealing something of what used to go on behind the scenes at Sparrows Lane on Friday evenings. Mike Head remembers football's post-war heroes, Wyn Grant reports on a new book about football finance, and Brian and Martin Cowan pay tribute to their father Tony's life as a Charlton fan. Plus we look at the fallout from the Kiko Casilla disciplinary, the future of Football for a Fiver and, last but never least, regular columnist John Ingram reveals a sorry indiscretion in his long career following the Addicks. 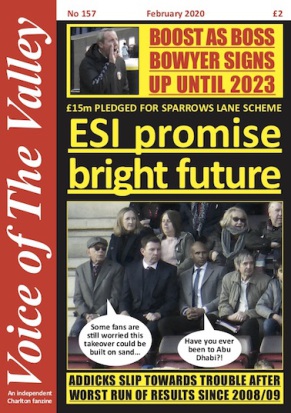 Voice of The Valley returned to Floyd Road with its sixth issue of the 2019/20 season on February 1st and as you'd expect the focus continues on the purchase of the club by East Street Investments, which was confirmed in January.

Matt Wright has some good advice for both the new owners and Charlton fans on how to make the best of the new set-up.

There's far more to VOTV157 than takeover talk, however, and we've got extensive coverage of the recent action on the pitch, as well as a special look back at the best of the 2010s as far as Charlton were concerned.

The long-awaited takeover has finally happened 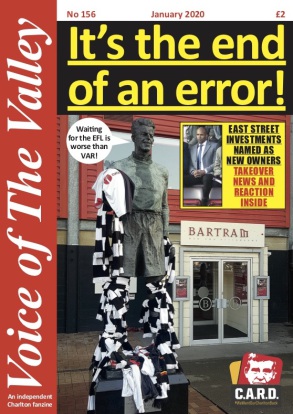 Voice of The Valley's Christmas and New Year issue is a very special one his year - stuffed with news and views about the pending ESI takeover of the club.

We've got ten pages of the story that everyone wants to know about, plus regular contributor Brian Cowan reveals how he became one of the few Charlton fans to meet owner Roland Duchatelet.

That's on top of all the usual VOTV features - including Matt Wright on Macauley Bonne, John Ingram on Christmas in Stoke-on-Trent, Mike Head on the new Valley Heroes book. Wyn Grant on his earliest Charlton memories, Simon Matthews on the cups the Addicks missed out on and much more.

Another trip to Millwall, another defeat… 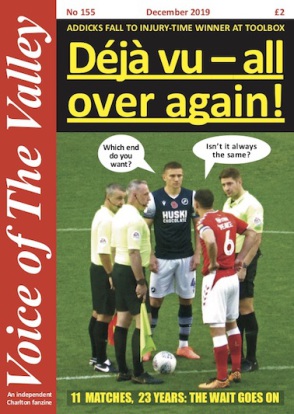 The weather's turned chilly and so, possibly, have Charlton's prospects following recent defeats. But the December Voice of The Valley is here to brighten your nights and warm your hearts.

In the fourth issue of the season we look at Charlton's games prior to the international break and Matt Wright examines the often controversial progress of defender Naby Sarr.

Mike Head returns with a focus on Charlton captains down the years and Dave Hammond, Martin Cowan, Tom Perfect and John Ingram are all on the contributors list too.

VOTV calls for Lee Bowyer to be given new deal 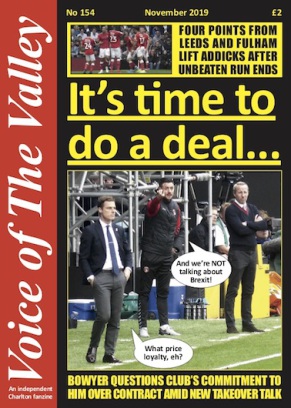 VOTV154 calls for Charlton manager Lee Bowyer to be given a new, extended contract as it relives another eventful month of the Addicks' return to Championship action.

The November issue marks the 50th since VOTV returned to print in 2013 and includes contributions from veteran Charlton reporter Kevin Nolan, as well as Matt Wright, Wyn Grant, Paul Breen and John Ingram.

Nolan shares his trepidation about the modern fashion for "building from the back", while Grant remembers forward Dennis Edwards, who died recently.

Ingram turns his attention to Charlton's bogey grounds - on which subject Rick Everitt reads the runes for the Addicks' upcoming trip to Millwall and wonders if 1996 goalscorer Bowyer could prove a lucky charm. He also takes a look at the new autobiography from Steve Stacey, who in 1970 became the first black player to appear for Charlton. Wright turns the spotlight on the current employment of three former Charlton managers - Chris Powell, Steve Gritt and Lennie Lawrence - and well as ex-defender Grant Basey's rise in the ranks to the role of first-team development coach. 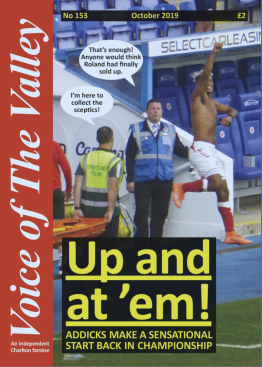 It was an exhilarating start to the new season for Charlton and in VOTV153 we're determined to savour every last drop of enjoyment from it.We reflect in detail on the Addicks' unbeaten run, with a special focus on five-goal Lyle Taylor, courtesy of Matt Wright.

Rick Everitt assesses the late signings and zeroes in on all the August action, while Simon Matthews provides his annual round-up of where former Addicks are plying their trade now.

David Gadbury asks what the club's latest recruitment policy means for Charlton's academy and whether an apparent lack of first-team opportunity will become an issue. Wright also looks at the influence of the gambling industry in football, following BETDAQ's donation of Charlton's shirt sponsorship.

Mike Head remembers Paul Miller's significant spell in a Charlton shirt in the late 1980s, while Brian Cowan refreshes his memory of the 1988 Battle of the Bridge, in which Miller played a vital role. John Ingram looks back to 1965/66, when Charlton were represented by no fewer than six different goalkeepers, most notably Charlie Wright, who by coincidence returned to The Valley at the Birmingham City match in September. Addicks fan Simon Crook, meanwhile, has extended his Scottish football adventure with relegated Berwick Rangers into the Lowland League. 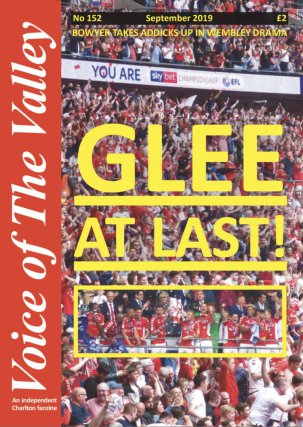 Read enough about the Addicks' promotion at Wembley? Bored already by the win at Blackburn? No, we thought not.

VOTV152 looks back extensively at Charltin's big day out in May – and ahead to the new season, with detailed analysis of the permanent signings, the squad and the summer departures, while Matt Wright looks at Lee Bowyer's handling of it all amd Wyn Grant examines Championship finances.

Tasha Everitt discussses the importance of getting to Wembley for the rising generation, while Brian Cowan reports on Sunderland's terrible recent record there. John Ingram writes about the Charlton play-offs that never were and Kevin Nolan remembers the late Betty Hutchins. We also look in detail at the stalled takeover and owner Roland Duchatelet's string of bizarre media appearances over the summer.