Hasty exit for Sandgaard as new faces move in 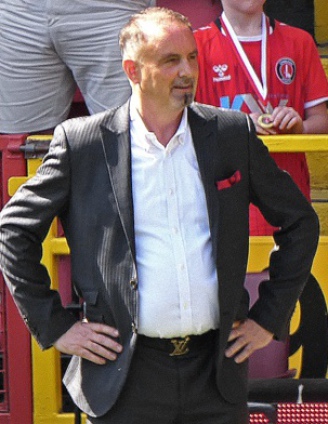 Now you see him: Sandgaard at The Valley back in August

It wasn’t the new faces in the directors’ box that gave the game away at The Valley on Wednesday night. Incoming manager Dean Holden, technical director Andy Scott and chief operating officer Jim Rodwell will have been as surprised as anyone by Charlton’s remarkable removal of Brighton & Hove Albion from the Carabao Cup.

It was the first time the Addicks had beaten Premier League opposition since a Darren Bent penalty saw off the challenge of Wigan Athletic on last day of March 2007, and a thoroughly unexpected boost for fans who had recently endured a sequence of seven matches without a win and the sacking of latest manager Ben Garner. They certainly deserved the moment and it was fine achievement too for the caretaker team of Anthony Hayes and Jason Pearce on the touchline.

More significant for the future, perhaps, was the absence of owner Thomas Sandgaard, who had flown into London on Monday, spoken to staff on Tuesday, then scuttled back to Colorado ahead of what turned out to be one of the highlights of his two-year ownership.

Possibly Sandgaard was anxious to complete his Christmas shopping back home. Maybe he was just scared to face disgruntled fans. But it was a remarkably sharp about-turn from a man who had previously put himself front and centre at every opportunity. So too was the announcement of four new club appointments the previous day – an owner previously deaf to external advice suddenly all ears.

Former Sunderland executive Charlie Methven, who has recently attended more Valley matches than some season-ticket holders, gave one account of this damascene conversion to the South London Press’s Richard Cawley.

“I know Thomas Sandgaard a bit ‐ I met him when Sunderland played Charlton a couple of years back and he had just taken over ownership,” he said. “A few weeks ago we caught up for the first time in a while, and I advised him to hire some experienced senior execs to run the club. I don’t think that was especially revolutionary advice, but he took it and I recommended a few candidates I had come across during my time in football.”

That would be bizarre enough, but it also conflicts with Sandgaard’s recent focus on breaking even and a corresponding series of cutbacks he has instituted across the club this season, coupled with well-sourced rumours of significant overdue bills.

The implausibility of this being simply a change of policy was underlined by the immediate exposure of a new shell company, SE7 Partners, registered at Companies House last Friday, with Methven and new finance director Ed Warrick as directors, and then my own revelation – subsequently confirmed by Cawley – that Scott’s deal is initially for just six weeks, to the end of the January transfer window.

Methven is a former Daily Telegraph and Evening Standard journalist who was involved in an attempted purchase of Oxford United, the club he supports, in 2014. He brokered the 2018 takeover of then League One Sunderland by Juan Sartori and Steward Donald, taking a 6% share and joining the board. He has been widely ridiculed for his subsequent appearance in the Netflix documentary Sunderland Til I Die.

While Warrick was described by Sandgaard in a club statement as a straight replacement for departing finance director Emma Parker, he is not an accountant and his expertise is in property. A Peterborough United fan, he was involved in the club’s repurchase of their London Road ground – minus its car park - from the local authority in 2021.

According to Methven, Warrick was previously a consultant alongside him at Tottenham Hotspur, a club whose new stadium also involved land deals. Methven claims SE7 Partners is simply a vehicle to be used should he and Warrick decide to invest, but neither is likely to have the funds or motive to bankroll the club in the medium term.

According to the Newcastle Chronicle, former Sunderland majority shareholder Donald said on Rodwell’s departure in February 2021: “Jim's tireless work and calm professionalism in dealing with numerous bidding entities over the course of the last year or so has helped us achieve a very difficult task. Selling a football club is never straightforward, but to do so in the current environment has been especially challenging. I want to place on record my warm thanks for completing the task that he embarked upon back in the spring."

Overall, the evidence that the Methven, Donald and Warrick are in the takeover business is compelling, whatever public or private statements have been made to the contrary. Whether they actually have someone lined up to buy the club is much less clear.

Mansour publicly stated his interest in acquiring an English club last weekend in the Daily Telegraph and Voice of The Valley is aware of previous contact about investment between the ethically robust Right to Dream and Sandgaard. However, these discussions did not go anywhere. They do not seem to have been revived.

For Charlton there is now a very clear timescale, dictated by the January transfer window. The two football appointments appear credible, albeit Holden’s only substantial management experience is 41 games in charge at Championship Bristol City 18 months ago. Scott has held senior recruitment roles at Brentford, Watford, Swansea City and Nottingham Forest since 2015 and has said that there will be investment in the squad in January, but ultimately both men will be reliant on the funds actually appearing.

A further complication is that 76-year-old landlord and former owner Roland Duchatelet, known to have previously agreed a £50m price for purchase of The Valley and the Sparrows Lane training ground with Sandgaard, may well be unwilling to assign the lease to any third party without the wherewithal to complete the property deal.

While his son Roderick is now the key contact, the Belgians have been burned by their involvement with first the fantasists of East Street Investments in 2019/20 and now their successor Sandgaard’s weakening enthusiasm for the project.

Seven ex-directors owed a total of £7m by the football club - but whose loans remain secured over the freehold assets retained by Duchatelet - also have a potential say.

Warrick's expertise may also be directed at investigating the potential to sell off parts of either site in order to facilitate any deal, rather than a straightforward acquisition. In any event, it’s unlikely any of Methven, Rodwell or Warrick are involved for altruistic reasons.

Meanwhile, various interested parties maintain a watching brief. American and Canadian money men were given a tour of The Valley a fortnight ago, and US-based Carlisle Capital broke cover in Friday’s Sun. The story asserted an alleged valuation of £20m for a deal, for which it is difficult to see any basis without The Valley.

This company was previously linked to Derby County but reportedly withdrew because of complications over stadium ownership. They are unlikely to find that any simpler in SE7.

Ex-Charlton chief executive Peter Varney could hardly have had a better outcome to his much discussed Twitter appeal for fans to provide a positive environment at the Brighton game. He was certainly looking to impress potential new owners and has always been adamant that a deal must include The Valley. But his hands are now likely to be tied until the Methven intervention plays out over the next few weeks.

The club is likely to collect a substantial windfall, running into several hundred thousands pounds, from Thursday’s Carabao Cup fifth round draw away to Manchester United. The competition is the poor relation of the domestic scene, with no prize money until the final, but Charlton’s 45% share of Old Trafford gate receipts after VAT and costs is a serendipitous bonus, even though the game will not be shown live by Sky.

The squad is clearly in desperate need of strengthening and, already 18th in League One, will do well to collect many points from a holiday programme of a home game against Peterborough United on Boxing Day, and following trips to Oxford United and Portsmouth, ramping up the pressure.

For the fourth time in a dozen years, Charlton go into the festive period with a live takeover drama playing out in the background. Only in 2010/11 did that lead to early success, with the club storming to the League One title the following season and a ninth-place finish in the Championship a year later.

That was the one overseen by Varney and one reason, alongside his eight and a half years as chief executive, why supporters continue to put their faith in the lifelong Charlton fan to come to the rescue. But it remains to be seen whether he will get the chance this time.