And this time the revolution WILL be televised 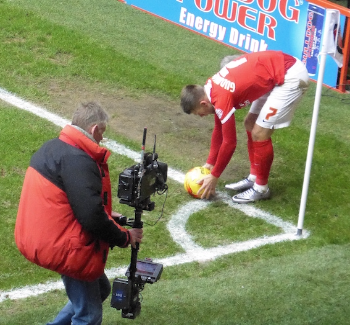 Exactly two years ago, new Charlton owner Roland Duchâtelet sacked Chris Powell, two days after the club had been knocked out of the FA Cup at the quarter-final stage by League One Sheffield United.

As a consequence of their absence from Championship action the same weekend, and previously, the depleted Addicks had been dumped at the bottom of the table for the first time that season. By the time they faced Huddersfield Town in their next match, they had up to five games in hand on their rivals.

Nevertheless, the decision to sack Powell has been hailed by some as vital to the team staying up that year under his replacement José Riga, albeit the Belgian may be giving them fresh pause for thought with his interesting tactical and team selection ploys following his return this January.

For others of us, Powell’s sacking sounded like a declaration of war, not just on a much-loved Charlton personality but on the very identity of the club. Suffice to say that 24 months later that judgement appears to have been vindicated, even if we have not always been entirely sure what Duchâtelet wants to put in its place.

It’s now as certain as Sam Bartram’s place once was on the teamsheet that Charlton’s survival in 2014 will not be replicated this season. The Addicks are going down and they are doing so in dispiriting fashion, having failed to win at The Valley in their last ten attempts.

The last glimmer of hope surely disappeared when they failed to defeat fourth-bottom MK Dons on Tuesday night and reduce their seven-point advantage, delaying the introduction of the player most likely to accompany that mission, 18-year-old Ademola Lookman, until the 82nd minute.

The latter was either a huge and inexplicable misjudgement from the urbane Riga or it was yet more evidence of the confused priorities and inappropriate chain of command operating within the club. You decide.

Then again you can’t expect too much of the Charlton players when they have had nine different voices giving them instructions over the course of the campaign, between the three head coaches and their six assorted assistants, interim or otherwise.

Indeed, it is notable that latest departure José Jeunechamps, who lasted all of five weeks in post, was not interim, whereas first-team coach Wim De Corte remains so, despite having been at Charlton for nearly five months. But language is often a problem back in Duchâtelet’s Belgium.

Powell’s dismissal - like the sale of Yann Kermorgant six weeks earlier - remains an open wound for many, and one that is unlikely to be healed on Sunday, when he returns as a pundit for Sky Sports to comment on Charlton’s televised match with Middlesbrough.

Boro are of obvious interest to the broadcaster because they are pushing for promotion, Charlton not so much. Yet the fact that this fixture was chosen with 17 days’ notice suggests that Sky knew very well what they could expect to find at The Valley, quite apart from any football.

The short notice also meant that the Addicks could have rejected the booking, and they could no doubt have looked to the local police for support on public order grounds. Instead, the lure of a £120k facility fee overwhelmed any misgivings, so now the revolution will indeed be televised.

Suddenly, Middlesbrough’s visit has become the biggest occasion in Charlton’s season and the only question is to what extent the fans will rise to it. In such circumstances, the history lesson is not from two years ago, but more than 30. The more obvious parallel is with the “last” match at The Valley, on September 21st, 1985.

On that day, ironically, the television cameras were limited to overlooking the scene from nearby Valiant House, due to an ongoing rights dispute. But never had the old ground seen a more sullen, bewildered and, ultimately, resigned crowd than for the 2-0 win over Stoke City.

Fans invaded the pitch before the game, as well as the closed East Terrace, and returned in numbers at half-time, only to be persuaded off by a combination of player Steve Gritt and manager Lennie Lawrence, as well as what the Mercury called the crowd’s “legendary sense of fair play”.

They descended in numbers at the final whistle to vent their anger, and I am proud to have been caught on camera in the midst of that, aged 22. It became a defining moment for me, but it was too little too late for the club. More than seven years would pass before Charlton played at The Valley again.

That they did so at all was a huge victory for the fans, but one that should not obscure the fact that in September 1985 we failed to change the course of history. When one group tried to break the north stand crossbar at half-time, those in the stands booed them and chanted “Off! Off! Off!”.

Three decades on, the cameras will be inside and the fans are considerably better organised, thanks in part to the internet. They are also less conflicted. Whereas in 1985 there were some people, especially in the media, ready to speak up for chairman John Fryer, the opposition to Duchâtelet and his chief executive Katrien Meire runs wide and deep. It extends far into the club, as well as right across the spectrum of those who have served it in the last few decades, on and off the field.

There will still be people who oppose all protest or believe that nothing can be achieved by it; even that there is no alternative to Duchâtelet, despite his own advice to the contrary. Others just want to watch whatever is put on front of them regardless of the politics. But there are few left not on the payroll or without another obvious vested interest who are still prepared to make the case for the owner’s judgement or even his good intentions.

The club that we have known is being eviscerated and the short-term prospect is a tumbleweed future of closed stands and echoing shouts from ever-less-proficient players. The little communities of supporters who have occupied seats together for ten and 20 years will be broken up, some never to return.

The idea that this should be allowed to happen unchallenged is as alien to Charlton fans as the suggestion they should counter it with violence or vandalism. Most will want to find an effective middle way. Long-term matters are unlikely to be resolved on Sunday, but the cameras provide an opportunity to publicly humiliate the administration that many will want to take.

The Coalition Against Roland Duchâtelet (CARD) will stage a mock funeral at 2.45pm and has asked fans to line Floyd Road for it, then walk out on 74 minutes. It will also adopt other tactics between those times to make the afternoon an uncomfortable one for the board, but it will not lead or encourage a pitch invasion. Others may take a different view, as they did 30 years ago.

Just as in 1985, the occasion is likely to be memorable for anything but the football, but it may prove to be one of those days that stand out in even a lifetime of support, never mind a two-year interlude in London pretending to be a chief executive.

If so Sky will have played a big part in making it what it is, but for the modern generation of Charlton fans this is no time to be watching events unfold on the television. In years to come they may bore their children with it, but like me of 1985 they are sure to say that “you had to be there”.

CARD is still seeking more volunteers to help out with pre-match activities outside the ground. If you can help, please email charlton.card@yahoo.co.uk.