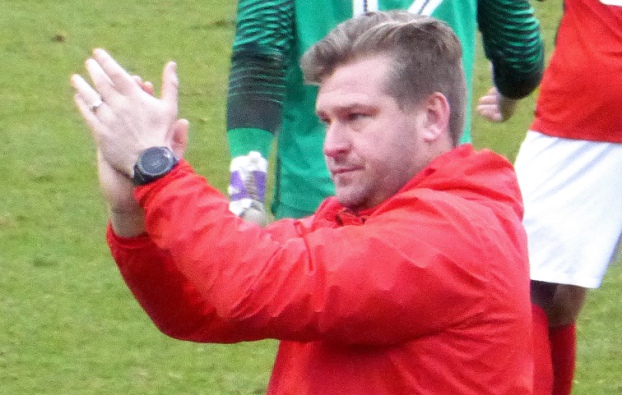 Thanks for coming: Karl Robinson applauds the travelling Charlton fans at Southend on New Year's Eve

Flickers of light behind a flood tide of words

“Today, enough of talking. It is time now to do.”

With these words, 20 years ago, a bright, young leader, entrusted with the hopes of many followers, turned and headed into work.

Latest Addicks boss Karl Robinson is unlikely to disappoint as many people as former prime minister Tony Blair in the much smaller world that is Charlton Athletic, but the disparity is reflected in the level of expectations and the scale of the task at hand. The sentiment remains one that Robinson urgently needs to embrace.

The January transfer window closed with a lengthy and impassioned speech from him about the failings of other unnamed people and other unnamed clubs. Its credibility was swiftly undermined, however, when it emerged that he had made a very similar speech five months earlier at his previous club, MK Dons.

Failings, when acknowledged, have always been other people's in the world of Charlton owner Roland Duchâtelet and chief executive Katrien Meire. Indeed, the club's January transfer dealings did not look dissimilar from previous unsatisfactory openings under Robinson’s predecessors, with three out of five new recruits arriving as loans and the two longer-turn recruits very much from the bargain stall. All that’s really missing is the post-window arrival of the out-of-contract Roger Johnson. And that’s unnecessary this time around, because thanks to Meire he’s still here from last year.

But with Ademola Lookman leaving for a potential £11m fee, of which £8m is reportedly guaranteed, the squad is weaker overall and Duchâtelet is much better off. We can guess which was the Belgian’s priority. He will be happier than Robinson appears to be.

Yet Lookman was always going and no Charlton owner would have been able to resist the deal on offer or sensibly have reinvested all of the fee in chasing promotion from League One. Looked at solely in the context of the sale of Morgan Fox to Sheffield Wednesday and the release of 32-year-old Kevin Foley, the squad looks stronger and certainly better balanced than in December.

Or at least it did until the subsidised deadline day loan of expensive summer signing Nicky Ajose to Swindon Town, yet another name to add to the long, long list of failed recruits under the Belgian owner. So too is that of El-Hadji Ba, ostracised and finally paid off because no one else would take him off Charlton's books. It is difficult to separate the paucity of investment in this window from the many mistakes made in previous ones. Each new era declared by Meire comes with a hefty hangover from the previous ones.

Whether the squad is sufficiently equipped to mount a successful late promotion challenge is another question altogether. It seems unlikely, if only because of the size of the challenge. The recent average points tally of a team finishing in sixth place is 74 and only twice in the last ten seasons has it fallen lower. A realistic requirement is probably 76. Charlton, in 11th, have 39 points, with 19 matches remaining. Having won a third of their matches to date, they now require not just play-off standard performances but title form to make the top six in three months' time. And that's just to reach the knock-out phase.

Recent results, however, give some cause for optimism. Robinson’s ten games in charge fell neatly either side of Christmas. The first five, excepting the goalless draw at Bradford City, were fairly disastrous, albeit two were FA Cup ties against his former club. Defeats at home to Peterborough and then at Millwall left the attack-minded Robinson with just two goals to show from five matches, both of them coming in defeat. It was apparent that he was trying to fit square pegs into round holes to play the way he wanted and that it wasn't working.

Since Boxing Day, however, results have turned, even if the team’s performances have not always given similar encouragement. The 1-0 win at Milton Keynes Dons was secured with Lookman’s parting gesture, although the incisive pass from Andrew Crofts that created the chance was arguably just as significant. Nevertheless it was a poor game between two lacklustre teams, neither of which offered much of a reference for Robinson on the day.

Charlton were then outplayed at Southend United on New Year’s Eve but rallied strongly to claim a point via Crofts’ late equaliser, set up by full league debutant Joe Aribo, a sudden bright light on the Charlton horizon.

Two days later Bristol Rovers crumbled at The Valley, just as they had at the Memorial Stadium in November, this time under pressure from a midfield partnership of Aribo and Ezri Konsa, and the confident finishing of hat-trick man Josh Magennis. But the Irishman was soon injured in the next match against Millwall and, even though they had a valid goal disallowed, the Addicks were hanging on by the end of the second derby clash in a month.

Last Saturday the team confounded most expectations by winning at top-three Bolton Wanderers, despite having new left-back Lewis Page sent off early on and going a goal down from the resulting free-kick. Midfield recruit Jake Forster-Caskey was instrumental in both the visitors' goals, the second completed with aplomb by loaned-in winger Nathan Byrne. That Charlton not only gained the lead but held it throughout the second half was a significant statement of character and resilience.

The manner of this highly creditable victory was not a useful guide to future tactical success, unless Robinson opts to play a man light for the rest of the season, but in terms of confidence on and off the pitch it was an important one. The influence of Forster-Caskey and Byrne on the outcome will hopefully be more telling.

More generally, there comes a point when the detail of each performance becomes less important than the pattern of results. Robinson has taken 11 points from 15, which is impressive – albeit not dissimilar from the sequence Russell Slade and Kevin Nugent secured just before he came. Indeed, it’s possible to argue that the team was already showing signs of getting on track when Robinson arrived and that he - or the owner - derailed it.

Nevertheless, Duchâtelet’s eighth manager is an altogether more animated figure than Slade and is working hard to tell a better story. That elements of it appear to be fiction is not the immediate issue.

It is hard to know what to make of his two 18-year-old loan signings Jay Dasilva and Stephy Mavididi. Neither arrived with a single senior appearance to their names but each have their potential underlined by the fact their respective parent clubs are Chelsea and Arsenal.

As for the return of the ever-enigmatic and reliably unfit Tony Watt, his failure to make an impact at Hearts is not an encouraging augury. We all know the striker can be brilliant on the ball, but the question mark that hangs over him seems on balance less likely to be transformed into an exclamation of delight than a legacy of trailing dots.

With the postponement of Oxford United’s visit to The Valley, Robinson now has six matches in February to rescue the season from abject failure, which is what missing out on the League One play-offs must represent after the heady Belgian rhetoric of last summer.

Four of the games are away, but given that the most difficult of those opponents on paper will be sixth-placed Rochdale – average attendance 3,507 – that’s really no excuse. Are Charlton seriously unable to compete with the Dale or even smaller Fleetwood Town, who come to The Valley for the first time on Saturday in a remarkable fourth place?

Should we not expect to win at bottom six Oldham Athletic and Shrewsbury Town or at home to 21st-placed Bury? Is that what Duchâtelet​ and Meire have done to Charlton - and what does it say of them if it is?

Twelve points is the absolute minimum required from the month. That looks very achievable, even with Magennis currently injured. Even fifteen is not unrealistic. And then it might be time to take what Robinson has to say a bit more seriously.