You really didn't want to do that, Roland! 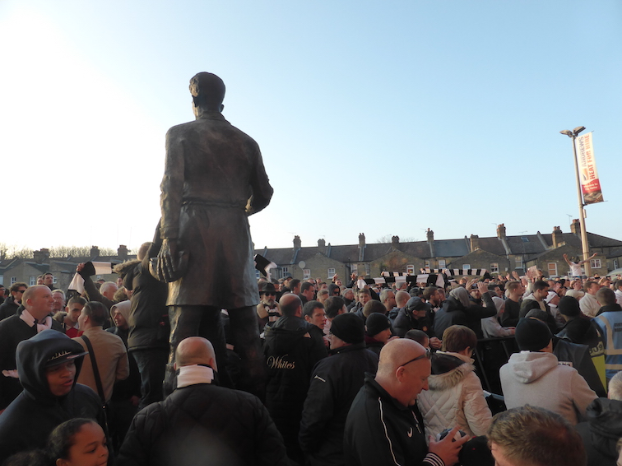 Like a drunk grabbing the wheel of a moving vehicle, Roland Duchâtelet last night steered Charlton Athletic into yet another public relations car crash.

Of course, we don’t know that the club’s Belgian owner had been drinking or even for certain that it was his lunge that made it swerve into oncoming ridicule, but the circumstantial evidence for the latter is substantial.

The unattributed statement appeared mid-evening, while staff were covering the Kent Senior Cup tie at Ebbsfleet United, had clearly been written by someone to whom English is a second language, and was presented with none of the basic presentational finesse of something prepared by staff.

Indeed, Charlton’s communications team did their best to bury it on the front page of the website and failed to alert supporters through social media, as they routinely do for other breaking news, in a clear indication of their lack of enthusiasm for the intervention.

Hilariously, the presentation was so inept that parts of the media interpreted the latest attempt to influence fans’ understanding of what chief executive Katrien Meire said in Dublin more than four months ago as part of the new statement, reigniting that issue again.

So focused on the words she used there have the Belgians become that they fail to grasp that it is the tone and context of her remarks that caused offence as much as the language. Or that she has a string of similar offences, even from the same event, that are being taken into account in the fans’ damning verdict on her.

Just as remarkable was the fact this was the second statement issued by the club in response to Sunday's events in the space of 48 hours and that in both tone and content it contradicted the first one, a clear indication of discord within the club and a lack of respect for the professional judgement of specialist staff.

The echo of Duchâtelet’s much-denied interference in team selection under former manager Chris Powell two years ago is unmistakable. It is a significant proof that the club is owned by a man who imposes his own ideas on employees better qualified to make day-to-day decisions because he can.

Duchâtelet claimed of Sunday’s 2-0 win over Middlesbrough that “some individuals did not come to The Valley to watch the game and support the team, but came to create disorder on the pitch and interfere with the players and the game. Disorder which is, allegedly, needed to drive change in ownership and management”. He added that “some individuals seem to want the club to fail”.

Presumably he didn’t have in mind the individuals - or, more accurately, individual - who employed a Belgian third division coach to oversee an English Championship team for 13 league games in a critical period of the current season.

Or the individual whose response to the club’s dire position at the beginning of January was to sign Rhys Williams, Roger Johnson and Diego Poyet, none of whom have started more than four league matches two and half months later.

After all, if the individual was Duchâtelet himself then he has shown his support for the team by attending precisely zero matches since October 21st, 2014 - not so much the “12th man“ of his statement as the invisible man.

Perhaps he did have in mind the thousand or so Charlton fans who celebrated the second Addicks goal outside the west stand on Sunday, because they had walked out of the stadium on 74 minutes in protest at him. Or the thousands who had followed a coffin down Floyd Road before kick-off.

More likely he is is buying into the convenient and complacent fiction that the vast majority of disaffected fans are simply “sheep” - as the wife of the club secretary memorably described them - being herded into line by a small number of disaffected former employees.

It's an insulting and self-serving reading of the situation that will do nothing to help those running the club come to terms with the fact that the continuation of their regime is now opposed by a clear majority of Charlton supporters, whatever their views on specific demonstrations.

Several sources inside the club have told us that the management team has been locked in denial about the extent of the problems facing Charlton and that there is also considerable scepticism that the owner is given a complete picture of events. Perhaps the television coverage of the Boro game came as a rude awakening for him, in which case he might need to ask some urgent questions of those who represent him at The Valley.

It’s likely that two consecutive escapes from relegation, each of which saw a relatively sharp turnaround in results, persuaded a man evidently convinced of his own genius that it would not be difficult to repeat the trick when he reinstalled José Riga as head coach in January.

Perhaps only now is the stark mathematical reality of the team’s situation dawning on the Duchâtelet. Yet the unexpected victory over Middlesbrough amid the biggest protests yet is wholly inconsistent with any attempt to build a narrative that supporters have been part of the problem.

Meanwhile the substance of his statement is weak. It questions how long a sales process would take, ignoring the very quick timescale in which he himself acquired the club in January 2014.

It asks to whom fans would expect the club to be sold, when everyone now knows of the existence of at least one potential buyer represented by former chief executive Peter Varney and Duchâtelet himself has attested to the interest of others.

Most curious of all, it asserts that “in recent weeks Roland Duchâtelet has met the fans”, for which there appears to be no evidence and no explanation.

Far from weakening the resolve of the Coalition Against Roland Duchâtelet, who organised Sunday's demonstrations, the owner’s outburst will only be seen as by them as proof that he is cracking, and by the wider football community as more evidence that he is unfit to run the club.

As own goals go, this one was a corker.