Nothing to add: Duchatelet's empty words 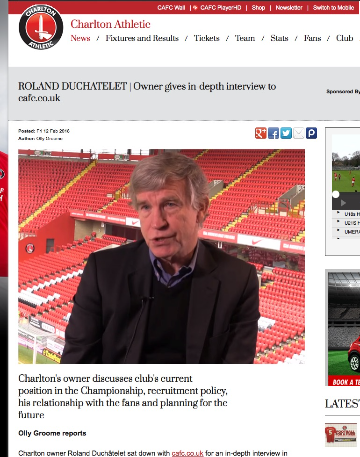 Roland has spoken, but he had nothing to say.

After two years of near silence, a 16-month absence from attending The Valley on a matchday and five head coaches since he last appeared on camera, Charlton Athletic's Belgian owner finally responded to the still-gathering turmoil in SE7 by summoning the South London Press for an interview and separately talking on camera to his own staff this week.

Buried within another series of platitudes about injuries, learning from mistakes and improving communications, the message was complacency and incomprehension - theirs not ours - at the scale of the problems facing the club.

Duchatelet has no credible plan to put things right and every confidence in the people who have already got it irretrievably wrong. His ambition is for everyone to have a nice time at The Valley, itself incompatible with his bizarre misconception that a youth policy amounts to an overarching strategy for running a professional football club.

This is not the machiavellian intrigue of a clever businessman but the proposition of a fool, condemned to be parted from his money until he accepts that whatever particular insight he had brought to the world of micro-electronics will not suffice in a living, breathing football club.

Neither will those of us who have invested a good portion of our lives and a huge amount of our emotions, as well as hard cash, in following its fortunes surrender it to him, however good his intentions.

His words might have been welcome two years ago, now they are simply to be contrasted with his actions. He has not learned from his mistakes. Communications have not improved. The signings are still not good enough. There is the polar opposite of stability. And consequently his failure and the alienation of supporters continues.

Comically, the club published a picture of the SLP's Fulham-supporting deputy sports editor Richard Cawley with Duchatelet to illustrate the owner’s claim that he is listening to fans. But it doesn’t appear from the published interview that even heard many of Cawley’s questions.

As he retreats again to Belgium in the face of the gathering forces of opposition, bottom-of-the-table Charlton’s most obvious problem may be on the pitch, but it is hard to separate even that from the inept stewardship of chief executive Katrien Meire.

Indeed, Duchatelet himself highlights her role in the player recruitment process in the club’s video interview. More generally, he comments to the SLP: “She is a fantastic woman, extremely dedicated. She has done extremely good work so far in all sorts of things. I’m very happy with it.”

In that case, Sir, you are an idiot.

It’s perhaps understandable, even gallant, that he should finally offer a measure of support for his beleaguered appointee, but it is entirely misplaced. Meire may have admirable personal qualities, but she is a laughing stock inside and outside Charlton, including among her peers at other clubs.

It’s not just the never-ending stream of foot-in-mouth public statements, or the boastful quarter-truths about ending free tea and coffee, or the supposed arrangement in which the Valley catering outlets were subcontracted out on trust.

Neither is it only her frankly unbelievable and generally disbelieved inference that former boss Chris Powell - together with multiple others - is lying when he talks publicly about Duchatelet’s attempts to interfere with team selection.

If she was an otherwise competent chief executive she might get away with her often flexible interpretation of the facts, but the evidence that she isn’t continues to mount and is underpinned by wave after wave of criticism from people who have had direct personal dealings with her – or tried to do so, but failed because she did not respond.

There’s her ideas of seeking support in SW London instead of Kent, moving kick-offs away from 3pm on a Saturday, sacking the programme sellers, and more recently scrapping it altogether in its current form, introducing a sofa alongside the corner flag and enabling people to buy cheap tickets for expensive seats.

There’s the attempt to sell Crossbars exclusively as a lounge for supporters in what was historically the cheapest area of the ground, the ill-conceived “sex video", the house music DJ and the shambles over season tickets last summer, the scale of which she still can’t bring herself to acknowledge – and the fatuous attempt to blame Royal Mail for it.

There's the nine-month attempt to wrest control of the player of the year function - an event that should be well below the horizon of a chief executive - from supporters, in defiance of a 40-year tradition and the narrow foot-stamping background to that argument.

Even over the last month, there’s her mishandling of the hopeless Karel Fraeye's future after the Colchester United Cup exit, itself a significant financial blow to the club, and the shambles surrounding the aborted loan signing of Reece Oxford, followed by the balloning of a minor administrative prank into an international news story through clumsy over-reaction.

But the signature event - and the one which laid bare just how useless she is - was the handling of the Peter Varney “investment offer”, not unreasonably delegated to her by Duchatelet, but then the subject of three months’ procrastination.

On this as so much else, Duchatelet has nothing useful to say. He can explain why he passed it to Meire. He offers no explanation whatsoever for the unprofessional and discourteous way she dealt with it or even acknowledgement of how inappropriate this was, given Varney’s history. But perhaps that's because so much of the explanation involves the man the owner calls "the president", Richard Murray.

I’m told that Meire actually plays little role in the day-to-day running of the non-football business, which is certainly supported by her frequently late arrival on matchdays and her multiple preening appearances at often irrelevant conferences as a successful woman in sport.

It may well be an indictment of society that the organisers need to turn to Meire for such events, but it does not follow that she is criticised at Charlton because she is a woman. She is criticised, despite her personal charm, because she is evidently not up to the job she has been given and as part of that has failed to appoint and supervise appropriate underlings either. Together they are running our club into the ground.

If the owner cannot see that then he is no more fit for purpose than she is. Both of them must go, and it is his choice and her misfortune that she must be first in the firing line.