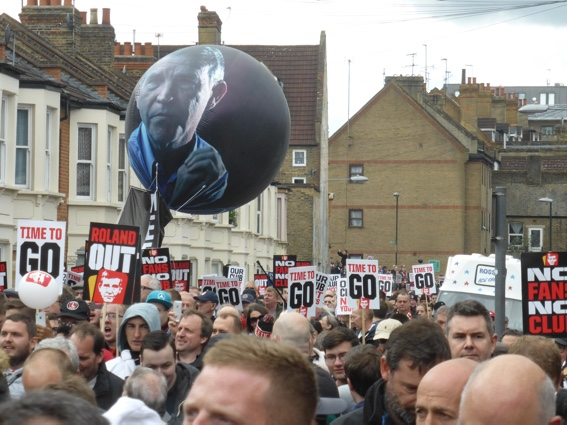 An estimated 5,000 angry fans march in protest before the Charlton v Brighton game in April

A poisonous end to a once resilient community

For the last 22 years I’ve been part of a little community of Charlton fans seated in the east stand. Over time it’s included three generations of my family and another, and two generations of several more. Like any community over more than two decades, we’ve gone through birth, marriage and death. We’ve seen our children grow to become adults and move away. Our numbers have waxed and waned through changing circumstances, but even those who have left come back to visit.

Ironically, this has helped to make The Valley exactly the kind of meeting place for me that the current owner mentioned in one of his first and so far few public statements to supporters. It’s a community, however, that the football club management has succeeded in wiping out completely. Incredibly, this is happening after the Addicks were named "community club of the year" by the know-nothing Football League, albeit off the back of the good work done externally by the Charlton Athletic Community Trust.

Among about 20 current season-ticket holders, most of whom have been there ever since the east stand was built in 1994, none have so far renewed for next season. Many are boycotting on a point of principle, while others are unwilling to sign up because they have simply got no enjoyment from watching the team this season and don’t believe that is about to change.

Yet these are people who sat through Charlton’s previous catastrophic 2008/09 relegation season with fortitude and endured the spell in League One that followed, if not without complaint then at least with resigned good humour. They could accept the mediocrity that was often on offer in front of them because they were devoted to the club and could be confident that whatever its shortcomings those steering its destiny wanted success on the field as eagerly as they did.

Personally, I’ve had a Charlton season ticket continuously since 1975. I bought a ten-year season ticket as part of the VIP scheme in 1992, and when that expired continued to buy season tickets for family members even though I was by then employed by the club. So for me and thousands of others, Saturday’s game against Burnley is the end of an era. And the group that has sat together, laughed together, moaned together, but most of all simply shared the rich experience of following Charlton for all those 22 years, will be broken up. It must be unlikely that it will ever be fully reassembled.

So what, many would say? There’s nothing special about you. But that’s precisely the point. Our experience will be replicated around the ground on Saturday and the owner’s failure to understand that, to value it even while paying lip service to the idea, is the real tragedy of what is happening to the club this weekend. It’s not a relegation but a dissolution.

The declining crowds, official and real, already tell the story. This is how clubs fade away. This is what happened to Charlton from the late 1950s onwards, but that was the product of benign neglect. This is wilful and aggressive, ushered in with a smirk and a shrug by those who never knew what the club was and could be in the first place.

Of course there ought to be a measure of sympathy for some of the players, especially those whose loyalty and length of service commands respect, even more so to much less well rewarded staff who may lose their jobs. But the wanton destruction of these little communities is breaking the bonds that underpin the very identity of the club. There has been nothing like it since the move to Selhurst Park in 1985 and now, like then, it is the product of a huge and grotesque failure of judgement.

It is also acutely dangerous, because relationships between fans are the glue that holds the club together, whether that’s the camaraderie on board Valley Express as it brings exiles back to London SE7 or the banter in the stand exchanged with the Bloke Behind Me, whose name you never quite learned. These bonds take years to establish. Once they are snapped, they will not easily be re-established.

Head coach Jose Riga, it appears, will be another person leaving The Valley after Saturday, despite signing an 18-month contract less than four months ago. The verdict on his second spell in charge is likely to be inconclusive, since in all probability the Addicks’  hopes of Championship survival were mortally wounded before he even arrived.

The problem is less in the loss of Riga, decent man though he appears to be, than in yet another turn of Roland Duchatelet’s merrygoround. Once again any accumulated knowledge is lost to the club. After six changes of head coach in little more than two years, who would confidently predict that the next incumbent will see out the new season? What self-respecting successor would accept promises of independence or autonomy from serial meddler Duchatelet and his puppet regime in the boardroom? Why would the remaining fans feel assured that this time things will be different, when Duchatatelet's only purpose in owning the club appears to be a bizarre form of self-abuse? Why would anyone want to sit and watch that?

I have no doubts that earnest attempts are being made to bring in a British head coach after five failed foreign incumbencies, because what other narrative can the puppets put forward as part of their next pretence? But even if that happens, the huge probability is that the new man will fail too, because he will still be part of a structure governed by people who believe they can defy the market in English football talent and yet are spectacularly ill-equipped by background and experience to do so. They are the mistake, not just their decisions.

No matter what short-term gains are made - as they were, remember, under both Guy Luzon and Bob Peeters - the problem is and will remain Duchatelet, underpinned by the principal apologists Katrien Meire and Richard Murray. They may promise to learn from their mistakes, but experience compels us to believe that the invitation to buy a season ticket is presently just an offer to watch the same miserable scenario play out again and again. That’s why they are opposed, internally and externally, within their own directors’ box, among past and present players, by sponsors, media and even by fans of other football clubs, as well as the great majority of Charlton supporters. The poison cannot be its own antidote.

On Saturday, therefore, the sadness will be mixed with anger, but no little affection for the many vital times we enjoyed together. We’ll pack up our memories of 500 days watching Charlton from the east stand and carry them home with us. We’ll remember Johnnie Robinson’s equaliser against Manchester United, Yann Kermorgant’s sublime chip against Hartlepool, alongside Jon Fortune’s header that relegated Crystal Palace from the Premier League, so many others from Johnnie Jackson, and Chris Powell’s final game goal. There will even be a fond place for Alan Pardew’s 89th-minute winner in the 4-3 thriller against Southend United on the day the stand opened. Some of us will be back, but how many and when, who can say?

The regime will not begin to understand what it is losing on Saturday. Indeed, it may even delude itself that is better off without such diehard supporters. Yet it will not find it easy to replace them. And we can only hope that the damage the club is sustaining will ultimately help to see these useless idiots off, once and for all.