Harsh lessons for the Addicks from a week of chaos 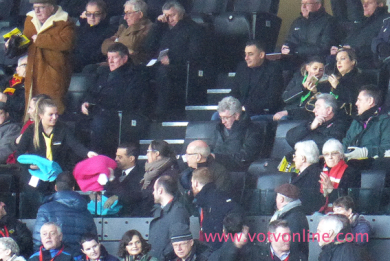 Blanket coverage: Luzon and Meire keep out the chill

18/1/14: One week on from the sacking of Charlton head coach Bob Peeters, what have we learned?

The club’s public handling of the appointment of his replacement was a slow-motion car crash, which has left chief executive Katrien Meire floundering, but the more ominous statement was contained in the team’s 5-0 defeat at Vicarage Road on Saturday.

The scoreline in the club’s heaviest defeat outside the top flight for more than 30 years flattered Charlton, not Watford, as the highlights shown on the BBC’s Football League Show fairly reflected.

There were two teams on the field and it ought to be recognised that the home side played well. But once their first goal went in there was nothing for them to beat. The final result could very easily have been the score at half-time.

New head coach Guy Luzon, watching from the directors’ box because his work permit had not come through, might well have felt that he had dodged a bullet.

Note, then, the post-match statement about the new boss from caretaker Damien Matthew: "He's met the players, he's had some chats and they are well aware of how he wants to play as well, so we tried that in the first-half.”

That is just one remark among several, largely positive quotes about Luzon, and isn’t even in the version on the official website, so any interpretation of it needs to be kept in proportion. But it does counter any suggestion that Luzon’s influence on the squad had not yet been felt.

Clearly, the Charlton players are a group struggling for confidence as well as team spirit, but any idea that removing Peeters and his associates - and the legacy of some allegedly questionable behaviour around the training ground - would be a quick fix can already be dismissed.

The players demonstrated no more appetite to perform in front of their new boss than in front of his predecessor. Neither, incidentally, is there much point attaching any blame to Matthew or goalkeeping coach Ben Roberts.

After the game, Meire got involved in a heated debate on a train packed with Charlton supporters, for which you can either award her credit for engaging with an angry public or marvel at her naivety in putting herself in that situation.

Part of the exchanges were captured on video. Attempting to explain the events of the previous seven days, she told a persistent questioner: “Last week, before the Brighton game, the whole team has been negative. There was no team spirit, so we tried to bump up the team-building and that’s why I brought [put] a positive message in the Valley Review.

“After the game, you see nothing has changed, so I go home and I think, what are we going to do? Sunday we started discussing with the board what are the problems and what we should do. On Sunday we made the decision that we would dismiss Bob.”

Although she struggled to get a word in edgeways, Meire denied having lied and appeared to confirm what may already have been obvious from Alan Curbishley’s comments on Sky, namely that the former Charlton boss had been among those to put himself forward.

This was despite the extreme unlikelihood of him being able to form a working relationship with owner Roland Duchâtelet.

However, Meire seemed to talk herself into trouble, by commenting:  “You cannot expects us to go only with . . . and no other club, er . . .”.

Pushed on why there appeared to have been no proper recruitment process, despite the club having announced it was launching a search to fill the role on Monday afternoon, she added: “You’re talking about football. Things change over overnight or within an hour.

“Have you experience of working with [football] managers? The most important issue is that you have trust and respect initially and we already had someone that we saw . . . but there were other applicants, as you know.”

Unfortunately, Meire is still battling to overcome the report from Israel before the Brighton game that Luzon had been lined up to replace Peeters, to which she herself had referred in her programme article, even though it may conceivably have been placed by Luzon or an associate.

But it would be profoundly insulting to Curbishley, who after all worked hand-in-glove with current chairman Richard Murray for 15 years, to infer that he would not inspire "trust and confidence".

In fact, that would be precisely the effect on supporters, not least because they know he would not tolerate the owner interfering inappropriately in team affairs.

The actual meaning, however, is presumably that he would not inspire “trust and confidence” for Duchâtelet, which as usual trumps everyone and everything, regardless of whether his own solution will deliver the necessary change in the club’s fortunes.

Having presided over an omnishambles, the beleaguered Meire urgently needs and deserves some support from her patron, who must surely make one of his rare appearances in England to demonstrate his backing both for her and for his latest chosen one on the playing side.

Whether that amounts to more than another video of platitudes or an actual appearance in the directors’ box against Rotherham United on January 31st remains to be seen, but there is no reason yet to suppose that Duchâtelet is a coward. However, he does risk looking negligent if he stays away.

I’d also expect to see some significant investment in the playing squad from outside the network, because it must be apparent even to the Belgians that on the current trajectory the club is heading for League One.

More network players are only likely to deepen the alienation felt by significant numbers of supporters, and which contributed to a curiously fatalistic atmosphere at Watford. The owner’s failure to embrace or even apparently understand the culture of the club is a major problem.

Whether new faces will be enough to provide the antidote to what appears to be a poisonous situation within the playing camp remains to be seen. There is also a possibility Duchâtelet will try to balance the books by selling one of the more popular squad members, based on previous experience.

Ironically, the one player showing any positivity yesterday, not only on the pitch but in coming over to sign autographs at half-time and clearly trying to build a rapport with supporters, was latest network signing Tony Watt, from Standard Liège.

That’ s a start, but with another difficult away trip to Wolverhampton Wanderers next up on the itinerary - and always assuming Luzon has got a work permit by then - the road ahead for Charlton, Luzon and Meire currently looks very hazardous.

The window of opportunity for Duchâtelet to take the club forward is still open, but judging by the mood at Vicarage Road yesterday he’d better take advantage of it very soon.