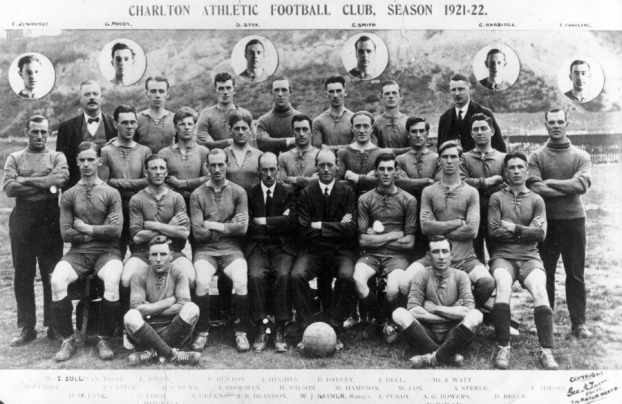 It is now 100 years since Charlton Athletic were admitted to the Third Division (South) of the Football League. There were two available places and Charlton faced competition from what was described as “a fleet of South Wales clubs”.

Charlton’s simultaneous admission to the London Combination might seem to be a sideshow, but in fact it was not, for two reasons. First, it enabled the club to have a competitive reserve side. Walsall, who were admitted at the same time to the Third Division (North), were obliged to compete with the minnows in the Walsall and District League.
Second, the application revealed some of the complicated politics that surrounded Charlton’s Football League application.

There was a widespread suspicion in football circles that Charlton were a nursery club for Tottenham Hotspur. The Athletic News referred to “the suggestion that Charlton Athletic are but protégés of Tottenham Hotspur, and that the London clubs can do without nurseries that are so well known to many of the Midland League organisations”.

There was some substance in this report as Charlton admitted that Spurs had advanced them £500 when they were transitioning from a junior to a senior club. This would be £25,000 at today’s prices and was hardly likely to be just an altruistic gesture from north of the river. Indeed, the Charlton management admitted that they received “kindly and encouraging advice” from Spurs. Charlton had to pledge to repay the sum when they were admitted to the Football League.

The proposed admission of Charlton to the London Combination created a lot of bad feeling and was initially opposed by three clubs: Arsenal, Clapton Orient and Fulham. Arsenal were suspicious of Charlton’s links with their North London rivals. More generally, there was a concern about Charlton being the only professional club in London outside the ten members of the combination. It was feared that if Charlton were admitted other clubs might be encouraged to professionalise, increasing competition for spectators in the capital.

This prospect particularly worried Fulham. The Athletic News explained: “Fulham draw a lot of their support from the south side of the Thames, and bordered as they are on two sides by Chelsea and the Rangers, they do not want a new professional club to come to oppose them on the south. The club they fear is Wimbledon. They are drawing large gates.”

Their chairman said: “I would not object if a club was started in the next piece of ground to ours. It would help us both, for we should both be educating the local public in the benefits of association football. If they got part of our gate one week, we should have a share of theirs the next. When Charlton Athletic played on our ground in a Southern League fixture, the gate was over £500 and there were nearly 600 more spectators present than there were on Easter Monday when our first team met Plymouth Argyle.”

The club did what it could to whip up enthusiasm and at a well-attended meeting in Greenwich, the chairman (Arthur Brandon) said Charlton had made wonderful progress in a few years. They had practically carried everything before them as juniors and attained a lot of success as seniors. The spirit of ambition was always with them, and after one season as professionals they desired to join the Football League.

When completed they would have a ground second to none in the kingdom, but money was needed to carry the scheme to fruition. All their present players had expressed a desire to stay with the club, and other first-class players wanted to wear the Charlton colours. If the local enthusiasts would only rally with financial support the future of the club would be assured. Of course, they did not to the extent needed and the club was beset by financial challenges throughout the following decade in the absence of a wealthy backer.

Rick Everitt notes in Battle for The Valley that the proliferation of Welsh clubs competing for admission helped Charlton. In practice, the standard bearers for Wales were Aberdare Athletic, who were given the wholehearted support of Cardiff City as the senior Welsh club and said they would do anything to help their cause.

Aberdare had won the Welsh League in the preceding season and were the runners-up in the Southern League. Their average attendance was 16,000 and they owned the freehold of their ground. The Athletic News commented: “Everything is first-class and built of material to last. The town of Aberdare is accessible without the least difficulty. The genuine character of Aberdare as a town’s club, the men at the head of it, and their policy, should ensure their election.”

What did Charlton have to offer by comparison? The Athletic News sent “Achates” to find out and he was shown round by the chairman. He reported: “Whenever I have travelled Woolwich way I have been struck by the position of a football ground outside Charlton Station, and had an eager desire to inspect it. This Charlton ground would have delighted the ancients looking for an amphitheatre in which to hold an Olympiad. I realised that Stamford Bridge could be almost lost in it, for the enclosure already fenced in covers over ten acres and extra land is available to make up the round dozen.

“It is situated in a pit, exceptionally well drained I understand, with tremendous cliffs on two sides, and banking possibilities out of the ordinary. It is at present in a more or less rough state, but 50,000 spectators could see a game now, and one scheme has been prepared whereby accommodation, if it were necessary, could be made for nearly 20,000.  Visions of a national ground for the Cup Final, I wonder.

“Charlton Athletic is an ambitious club. This season they became a professional organisation on modest lines. With ‘Wally’ Rayner as manager, with whom I renewed acquaintance, remembering him as a player with Croydon Common, Norwich City etc, attention is being paid to the development of local talent, with a wise leavening of experienced men.

“For the freehold of the large ground they occupy the price is £3,000 [£150,000 today], and at a recent meeting purchase was decided upon. At the same time it was agreed to float a company with a suggested capital of £10,000 [£500,000 today]. To me there appeared every reason why a Third Division club should be successful. 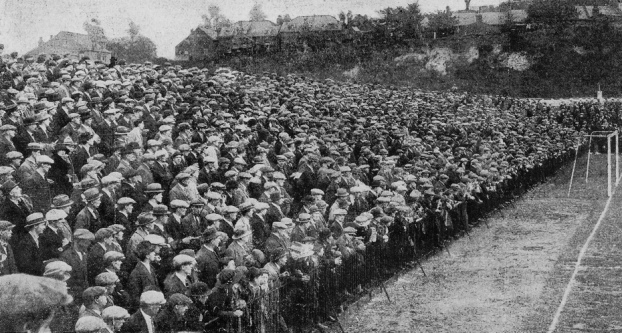 “Next season a long stand will be erected as a first instalment of the improvement scheme, and it is in the centre of a very populous district, exceptionally well served by train, tram and bus, and only a short journey from the City. Woolwich Arsenal used to flourish in the district, and Charlton have paid them the compliment of wearing the same coloured livery.  Charlton should one day be one of the big clubs of London.”

Presenting Charlton’s case to the Football League, director Edwin Radford pointed out that the town adjoined Woolwich, which was the cradle of professional football in the south. The club was established 16 years ago, and had done splendid service in fostering the game. They were the rightful successors to the Arsenal, and they hoped to continue that succession by again taking league football to that part of the metropolis.

There was a population of a million immediately surrounding the ground and the revenue last year, without a stand and with a 9d gate, was £8,000 [£400,000 today]. The accommodation on the ground could be expanded to 100,000, and by the opening of the season they were expecting that they would be able to accommodate 50,000 with great comfort.

They had over 20 professionals and he held in his hand from certain directors and other local gentlemen a financial backing to a very considerable sum – far more than would be necessary to carry out any obligations for next year.

Apart from Aberdare Athletic, which received 38 votes to 30 for Charlton, the fleet of Welsh clubs did not do well. Despite Pontypridd claiming that it was the most accessible spot in South Wales with a population of quarter of a million people within six miles of the ground and similar gate receipts to Charlton, it got just five votes, followed by Abertillery with four and Barry with only one.

The main rivals to Charlton were Bath, but they got just 12 votes. Their case was weakly presented, it being argued ‘”that there were huge possibilities for the association game in Bath”.

In fact, it has remained an area where rugby is the most popular spectator game and Bath have never achieved league status. Aberdare Athletic failed to secure re-election to the Football League in 1927.

In August 1921 the Daily Herald published a number of stories boosting what they described as “London’s baby professional”, although it is questionable whether one about a reporter turning up at the ground and finding players engaged in a makeshift game of cricket did much for the club’s image. On August 9th, a detailed report stated that: “Those who saw the wild, uncultured surroundings of last year at Charlton will be surprised to find a ground this season terraced on three sides, affording a view to 35,000 spectators.”

The grandstand had been held up by a delay in consent being granted by the London County Council but was now being built on the lines of that at Spurs. It was noted that: “The playing pitch, which came in for some criticism last season, has been greatly improved.”

Those parts of the ground not used for football would provide facilities for cricket, bowls and tennis. The ground was only two minutes’ walk from the almost continuous LCC tram services, and not a half-minute elapsed before a bus or tram could be boarded going in either direction.

“The club should meet the desire for good football felt in the Woolwich, Greenwich and Blackheath districts. With the right sort of support from the enthusiasts among the million and half inhabitants of the neighbourhood, Charlton Athletic should prove an undoubted success.”

Unfortunately, although respectable, the crowds did not appear to the extent hoped for. The club was under-capitalised and the flawed move to Catford lay ahead. In many ways getting membership of the Football League was the easiest hurdle the club had to overcome. Without it, however, the club would never have flourished.