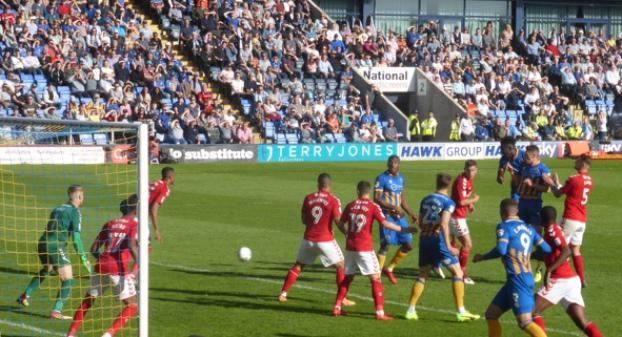 Charlton's last match, at Shrewsbury. The close season is now past the halfway mark with no takeover completed

Is this the week? It’s a question that Charlton supporters have been asking themselves since Christmas when the club finally confirmed that it was “in talks with various interested parties regarding a potential takeover” and owner Roland Duchatelet told talkSPORT’s Jim White in a text that it was “now likely that the club will change ownership”.

More than six weeks after the Addicks’ play-off ambitions were ended by Shrewsbury Town – and under six before the 2018/19 season kicks off at Sunderland – we are still waiting.

The club finally broke an official silence of more than three months last Wednesday when it issued a joint statement with the would-be buyers stating that “Charlton Athletic can confirm that it is expecting a takeover of the club to be completed by a select group of investors linked to The Australian Football Consortium”.

The rest of it was largely waffle which added nothing to the sum of public knowledge, but the fact of the statement was still significant and can be seen as a positive response to rampant internet speculation that the deal had fallen apart following its reference to the EFL at the end of May.

Nevertheless, more is known about what is going on, thanks to information leaking from a whole variety of places, including via several posters on the Charlton Life message board.
Just as Voice of The Valley was able to tell readers that the club was being sold long before the official confirmation in December, despite widespread denials over many months, so we can fill in some of the gaps from our own sources now.

Duchatelet’s unexpected visit to The Valley a fortnight ago resulted in the immediate sale of defender Ezri Konsa and was followed by the departure of teammate Harry Lennon to Southend United at the end of last week. Both clubs were given discounts to pay cash up front, even though in Lennon’s case the difference amounted to as little as £30,000. A similar story also emerged from Blackburn Rovers about their interest in Patrick Bauer, with sources at the Lancashire club claiming they had been quoted £500,000 for cash.

This sharply conflicts with a £2m price tag subsequently reported by the SLP’s Richard Cawley, and which is backed up by the fact that so far Bauer remains a Charlton player. Bauer's contract expires in 2019, so a £2m valuation is unlikely to be met, but the sale of a third central defender in short order would also create a serious problem for the squad and smack of recklessness on Duchatelet's part unless he had already been replaced.

The effort to raise quick cash by selling assets was almost certainly linked to an offer made by Duchatelet to buy out the £7m in former directors’ loans that have been outstanding since 2010. These loans are not repayable until and unless Charlton return to the Premier League and do not pay any interest while the club remains in the EFL.

They are, however, secured by a first charge over the club’s assets, which means that the seven individual holders have the individual ability to prevent the issue of new leases over The Valley and the Sparrows Lane training ground.

Unsurprisingly, this has led to the claim that the effort to redeem the loans – at a reduced rate – has been triggered by plans for Duchatelet to retain ownership of the ground and lease it to the Australians, to offset an apparent shortage of funds to buy it outright.

However, that is not the only reason a buyer would want the liability removed. Indeed, it is surprising that the charges have already survived two changes of ownership. With no remaining bank debt, they now put the ex-directors at the head of the queue of creditors if the club fails financially - in front of Duchatelet who is owed more than £60m via his Staprix company.

Apart from anything else, new owners who are already paying what most believe to be an inflated price for the club are unlikely to see why they should also pick up historic debt, just because previous buyers did and have chosen to leave it on the books ever since.

Voice of The Valley has established that the claim AFC may want to rent the ground originates entirely from the Belgian camp and is explicitly denied by the Australians.

Necessarily, Duchatelet’s overall valuation of around £40m is heavily based on the fixed assets, so it is unclear what sense it would make for anyone to buy the club without securing long-term control of them.

Removing the current charges would potentially allow the Belgian to set up a new one with himself as preferential creditor, and leave some of his Staprix loan in place, but we have been told that the Aussies want clean title.

In any event, at least three former directors remain unwilling to discount their loans. But they represent well under half of the £7m outstanding, and the gap between the offer and what they are owed will necessarily be a fraction of that, so any suggestion that they alone could cause a takeover to fail should be treated with scepticism.

A more important question is whether AFC have the ability to complete the deal, despite the personal wealth of businessman Andrew Muir, upon which much of their public credibility rests, not least because no other major investors have been revealed.

There is some evidence to suggest that at least one investor was forced to drop out as a result of the EFL’s fit and proper person test, which in turn has hindered the group’s ability to meet a previously agreed valuation.

That would certainly explain Duchatelet’s renewed attention to the club, which included identifying further budget cuts and confirming Lee Bowyer’s continuation as caretaker boss. Bowyer’s permanent appointment - and even more so the installation of a new chief executive or finance boss - would be a convincing indicator that the deal is off.

Despite the latest statement’s attempt to claim otherwise, the current non-football management set-up is grossly inadequate, even to run a League One club, and is compounded by a lack of boardroom oversight, with only one other (non-executive) director in place - Richard Murray.

But as the clock ticks down to the new season – and, coincidentally, the end of the club’s financial year next weekend - both sides are also able to use the situation to pressure the other. Duchatelet is still paying the bills; the Aussies know that football preparations for the new season will increasingly be undermined if the stand-off continues.

We understand that Duchatelet has set a deadline of this Friday for the Aussies to prove they have the funds and the second week in July for them to complete the deal.

If they fail then we have been told by a credible independent source that there is a second interested party in the background who could step in, as Duchatelet and Murray have both claimed, but if nothing else last week’s statement confirmed the Aussies remain favourites.

Meanwhile, the hiatus is doing nothing for fans’ confidence in the club’s future - whoever is in control.