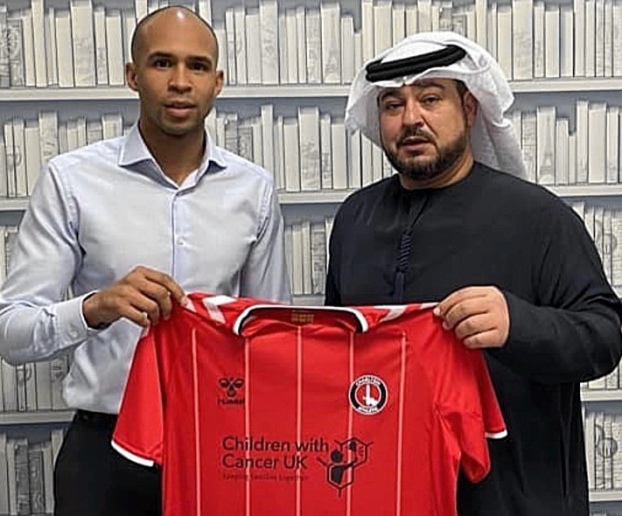 Books at bedtime: neither Matt Southall not Tahnoon Nimer appear likely to put the club back on a stable footing

This is not 1984. Charlton’s precarious current predicament, now the subject of an EFL investigation, has understandably drawn comparison with the club’s traumatic winding-up 36 years ago.

Then, as now, a separation in the ownership of The Valley and the club itself was a key consideration, as were unpaid bills. By the time of the crisis, owner Mark Hulyer lacked credibility to the point where he was never going to emerge from the episode in charge.

I did not go to the High Court, but vividly remember waiting anxiously for news on that long-ago March afternoon and the euphoria when the court’s acceptance of the new company was reported by local radio station LBC (sadly not by match reporter Peter Burrowes).

Both episodes amount to an existential threat to the football club. Yet the landscape in which they take place is very different.

Football was in the doldrums in the mid-1980s. The game had not yet touched the nadir that would be reached after the Bradford fire and the Heysel Stadium tragedy the following year, but the perimeter fences had gone up and stadiums generally were unappealing.

Aggregate attendances across the top four divisions were 18m in 1983/84; last season they were close to 33m. in the second tier, the figures were 6m and 11m. Lennie Lawrence’s Charlton side was doing surprisingly well, but the average at The Valley was 6,732 – despite the mid-season arrival of former European footballer of the year Allan Simonsen.

The club was under financial pressure from a variety of creditors, including Leeds United, who became the first ever to issue a winding-up order against a fellow Football League member, claiming an unpaid transfer fee for Carl Harris.

Their action was swiftly joined by landlord and former Charlton chairman Michael Gliksten and the Inland Revenue. Even so, the sums in play barely totalled £1m. It was small change to the people who paid it and they were never going to turn a profit.

The conventional wisdom was that football would continue to decline and rescuers Sunley didn't even buy the land, despite being a building company and agreeing a price for it.

Nearly four decades later, the club and the game have been transformed. Charlton may have endured a largely miserable decade, including six seasons of third-tier football, but the club’s potential is not in question in the way it was in the 1980s.

Not just its recent attendances show that, but so too do the long sequence of 25,000-plus crowds in the Premier League after the turn of the century.

The stadium now stands comparison with most at the Championship and many in the Premier League, while the rewards attached to Premier League football, particularly the central payments, make a London club with a ground fit for purpose an attractive prospect.

The upper echelons of the game are awash with money. Even insolvency law has changed, allowing a business that gets into trouble the softer option of administration, meaning alternative solutions can be sought if that would secure a better outcome for its creditors.

The coronavirus crisis adds a wild card to the equation, as does Charlton’s imperilled Championship status, but the situation is far less acute even than it was as recently as the summer of 2012.

Today’s substantial creditors are former owner Roland Duchatelet and the ex-directors, but neither are hammering on the door as was happening wth others eight years ago to an extent never fully understood by the Charlton public.

It is unlikely to be in Duchatelet’s interest to call in an administrator, since the probable £50m theoretically due to his Staprix NV sits behind the original £7m owed to the old board members.

And since the latter also have recourse to the Charlton companies Duchatelet still owns – Charlton Athletic Holdings and Baton 2010 – the financial risk to them appears negligible.

Duchatelet, on the other hand, looks to be reliant on the guarantee he secured from current owner Tahnoon Nimer, which isn’t looking particularly robust right now.
His bargaining chip is the freehold of The Valley, and to a lesser extent Sparrows Lane, which anyone buying the club out of administration is likely to want to acquire at the same time. However, it’s highly unlikely a new party would pay him everything promised by ESI.

Over and above that are any number of disputed invoices raised during ESI’s brief ownership, which may or may not have any legal validity. But there won’t be any funds in the football company to pay them after the secured creditors anyway.

Despite its “investigation”, the EFL has limited authority. Contrary to the claims of former executive chairman Matt Southall on talkSPORT yesterday, the EFL made clear on March 10th that Nimer had passed its owners’ and directors’ test, along with Southall and former co-director Jonathan Heller. It simply isn’t persuaded about the extent and origin of Nimer’s funding. That it has approved Nimer anyway is a dilemma created by its own rules. It would seem perverse to punish the club for it.

The EFL has no legal authority over the club’s assets and can only impose football penalties and fines. Its ultimate sanction is to expel the club from the competition, but officials surely know that if it does that there will be compelling demands for its own conduct to be investigated. Last summer's debacle over Bury is too fresh in the memory for that to be avoided.

Meanwhile, the children in the room continue to squabble on national radio. But nobody ready to take on the club is likely to be interested in dealing with them.

Just as eventually happened in 1984, the grown-ups can work together to sort this out between them if they so choose. The ex-directors have a live claim to reverse the sale of the club – although only three of them have so far been prepared to pitch in.

There are other buyers ready to step up once the children are put to bed – in fact probably more than one group. If the club instead disappears it will ultimately be down to the agency of one individual alone. It is time for 73-year-old Duchatelet to show some maturity.