How the Addicks once came under friendly fire from Reza's Iran . . . 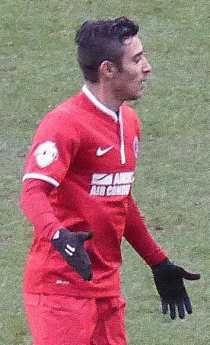 Iran star Reza in action for the Addicks

Having already become just the fourth Charlton player to play at the World Cup finals, Reza Ghoochannejhad will take on Argentina and Lionel Messi with Iran on Saturday night bidding to become the first Addicks player to score in global football's showpiece event.

In addition to the millions of fervent fans in his homeland, the striker is the centre of attention among Charlton supporters, especially after England's early exit from the competition. Ghoochannejhad's prominence for Team Melli has prompted regular mentions of Charlton on English commentaries and, you can be sure, across the world, bringing the name of the club to the attention of billions of people who might otherwise be unaware of the Valley men.

The interest shown in Ghoochannejhad's World Cup progress mirrors the support the Addicks have received since the forward arrived in SE7 in January. While his performances on the pitch, bar a stunning winning goal away against Leeds United, were largely ineffectual, Ghoochannejhad's presence has prompted thousands of comments on Charlton's Facebook page as Iranians follow his exploits in the Championship.

But the close relationship between Iran and Charlton wasn't always so harmonious. Indeed, early next month it will be six years since the Addicks sparked outrage in Tehran and beyond when they were accused of boycotting a match against Iran's national side for political reasons.

The resulting furore sparked a significant diplomatic incident as the Iranian Football Federation (FFI) complained to FIFA, and resulted in the club's press office being swamped by calls from irate Iranian journalists and even the BBC's Middle East desk. As the club's head of communications at the time, you can guess who was left to field those calls and, with the angry Iranian reporters refusing to honour club policy that any Charlton spokesman not be named, have their name the subject of ridicule across the Middle East.

Back in mid-July 2008, Dizzee Rascal was top of the charts, Mamma Mia! was the number one movie and Charlton, under Alan Pardew, were preparing to try to bounce back to the top flight at the second time of asking.

With a few other teams, including Gibraltar amateur side Lincoln, Rochdale and yes, Iran, also training in the Marbella area at the time, it was mooted that, while the focus was naturally on fitness, Charlton would be able to rustle up some friendly fixtures. If the plan sounds simple, it's because it was, yet the vagueness of the arrangements would ultimately prove problematic.

On July 9th, amid rising tensions with the US and Israel over Iran's nuclear programme, its state media reported that nine missiles, including a new Shahab-3 with a range of 1,240 miles, had been tested at a remote desert site. The move was widely condemned and when Brig Gen Hoseyn Salami, commander of Iran's Revolutionary Guards' air force, insisted "Our missiles are ready for shooting at any place and any time, quickly and with accuracy", oil prices were sent soaring.

Almost three times the distance of a Shahab-3 missile away, meanwhile, Charlton officials were finding it difficult to arrange all three matches around other commitments and decided not to face Rochdale and Iran. Of the two, the latter took greater offence.

The timing was too much for Ali Kafashian, president of the FFI, who condemned Charlton's decision as "irresponsible and unsporting"  and protested vociferously to FIFA that cancelling the friendly due to the missile tests was in direct contravention of the governing body's rules that bar political interference. At the same time, Egypt also pulled out of a planned game amid reports it was in retaliation for an Iranian film that honoured the assassin who killed Egyptian President Anwar Sadat.

Passions were inflamed, and the club's insistence that the missile tests had nothing to do with anything, and that the game hadn't been 'cancelled' because it had never been arranged in the first place, were treated with suspicion and outright hostility. I even had to refute reports that the British government had instructed the club that the game be cancelled and this line was supported by Sir Richard Dalton, the former British ambassador to Iran, who thankfully rejected any suggestion of political intervention, telling the Iran media that British law does not allow the government to instruct sports teams about their opponents. (This would prove to be less of an issue as the England cricket team cancelled a tour to Zimbabwe the same summer).

As I argued repeatedly with the Iranian journalists, it seemed bizarre that Charlton were being accused of such a politically-motivated decision when, eight years earlier, the Addicks had become the first English club to sign an Iranian player, Karim Bagheri. "The Iranian Zidane" became the first Asian to play in the Premier League, even if his impact at The Valley was notable more for his table-tennis prowess at Sparrows Lane and the swarms of Iranians who watched him play for the reserves than his solitary first-team appearance.

Ultimately, the row fizzled out. FIFA's legal department took no action, Charlton recorded a convincing 5-0 win against Lincoln with Jerome Thomas (2), Stuart Fleetwood, Andy Gray and Scott Wagstaff on target. Unfortunately, that result and their argument that the Iran friendly had never been arranged proved as persuasive as they would be all season. A disastrous campaign that saw Pardew dismissed in November and replaced by his equally unsuccessful assistant, Phil Parkinson, culminated in relegation to the third tier for the first time since 1981.

Fast forward six years and Reza Ghoochannejhad and Iran are spreading Charlton's name across the country in much more positive fashion. Kafashian, still president of FFI, was even quoted as having made a joke ahead of the game against Argentina when, having been asked by an American journalist about whether the Iran players had been instructed not to exchange shirts, he told journalists: “If Mr Lionel Messi wants all 10 Iran shirts, he can have them!"

Football has supplanted wrestling and weight-lifting as the number one sport in Iran, and Daily Telegraph reporter Jeremy Wilson reported this week on the huge progress that had been made by the national team in face of stifling international sanctions over the government’s uranium-enrichment programme.

What's more, Iran president Hassan Rouhani was pictured on Twitter watching their first game against Nigeria in an Iranian team shirt. It was believed to be the first off-duty picture of an Iranian president and was considered particularly remarkable because Rouhani is a cleric. More Iranian diplomats were pictured watching the match in Vienna during a break in nuclear negotiations with western officials.

After a 0-0 draw with the Super Eagles in their opening match, the Persian Cheetahs take on South American giants Argentina on Saturday when Ghoochannejhad, who has scored 10 goals in 15 international outings, will be seeking to go one better than Charlton's other three previous World Cup representatives and record a goal. Of John Hewie (two games for Scotland in 1958), Mark Kinsella (four games for the Republic of Ireland in 2002) and Claus Jensen (one game for Denmark in 2002), South Africa-born Hewie came the closest to netting, striking the post from a penalty in a 2-1 defeat to France.

Whether Ghoochannejhad can eclipse Messi, or find the net against Bosnia & Herzegovina, remains to be seen, but regardless of his and Iran's success, they are taking Charlton's name to new corners of the world.