Forest may be our only opportunity to act 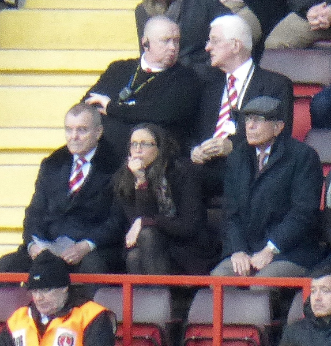 Mind your back: Meire and Murray with two security men close behind to keep them safe from irate fans during the Wolves game

The time for action is now.

After Saturday’s game against Nottingham Forest, Charlton are not due to play at home for another three weeks. In the meantime, the club we have loved is crumbling away before our eyes. It is not bad luck or injuries that are killing Charlton, or even under-investment. It is chronic bad management under a pitifully inexperienced and under-qualified head coach and chief executive.

Bad decisions are manifest at every level of the organisation, the latest being the decision to turn the ticket office over to an NHS call centre and pull down the shutters two days a week. It surely won’t be too long before those shutters come down full-time - and there could hardly be a more apt metaphor for what owner Roland Duchatelet and his stooges are doing to the club.

Chief executive Katrien Meire’s inadequacy and the poverty of the Belgians’ aspirations for Charlton have been laid bare once again with the recent publication of the video of her comments at a conference in Dublin in November. She finds our loyalty to Charlton “weird”, but that is nothing to what we make of her patron.

On the pitch, the crazy attempt to sustain Championship football without a competent management and coaching structure has exposed promising young players to a schedule of matches that is obviously beyond them both physically and mentally.

In November “interim” head coach Karel Fraeye parroted the necessary fiction in the world of Duchatelet that the squad was big enough and good enough. Three points from the last seven games have proved him to be a cypher or a fool - and probably both.

It will be no surprise if January brings the return of former Duchatelet head coach Jose Riga and anyone else who can be rounded up on the cheap. But whatever changes are made are unlikely to alter the club’s trajectory or the supreme leader’s masterplan.

Left in charge, these Belgians will destroy Charlton Athletic. They are doing so already, as week by week more previously loyal and devoted supporters of many years standing turn their backs reluctantly on The Valley.

Many of those who remain are being drained of the passion that has tied them to the club for generations. Their commitment is now in stoppage time with scant hope of a late goal to reprieve it. Yet this match is not quite over.

On Monday, Voice of The Valley disclosed that since August the club’s former chief executive Peter Varney has been seeking to set up a meeting to present an investment offer to the owner or his representative. I have made available below, as in VOTV124, the exchange of emails surrounding this approach. Note that they also involve - at Duchatelet’s instigation - chairman and former owner Richard Murray.

People can judge these exchanges for themselves, but knowing the recent history between Murray and Varney I am convinced that it is Murray whose influence has stood in the way of this meeting taking place and fear that he will continue to obstruct any approach that involves Varney.

Ultimately, it can only be Duchatelet’s decision to sell, but Murray can be a hero or a villain here. It’s his choice - there is no middle ground. It is not easy to see how blocking Varney can be in the best interests of the club, but Murray has the opportunity to answer the question publicly as to whether he will now encourage the owner to explore this interest or believes instead that continuing with the Belgians is a better idea. And history will judge him accordingly.

My own view is that the Duchatelet ownership is finished already. It lacks not only a coherent and sustainable plan for the club, but also the personnel to deliver any such scheme. It is a zombie administration, walking the club off the edge of a cliff and it will take Murray with it.

If the team is relegated to League One again Charlton may never recover. It will take a huge financial hit and under this owner surely faces a future of a team made up of youth players and free transfers, playing before tiny crowds and stands closed in a vain attempt to stem ever-mounting losses.

Duchatelet will only take the financial pain. He hasn’t attended a match at The Valley since October 21st, 2014. That’s the extent of his emotional investment. Yet his chief executive takes ours for granted - and ridicules it to an audience in Ireland. There is no place for her in OUR club either.

Crucially, Charlton in League One - or Two, or worse - will be much less attractive to a potential investor, because of the sharply diminished central revenues, accelerating debt and declining support. We have one opportunity to stop this and that is to persuade the Belgians to sell up now.

From my ongoing conversations with Varney, with whom I have worked for nearly 20 years, I know that he would do everything he could to broker a takeover that can rescue Charlton now, before the January transfer window closes, and with it maximise the club’s chances of Championship survival.

I also believe that his potential investor has the resources to invest in the playing squad, whereas we know from experience that the current owner will not invest to the level or on the experienced players required to compete.

Varney has no ambition to return himself, but he does want to see the club he has supported since 1960 prosper again and will assist in creating the circumstances for that to be possible.

For that to happen, however, we must bring Duchatelet to the table now. Our biggest strength as supporters is in numbers. For that reason Voice of The Valley is calling for a massive demonstration outside west-stand reception - and the boardroom - after Saturday’s game, regardless of the result. Forget the politics and divisions, we need to unite behind one hour-long protest, with one message.

As John Lennon didn’t quite put it: “We are all saying, get out of our club!”

We shouldn’t forget that Charlton - and only Charlton - were able to resurrect their derelict ground when all seemed lost, in an era when the financial rewards in the game were much lower. If we could do that when it had seemed impossible in 1985, surely we can rouse ourselves now to fight to save our club from a threat of similar proportions?

I recognise that we may not succeed. The investment available may go elsewhere in London because the current owner’s head remains stuck firmly in his posterior, with Murray and Meire alongside to reassure him that every decision is the right one regardless of the evidence.

But if we don’t try then I believe we are betraying our club’s past as well as its future. For the Charlton Athletic that has been cherished and nurtured by generations of us in South East London, across Kent and beyond, is surely more than some absentee landlord’s plaything.

It falls to our generation to be the ones who must once again stand in the way of those whose incomprehensible antics may otherwise see it perish. We must stand - or sit - in their way this very weekend. January 23rd, when Blackburn Rovers visit, will be too late to get things done in the transfer window.

If we do not do so then we may have many years in which to rue the consequences.