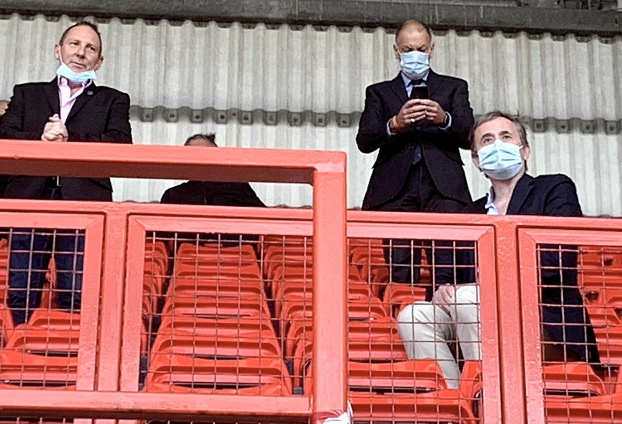 Season at stake as Addicks come up in court

Charlton return to action of sorts at Loftus Road on Tuesday night, but what is likely to be a far more meaningful contest is due to be played out in a Manchester court room hours before the one on the pitch gets under way.

We now know that the 2pm court hearing in Manchester over the sale of East Street Investments is between Lex Dominus and Panorama Magic Limited.

Panorama is the Abu Dhabi registered business through which Syrian-born Tahnoon Nimer continues to hold 65% of the shares in Charlton Athletic Football Club. The other 35% remain with former chairman Matt Southall.

The latter was never party to the June “takeover” deal, but is subject to it because of a “drag along” clause in ESI’s articles of association. He cannot refuse to sell his shares on the same terms as Panorama. He is entitled to benefit on those terms, however.

Lex Dominus is a shell company that was set up by lawyer Chris Farnell in October 2018 and appears to have remained dormant until Manchester businessman Paul Elliott took it over on June 6th, whereupon Farnell resigned as a director.

This is not dissimilar from the role JMW lawyer Michael Blood played in establishing East Street Investments as a vehicle to own the club in 2019.

What makes it unusual is the extent to which Farnell was also involved with the seller. In March, he had begun to act as Nimer’s lawyer in his very public dispute with Southall.
On April 6th, he was appointed as a director of ESI.

Yet the entity which entered no later than June 10th into an agreement to buy ESI from Nimer was itself controlled by him until June 6th, as a matter of record.

We also know that the sale of ESI was in train much earlier. Leaving aside that someone agreed heads of terms of an agreement to buy it with the previously banned ex-Watford chairman Laurence Bassini in April, we know its actual sale was first flagged to Southall on Friday, May 22nd, when it was publicly disclosed on the club website.

Nimer’s representative Marian Mihail said on June 4th, one day after the approach by Peter Varney/Andrew Barclay first emerged publicly, that it was probably too late, because a sale of ESI had already been agreed and the club was just waiting for the notice period to expire.

Over the bank holiday on May 31st, however, it is clear that someone was still trying to sell the club to former Swansea chairman Huw Jenkins. Other interest then also emerged, including a Portuguese group in touch with Mihail and an agent acting for Joseph Cala who was struggling to get into discussions.

At that point Lex Dominus was legally controlled by Farnell, who had been speaking to Varney over a number of weeks, but had not told ESI and Charlton director Marian Mihail that, at least according to the Romanian. Farnell then clamed that he and Varney had never discussed "ownership", despite a non-disclosure agreement being brought forward.

Farnell later said in his statement released on July 31st that: “I have known Paul Elliott for some time and I was aware that he had ambitions to acquire a football club. Knowing there was an opportunity at Charlton I naturally told him…”

Regardless, it is evident that Farnell only transferred Lex Dominus to Elliott after it became clear that Jenkins, a former client of his, would not proceed.

Farnell has said that he never acted for Elliott or Nimer in the transaction, and that he ensured Nimer had independent advice. But there is at least a perception that he had a significant conflict of interest, which might itself beg questions about the legitimacy of any contract. His role is already being examined by the Solicitors’ Regulation Authority.

We haven’t seen the latest claim at this point, but the substantive issue to be decided is whether Lex Dominus has the right to prevent Panorama selling ESI and thus the club to a third party, hopefully the American Thomas Sandgaard, who is now in London and watched the friendly defeat by Crystal Palace at the weekend.

This is where the water gets muddy, however, because Charlton told fans that the transaction was complete back in June. The club still says on its official website that “East Street Investments were taken over [past tense] by a consortium led by businessman Paul Elliott on June 10th 2020”.

An official report published by the club that day - and still available on line - is quite clear that the takeover has been completed and that Elliott would become chairman. Although it references the need for EFL approval, it does not say that the takeover is contingent on this. It says that it has happened.

Elliott then explained how he was talking to Lee Bowyer, was reported to have helped pay the wages in May, June and July and repeatedly appeared with Farnell alongside secretary Chris Parkes and his wife at matches, prompting the EFL to ask the club to explain itself.

The reality is demonstrated by the fact that no transfer of control has ever been registered at Companies House, which is a legal requirement, and that was confirmed in evidence when ESI took legal action in July to reverse unauthorised changes made to the official record by minority shareholder Southall.

The club was not truthful when it reported on June 10th: “The arrival of Elliott’s consortium means the departure of former owners Tahnoon Nimer and Matthew Southall.”

Its June statements were misleading, at best. A takeover can lawfully be completed without EFL approval, as the original ESI deal with Roland Duchatelet was in January, but at least in this case it was always contractually contingent on receiving it. Otherwise it would also, as did the January deal, have breached EFL rules.

In the event, that approval has not been forthcoming, as it was not in January, with Nimer failing to show source and sufficiency of funds then and Elliott and ESI directors Farnell and Andrei Mihail all disqualified under the EFL’s owners’ and directors test on August 7th.

Farnell was subsequently removed as the club's lawyer by Mihail on August 12th after he attempted to bring in the former Southampton boss Dave Jones as football adviser - above manager Lee Bowyer and director of football Steve Gallen.

Farnell and Andrei Mihail have now resigned from the ESI board, but counsel for Lex Dominus is likely to argue that the contract will be unreasonably frustrated if the club is sold to someone else before Elliott has had a chance to appeal his own disqualification by the EFL.

In effect, they will say that Panorama has a live commitment to sell to them. An injunction, if granted, will allow that process to play out, at least pending a further court hearing to decide the issue. Even if the injunction is not granted, it will potentially give Lex Dominus leverage in a potential future claim against Panorama, although that might be difficult to bring given where the latter is based.

At this point it is almost inconceivable that Elliott could ever run Charlton. Even if he succeeded in court and in his appeal to the EFL, it’s unlikely it would be safe for him to attend matches. He would very likely seek to substitute himself as the seller to Sandgaard or someone else.

However, with the clock running down on the new season – indeed with that meaningless EFL trophy clash against AFC Wimbledon the same evening – the effect of any legally mandated delay could be severe on the team’s preparations.

While Bowyer is able to add Adam Matthews following the departure of Tom Lockyer to Luton on a free transfer under his release clause, he is currently forced by the EFL to count the likes of Aaron Henry, Junior Quitirna and Brendan Wiredu in his EFL-restricted 23-man senior squad, because they have previously made cup outings. This is no basis to contest a League One campaign with any hope of success.

There are no guarantees that Sandgaard can complete his own takeover in short order and supposedly there is a rival Istanbul-based investment fund waiting in the wings. But removing Lex Dominus from the field will be an important step to restoring rationality.

If you've been following events this far, however, you'll already know that it would be unwise to bank on it.