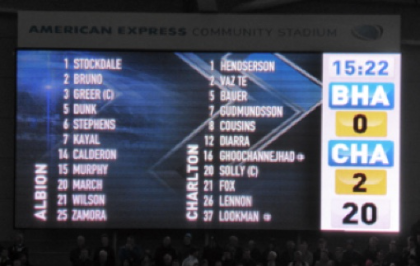 Early leaders - Charlton were two goals up after five minutes

When you’re struggling, there are so many different ways to lose.

Charlton’s electric start to the game at the Amex Stadium - and in particular 18-year-old Ademola Lookman’s fine first senior goal - lifts the 3-2 defeat by Brighton & Hove Albion above the run of 11 previous dismal losses in 15 games stretching back to August.

There was hope to be drawn from a strong first half that might have seen the Addicks 4-0 up at the break against unbeaten opponents, who were looking to create a new club record by avoiding defeat. Indeed, it was only the third time since the opening month of the 2015/16 campaign that Charlton had scored twice in a match and the first such occasion all season away from home in the Championship. They had previously scored just four times in nine road trips.

But it was also the fifth time in eight outings that they have conceded three goals. Poor second-half defending, including Patrick Bauer’s red card on the hour for pulling back Bobby Zamora to deny the veteran a goalscoring opportunity, saw the the visitors overhauled in the last ten minutes. That was an unwelcome echo of the 1-0 defeat at Reading seven weeks earlier, when Bauer was also sent off to end Charlton resistance, albeit Guy Luzon’s team had offered nothing whatsoever offensively that afternoon.

Possibly the more significant departure had been the loss of Harry Lennon with a head injury on 25 minutes. Although the 20-year-old was making his first Championship appearance of the season and only his second league start for the club, his replacement by Naby Sarr seemed to coincide with increased uncertainty in the heart of the defence. With Bauer again suspended, Alou Diarra will almost certainly have to move back into the rearguard for next week’s visit of Leeds United, despite his switch into midfield having been key to the two victories in six games recorded under interim head coach Karel Fraeye.

That’s not bad luck, however, It’s the direct consequence of the club’s decision to operate without the required cohort of experienced central defenders - and to have released so many of them over the previous year. It also impacts at a crucial time for the team’s longer-term fortunes, because with just 16 points after 19 matches Charlton are already in serious trouble.

By the time the upcoming transfer window opens at midnight on January 2nd, they will have played 25 matches and have just 21 remaining. By deadline day that will have dwindled to 17. To match the 31 points Bob Peeters had amassed by the halfway point a year ago (matches 24-26 were lost), they would need to win an unlikely five out of six before FA Cup third-round day.

Luzon added 29 points in the final 20 matches of last season, while his predecessor-but-two Chris Powell put on 32 over the same period in 2012/13. And 27 were accumulated over the last 20 in 2013/14, three under Powell - courtesy of Johnnie Jackson’s memorable header against Queens Park Rangers - and the remainder during Jose Riga’s tenure.

Even then, however, the Addicks started with a base of 24 points, indicating just how tall an order survival will become unless the team can pull out three victories before the window opens. In particular, the December 15th midweek home game against bottom club Bolton Wanderers and the Boxing Day trip to Bristol City, currently one place above the Addicks with the same number of points, look absolutely critical.

Indeed, it’s the clutch of teams scrapping for points at the bottom of the Championship table that might provide Charlton fans with some solace. Second-bottom Rotherham United and MK Dons, 20th on goal difference, are in similar dire straits. It is the Addicks’ failure to beat either of them in their head-to-head contests that condemns the SE7 outfit to their current placing in the bottom three.

Only Blackpool had fewer points than the current bottom five after 19 matches a year ago - eventually relegated Wigan Athletic and Millwall had 17 and 20 respectively. So this might just be one of those years when a mid-40s tally is sufficient to stay up. In fact, while 48 points is the average requirement, there have been four occasions in the last ten years when 43 points would have been enough, although in practice the gap to the fourth bottom side has been much larger.

Mind you, Brighton had just 18 this time last season and they now sit proudly on top of the Championship, which is a reminder that fortunes can change quite dramatically - with the right leadership, of course.