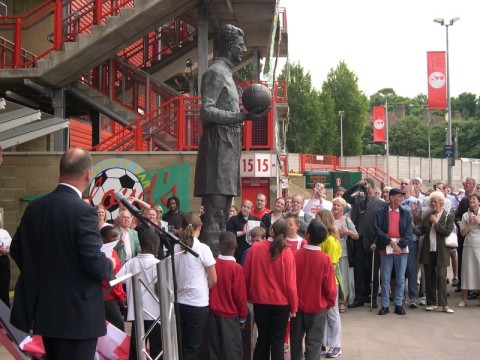 Looking up to a hero: Bartram's statue unveiled in 2005

To mark what would have been Sam Bartram's 100th birthday, on January 22nd, 2014, MATT WRIGHT reflects on the lasting significance of the famous Charlton goalkeeper and tells the tale of one of his most memorable matches in an Addicks shirt.

When it comes to goalkeeping legends, few rate higher than Bert Trautmann, the Manchester City custodian who once played on in an FA Cup final after breaking his neck. Even legends have heroes, though, and Trautmann's was Sam Bartram.

Over the course of 19 years, encompassing the 1930s, 40s and 50s, Bartram amassed 623 appearances for Charlton. But while such statistics are obviously impressive, it was more his adventurous nature and flamboyant style that secured his place in folklore.

Not for Sam was the traditional goalkeeper’s practice of maintaining a constant vigil inside his penalty area. Spotted as often outside the box - racing forward to make an interception in a fashion for which Tottenham Hotspur keeper Hugo Lloris is currently praised – as inside it, Bartram became known throughout the land, helped by his shock of red hair and reportedly, a party trick of whipping off his cap before heading the ball away.

The Tyneside-born goalkeeper quickly earned plaudits at The Valley, where he would remain number one throughout his career, and beyond. In Trautmann’s Journey, a biography of the great German, Catrine Clay writes:

“All this time Bert was improving his game, watching other players, studying them, especially goalkeepers, and always learning. … later there was Sam Bartram, goalkeeper at Charlton Athletic, who made incredible saves in an unorthodox styles, wandering up to the halfway line or clearing the ball with a header, keeping the crowds entertained – which was, Bert knew, all part of the job.”

Like Trautmann, Bartram, who was signed from Boldon Villa by manager Jimmy Seed, won the FA Cup during the course of his career, the Addicks’ man’s highlight coming in 1947 when he kept a clean sheet over 120 minutes against Burnley at Wembley, enabling Charlton to win 1-0 after extra-time.

But arguably just as memorable a match was a game at Stamford Bridge on Christmas Day 1937 – and perhaps it’s fitting that the tale should be retold during a current Championship campaign that has already seen one abandoned match and three further postponements.

Seventy-six years ago, a crowd of 41,484 assembled to watch Seed's First Division high-fliers take on Chelsea and Don Welsh gave the visitors the perfect start when he opened the scoring after nine minutes. George Mills equalised for the Blues four minutes later, but no one could have predicted the events that would lead to a headline in the Daily News that read 'Fog Stops Game but Goalie Didn't Know'.

Thick fog wasn't unknown or even uncommon in London in a time before smokeless fuel and clean air legislation, but 16 minutes into the second half, it became impenetrable, prompting the referee to abandon the game.

It was the worst Christmas fog since 1904. The Daily News reported that a cross-channel ferry had been stranded at sea for seven hours while attempting to locate Calais and that firemen had been unable to see the fire that they were fighting.

Nevertheless, it was the story of Sam Bartram, who continued to tend his goal unaware that the game in which he was playing had been called off, that endures the test of time.

The Chelsea programme from the equivalent fixture in 1948/49 sets the scene: "It was one Christmas time; a crisp and sunny morning. The game had been in progress for some time when, from the direction of Lots Road power station, a bank of fog suddenly appeared and quickly descended like a blanket upon the pitch.

"It was fantastic - but the game went on as best as possible. Behind each goal spectators lit newspapers that, by some miracle, bearing in mind it was Christmas time and none had been published, they seemed to find from somewhere."

In his autobiography, Bartram takes up the tale with the skill that saw him take up a position as a journalist for the Sunday People after the end of his playing days: "The referee stopped the game, and then, as visibility became clearer, restarted it. We were on top at this time, and I saw fewer and fewer figures as we attacked steadily.

"I paced up and down my goal-line, happy in the knowledge that Chelsea were being pinned in their own half. 'The boys must be giving the Pensioners the hammer,' I thought smugly, as I stamped my feet for warmth. Quite obviously, however, we were not getting the ball into the net. For no players were coming back to line up, as they would have done following a goal.

"Time passed, and I made several advances towards the edge of the penalty area, peering through the murk, which was getting thicker every minute. Still I could see nothing. The Chelsea defence was clearly being run off its feet."

Of course, what Bartram didn't realise was that the referee had abandoned the fixture and all of the players had left the pitch. But back in the dressing room, despite Bartram's larger-than-life extrovert character, the Charlton players were oblivious to his absence.

"Everyone looked blank. Then, as one, it dawned on the Charlton players what had happened. Sam had been left out there in the fog. He had not heard the whistle. He thought the game was still in progress. A search party was sent out."

Bartram recalled: "After a long time a figure loomed out of the curtain of fog in front of me. It was a policeman, and he gaped at me incredulously. 'What on earth are you doing here?' he gasped. 'The game was stopped a quarter of an hour ago. The field's completely empty'.

"And when I groped my way to the dressing-room, the rest of the Charlton team, already out of the bath and in their civvies, were convulsed with laughter."

The amused reaction continued in the following day’s papers, with one headline proclaiming “Phantoms at Stamford Bridge – Game abandoned with Bartram Missing”.

Bartram would play for Charlton for another 19 years but none of his matches were stranger than that foggy day at the Bridge*.

What’s more, ultimately it was Bartram who had the last laugh. He passed away on July 17th, 1981, aged 67, but now with a giant bronze statue erected outside of The Valley to mark the club’s centenary year, his connection with the club he represented remains constant and evident to all who arrive in SE7.

* The two sides actually met two days later in the reverse fixture at The Valley, when the Addicks won 3-1, and when the abandoned match was replayed at Chelsea in late April, Welsh again scored in a 1-1 draw.

Acknowledgement: With grateful thanks to Mike Blake's Sam Bartram: The Story of a Goalkeeping Legend (Tempus Publishing Limited).