Buy issues published during the 2020/21 season 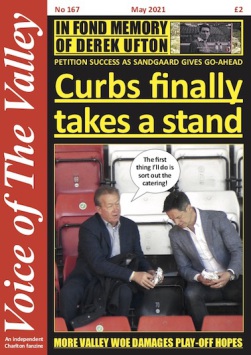 Voice of The Valley published its eighth and final issue of the 2020/21 season on Saturday, May 1st, with Charlton's League One play-off fate still in the balance.

VOTV167 includes full coverage of recent matches, but as always there is much more. On a weekend when the club joined football's social media boycott, Matt Wright looks at new manager Nigel Adkins' Twitter habit, as well as the fall-out from the abandoned European Super League.

Rick Everitt reviews ex-goalkeeper Graham Tutt's revealing new autobiography, co-written with Charlton fan Matt Eastley, and remembers former skipper and director Derek Ufton, who has died aged 92. Plus he shares some personal memories of the 1980/81 promotion campaign, which concluded 40 years ago. And, of course, we report on the success of our petition to get a Valley stand renamed after former boss Alan Curbishley, while Airman Brown opens his diary for the final time in 2020/21.

Wyn Grant looks at the signficance of managers to a team's success, while Martin Cowan reflects on the departed Lee Bowyer's contribution and Paul Breen has been down to the Royal Oak in Charlton Lane to report on its recent transformation. Plus we find out what happened when one Charlton fan got married on FA Cup final day in 1947. Bringing up the rear, as ever, is regular writer John Ingram, who reflects with typical panache on some of the Addicks' past encounters with Manchester City.

VOTV167 is available to order below for first-class posting out. It's still just £2 for 40 packed pages.

Adkins fronts up penultimate issue of the season 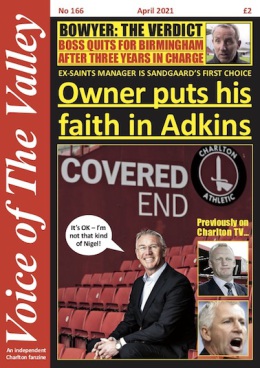 Rick Everitt looks in detail at his arrival at The Valley and what his past performance tells us about what Charlton fans might expect. Plus there's an detailed evaluation of Lee Bowyer's near three-year spell as manager.

Elsewhere in VOTV166, Matt Wright challenges some of the enduring myths surrounding the Addicks' past – a surprising number of which seem to involve Crystal Palace – and former Charlton director David White takes issue with our campaign for a stand to be named after ex-boss Alan Curbishley. And there's more from regular correspondents Martin Cowan, Wyn Grant and John Lawson, while John Ingram has gone back in time to clamber aboard a Lewis's away coach one more time in his dreams (or nightmares!).

Voice of The Valley returned on Saturday, February 20th, with its sixth issue of the 2020/21 campaign and a new initiative, triggered by former chief executive Peter Varney, writing in its pages. We called for Alan Curbishley to finally be recognised with the naming of a stand at The Valley, the petition quickly reached 2,400 signatures – and the club agreed to rename the east stand after him on April 9th. 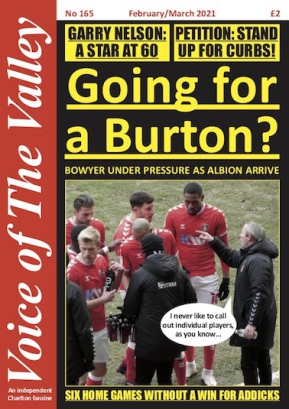 Varney's comments came off the back of the former manager's return to prominence on Valley Pass Live, the club's online matchday coverage package, which also forms the basis of a piece by Matt Wright looking at the real Alan Curbishley who was often hidden behind the manager's mask during his 15 years in charge of Charlton.

We've got a treat in store for readers with a major new interview with popular former Charlton striker Garry Nelson, who also talks about Curbishley over an eight-page feature, among many other things. That's Nelson (above) in 1994 at the FA Cup fifth-round game with Bristol City (picture Steve Bridge). As recent Valley Pass viewers will know, he doesn't look much different now (well, minus the wig!).

VOTV165 is still available for first-class posting out, and you can order your copy below for just £2 - plus £1.20 postage and transaction fee. That's eight years for which we've held the current cover price. 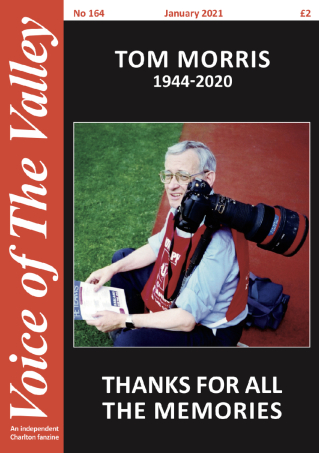 Long-serving Charlton club photographer and Voice of The Valley contributor Tom Morris (left) was the subject of a major tribute in the first issue of 2021.The 76-year-old died suddenly after Christmas. His pictures had featured extensively in VOTV going back to 1988.

VOTV164 also takes a close look at the Addicks' recent indifferent spell, including extensive coverage of the extraordinary 4-4 draw with Rochdale on January 12th and a special focus on Lee Bowyer's future, as well as examining the travails of striker Omar Bogle by Martin Cowan.

There is high praise for the new matchday Valley Pass Live service from editor Rick Everitt, as well as reflections on players taking the knee from regular contributor Paul Breen. Plus Andy Lopata discusses the issue of mental health in football, including what happened to former Charlton striker Leon McKenzie when he needed support back in 2010.

Matt Wright has followed up his VOTV163 piece about Charlton's record signings down the years with an equally enlightening narrative about the club's record sales, while Wyn Grant reflects on Sam Bartram and stalwart John Ingram names his ten favourite Charlton matches - and best-ever XI.

VOTV164 is available to order below for first-class posting out. 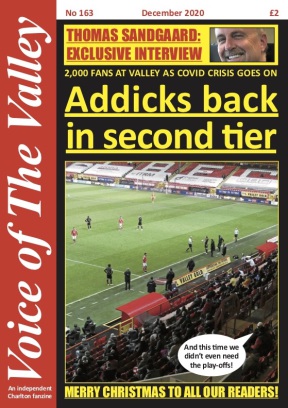 Thomas Sandgaard during our exclusive interview

Addicks owner Thomas Sandgaard is the headline act in VOTV163. We pulled out all the stops to bring you the most in-depth interview with the main man since his takeover took place in September, running to 3,000 words.

The Addicks' progress on the pitch had begun to stutter in recent weeks, but the temporary return of fans to matches gave us plenty more to reflect on. We also pay tribute to former striker Matt Tees, who has died aged 81.

VOTV163 includes all your favourite features, with coverage of the recent action, Airman Brown’s ever-popular diary, Matt Wright on Charlton’s record signings and much more. 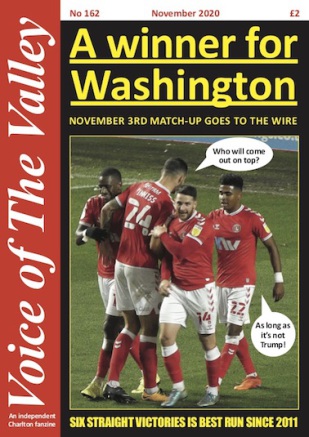 The focus was finally back on football in new VOTV162 after Lee Bowyer's reshaped squad clocked up six consecutive League One victories - and nine hours without conceding a goal - between October and November.

We take a detailed look at all Charlton's new signings and cover the seven matches since the last issue, including the 3-2 midweek win over Fleetwood Town, while Simon Matthews files his annual report on where the Addicks' former players are now.

Paul Breen muses on how the recent trauma at Charlton reflects a wider malaise, Wyn Grant looks at the recent the Premier League power grab, John Ingram shares his fond memories of King Arthur Horsfield and Matt Wright reflects on Charlton's Chelsea connection, as well the surprising rise of former Addicks in the media. 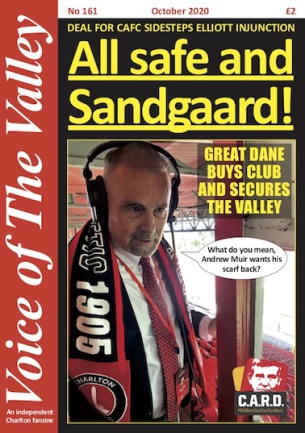 Charlton's third takeover announcement of 2020 is finally one that Voice of The Valley can give its full-throated support - and the second issue of the campaign, published on October 3rd, is in predictably euphoric mood.

Editor Rick Everitt looks in depth at how it happened, how the news was broken, and reports in detail from the courts, as the rival group fronted by Paul Elliott tried in vain to stop outgoing owner Tahnoon Nimer's representatives putting the club beyond their reach.

Rick also pays tribute to former VIP director Steve Clarke, who has died at the age of 65. Ahead of Macauley Bonne's move to QPR on October 2nd, Matt Wright focuses on some of the players who left over the shortest-ever close season, and one who hasn't left yet, while Wyn Grant looks beneath the League One salary cap and Darryl Chamberlain explains why we can now  put to bed fears the club will ever move to the Greenwich Peninsula.

We also welcome back Steve Dixon, who explans why he harbours a grudge against Luton Town, and regular columnist John Ingram has an unusual experience at Lewisham market, alongside all the usual features.

VOTV161 can be purchased as an individual copy (below). 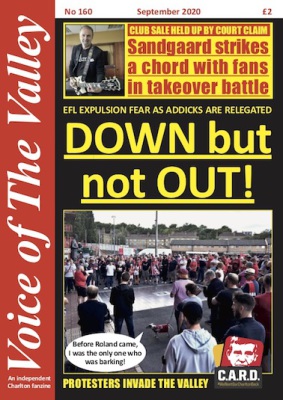 Voice of The Valley returned to print with Thomas Sandgaard now leading the battle to rescue the Addicks and, as you would expect, the new issue devotes plenty of space to developments in the ongoing takeover battle.

We also reflect in detail on the disastrous delayed end to the 2019/20 season, while Matt Wright remembers the tragedy of Pierre Bolangi's death 20 years ago.

On a happier note, Brian Cowan looks back to 1984/85 - the last full season at The Valley before Charlton moved to Selhurst Park - and Martin Cowan even further to the glorious Addicks autumn of 1976. Plus the ever-reliable John Ingram writes on his memorabilia collection and the difficulty it caused him with girls.