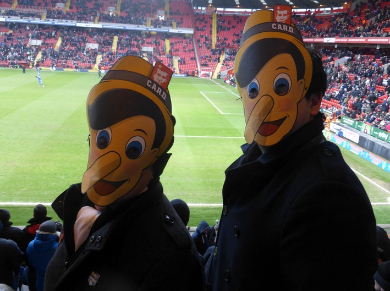 Faces in the crowd: fans donned Pinocchio masks at The Valley
By Rick Everitt
Former Charlton chief executive Peter Varney has hit back at the current regime at the club after owner Roland Duchâtelet and chief executive Katrien Meire contradicted each other about his investment approach in the space of 24 hours.
In a South London Press interview released on Friday, Duchâtelet said: “I have to put something straight. It was an email which he sent and it read as follows ‘can we talk about an investment opportunity in Charlton’. Now, what is an investment opportunity? Maybe they want to invest in a new billboard or I don’t know.
“I diverted this email to my CEO to handle it. It is only five or six months later it became clear that what he wanted to talk about was a takeover of the club.”
However, little more than 24 hours later Meire contradicted this claim after approaching me outside The Valley where I was selling VOTV when she arrived for work just before 1.30pm on Saturday.
Asked about her failure to make herself available to meet Varney over a three-month period, including cancelling several appointments at short notice and not rearranging them as promised, Meire said: “The club is not for sale, so what’s the point?”
This is the first time either of the Belgians has offered any substantive explanation for the meeting never taking place, but it is obviously inconsistent with Duchâtelet’s own position.
Meire was targeted on Saturday by fans’ group the Coalition Against Roland Duchâtelet (CARD), which distributed 2,000 Pinocchio masks, 10,000 Pinocchio stickers and 1,000 Pinocchio beer mats, while supporters dressed as Pinocchio attended a post-match demonstration in the west stand car park. There have persistent questions about her truthfulness over the last two years.
In an unrelated blunder, the club used a picture of former player Alan Campbell on its big screen to accompany a minute’s applause to mark the passing of teammate Graham Moore, who played for both Charlton and opponents Cardiff City.  Moore’s relatives were among the crowd.
Responding to the confused message from The Valley about his approach, Varney - now executive vice-chairman of Ebbsfleet United - commented on Monday: “It was disappointing to be referred to by Roland Duchâtelet in his interview last week as a middleman and potential billboard salesman.
“I have never met Roland and that is a shame because his view of me will be coloured by his chairman's negative views and he may have got some benefit and insight into the club from a meeting on one of his visits to London.”
He went on: “His chief executive Katrien Meire has now admitted that despite agreeing dates to meet me that she cancelled them because there was no purpose in having a meeting to discuss a sale of the club when it is not for sale.
“So here we have the owner thinking I was selling a billboard and the chief executive thinking I was trying to introduce a buyer to the club. They can't have it both ways! A simple brief meeting would have made everything clear.”
Varney explained: “Roland has made much of my use of the word ‘investment’. The individual I wanted to introduce was prepared to meet Roland in Belgium. He declined in January, but that offer remains open.
“Rather than make comments about selling billboards he could make 30 minutes available to meet the person involved and then he wouldn't have to second guess what the interest is. The interest is in a purchase of the club, but also investing in the club from a sponsorship perspective, which is important because of the Financial Fair Play rules.
“Both Roland and Katrien seem to go out of their way not to show respect to people around the club who could be an asset to them but instead have converted them into enemies of the regime and that has now extended to a large element of the fan base. The club is, of course, the victim in all of this and that is the saddest part of all.”
Varney served as chief executive at the club from 1997-2008, before returning as executive vice-chairman in 2011, following relegation to League One in 2009.
The team is currently 23rd in the Championship, effectively seven points from safety, and has won once in 15 matches. Under the current regime there have been five changes of head coach in under two years, with all the incoming men either Belgians or having worked for Duchâtelet in Belgium.
Varney said: “In my time at the club The Valley was completely rebuilt and the turnover of the business was grown to over £40m. In addition, the team was promoted to the Premier League twice, enjoyed eight seasons at that level, and on my return to the club we secured the League One title and went on to finish ninth in the Championship.
“I was lucky to work with two great managers in Alan Curbishley and Chris Powell and to have a staff that were dedicated, supportive and hard working.
“I do feel that for the job I did I have earned a degree of respect and also that I could have provided some sound advice to the chief executive, but it was clear from the start that that was not wanted.”
He concluded: “Anyone who has ever been the chief executive of a multi-million pound business will have their own vision for how that business should be run.
“It is true that I would be in at 7.30am each day and on a matchday there was always a script to ensure every little detail of the day was covered. My critics would probably say I was too hands on!”
See the complete pre-Christmas email exchange, as published in VOTV124, below.