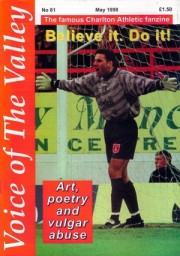 Voice of The Valley was launched in early 1988 and quickly became one of the mainstays of the emerging football fanzine movement.

What made the Voice stand out from the pack was that Charlton had been tenants at Crystal Palace's Selhurst Park for the previous two years. And despite gaining promotion to the First Division for the first time in 29 years, many fans refused to make the awkward journey across South London.

The Voice became the chronicle of the campaign to return home and its editor Rick Everitt the Charlton reporter and later sports editor of the South East London Mercury, which was already championing the cause.

From 1988 to 1991, Rick was assisted by fellow supporter and Valley campaigner Steve Dixon, who went on to join the club staff.

For nearly 14 years it documented the twists and turns of the club's fortunes, including the Valley Party's 14,838 votes in the Greenwich local elections of 1990, the triumphant return home in 1992 and elevation to the Premier League in 1998.

Now this site will bring some of those memories back to life, as we develop the Voice of The Valley online archive to make some of the best writing from the original issues accessible to a new generation of Charlton supporters.