Varney says he is "not involved" in Charlton bid 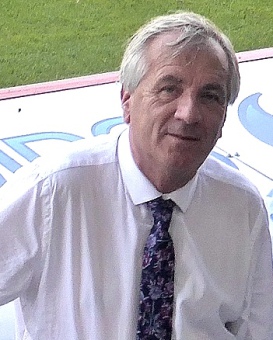 Peter Varney has confirmed that that he is “not representing or involved with any buyer looking to acquire Charlton Athletic”, writes Rick Everitt.

But the former Addicks chief executive says he is fit and well and plans to continue to work, despite the announcement of his shock departure from National League Ebbsfleet United last weekend.

Varney’s exit at one week's public notice from the north Kent club, where he had been executive vice-chairman for the last five years, led to widespread speculation that he might be set to return to The Valley, where he had three spells on the board between 1997 and 2012.

With Charlton having already confirmed the club is in takeover talks, Fleet attempted to dampen the speculation by tweeting in response to enquiries from fans “that there is no future involvement with CAFC”.

However, that in turn fuelled fears about Varney’s health among friends who knew he had undergone a recent cancer operation.

The 63-year-old previously attempted to introduce a potential buyer to Addicks owner Roland Duchatelet between the summer of 2015 and the summer of 2016, but attempts to set up meetings with or about the investor were repeatedly obstructed by then chief executive Katrien Meire.

Writing in this weekend’s Ebbsfleet programme for their FA Trophy match with Warrington Town at Stonebridge Road – recently rebranded the Kufflink Stadium – which is his final game in charge, Varney responds in detail to the speculation from fans of both clubs.

He says: “I have not been sacked. It is my sole decision to leave at this time after five years at the club, which I believe is the right time for all concerned.

“I have fully recovered from my prostate cancer operation last September which kept me at home for three weeks and I have the all-clear thanks to the skill of the brilliant surgical team at Guy’s Hospital.

“I am not representing or involved with any buyer looking to acquire Charlton Athletic FC.

“A couple of years ago I was asked to broker a meeting with an overseas investor I had met on several occasions who was looking to invest up to £100m into the club, but the owner declined to take up an offer to meet me and the investor either in Belgium or London, accusing me of being a billboard salesman and a middleman (for the record I never sought a penny from him for the introduction, by the way) which was insulting from someone I had never met.

He adds: “I am not retiring due to old age. I would like to carrying on working as long as I can. My wife is dreading having me anywhere near the house for fear I will start reorganising things!”

Verbatim exchanges published this week by fans who secretly recorded a conversation with Duchatelet in August show the Charlton owner claiming Varney’s investor was a Kuwaiti who wanted to move the club from The Valley.

However, Varney has consistently said that Duchatelet does not know the identity of the investor because no meeting ever took place and, privately, that the Belgian’s supposed informant does not know either.

He threatened legal action against Meire when she inserted the claim his approach involved a move from The Valley into a press conference to announce Russell Slade’s appointment as manager in June 2016.

No further action was subsequently taken after lawyers advised him that it would be difficult to prove damage to his reputation because message board comments showed Charlton fans did not believe Meire.

In another SE7 takeover development, Voice of The Valley has now received confirmation that ex-Rangers director Donald Muir, pictured in the directors’ box at the Oldham Athletic game last weekend and involved with a consortium that also includes ex-Scotland boss Alex McLeish, is a former Charlton season-ticket holder.

We revealed on Wednesday that he was known to have been a regular attender in the early 2000s.