Not quite the unsung hero . . . but more than all right 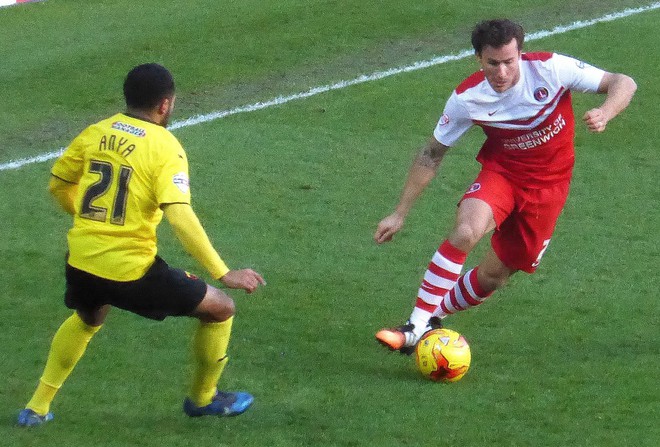 Moving away: Lawrie Wilson on the ball at Watford in January

MATT WRIGHT pays tribute to Lawrie Wilson, one of a number of senior players whose contract has not been renewed this summer

When it comes to scenarios likely to get Charlton fans irate, the departure of Lawrie Wilson is a long way behind Kevin Muscat returning to Millwall as manager and steering them away from relegation, or Alan Pardew signing Jermain Defoe to fire Crystal Palace to qualification for Europe.
There was therefore an unsurprising lack of fuss when Wilson switched to Rotherham United in mid-March, even though the fact the contract of the defender-cum-midfielder runs out at the end of the season meant we were unlikely to see him again in a Charlton shirt.
There was a similar absence of fanfare when he was recruited by then manager Chris Powell from Stevenage in July 2012.
Indeed, the £400,000 deal for Wilson was only made possible by Stevenage agreeing to defer payment of the fee, just as Tottenham Hotspur did for goalkeeper David Button, the only other capture for cash that summer.
Both signings were perceived as strange by supporters; Charlton already had keepers Ben Hamer and John Sullivan, and did the club really require a new right-back when that position was occupied by player of the year Chris Solly?
This view was reinforced by Wilson’s slow start in SE7, which saw him forced to wait until late September to make his first league start, which was only made possible because an injury to Rhoys Wiggins meant Solly was required on the left.
Then, when he eventually came good – such as his impressive two goals against Brighton & Hove Albion on Boxing Day 2013, or his role in the defence that helped stave off relegation in the final months of 2013/14 – even the chant fans came up with in his honour was largely a veiled insult: “He used to be shite, but now he’s all right; walking in a Wilson wonderland.”
Although he reacted to that with typically good humour, even using the phrase as his biography on his Twitter profile, Wilson deserved better.
Happiest when using his strength and energy to maraud forward and supply crosses from the byline, Wilson’s second season, when he played in 49 games, was such a success that the long-term absence through injury of Solly was barely noticeable. This was recognised when he was voted runner-up to player of the year Diego Poyet – but Wilson brought much more to the team than reliability when acting as Solly’s stand-in.
When Powell took over as manager, he set about rooting out those players he felt didn’t understand what it meant to represent Charlton, or weren’t prepared to produce the effort demanded of them.
At every opportunity, he made clear he wanted to foster a close-knit squad that was able to once again connect with supporters.
A former Charlton academy player, and winner of the Premier Reserve League with the Addicks in 2004/05, Wilson was made to measure for this policy.
Indeed, his commitment to the cause, not to mention his willingness to perform a role that might not necessarily suit him in order that the team should benefit, earned him huge respect at Sparrows Lane and in the stands that perhaps exceeded his contribution on the pitch.
With the 27-year-old only offered the chance to impress in dribs and drabs this season by head coaches Bob Peeters and Guy Luzon, it was no surprise when, like fellow recent stalwart Michael Morrison, he was forced to move to reignite his career.
Tellingly, for a player on the first-team fringes, Wilson left with generally fond wishes from fans.
And although he helped condemn Millwall to the drop as he attempted to escape relegation for the second year in a row, he definitely deserved better than having to work under Steve Evans.

This is an edited version of an article that appeared in VOTV119.