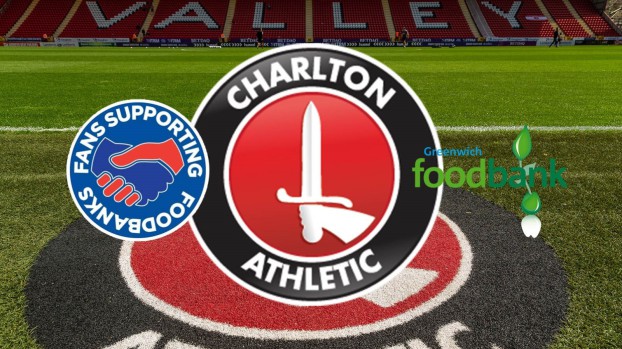 A keen Charlton supporter is calling on other fans to help feed struggling local families this Christmas by donating non-perishable food items at the next two home games, writes Rick Everitt

Sam Spong, who played for the club’s academy as a schoolboy and has followed the team since 1998, when he was four, is the driving force behind the Fans for Foodbanks plan to park a van in the west stand car park on consecutive Saturdays to receive contributions.

Now he is hoping his fellow Addicks will enter into the festive spirit by helping out.

He told VOTV: “I have followed Charlton home and away throughout my life and held a season ticket in the east stand for over 10 years. Throughout my life I attended the community courses Charlton put on during the school holidays and weekends so I very much believe the club is in my blood.

"I came across a video of Liverpool fans pulling off a really successful food bank drive last month and thought Charlton, given their long-standing community work, would be receptive to the idea. I wasn't wrong and they have been excellent from the minute I got in touch.”

The club confirmed its support for the initiative in a story on its website on December 3rd and Sam subsequently contacted VOTV to ask us to encourage fans to get involved. Items collected will be donated to Greenwich Foodbank, which operates eight food banks across the borough.

Sam said: “The aim is to utilise the collective power of football fans to help vulnerable local residents get through Christmas. The fact the two games are against AFC Wimbledon and Gillingham which is great because they are two local clubs and I have already had a response that they will get involved.

The food donated is only made available to people who have been issued with a food voucher by a referring organisation, such as a Citizens Advice Bureau, children’s centre or health visitor.

Greenwich Foodbank, which is a registered charity run in partnership with local churches,  provides a weekly “welcome centre” in Blackheath, East Greenwich, Eltham, Kidbrooke, Plumstead, Thamesmead and Woolwich, where the vouchers can be used. It says that last year it issued 6,433 three-day emergency food supplies to people in crisis.

Greenwich currently has the third highest proportion of unemployed residents of any London borough, although in-work poverty is an increasingly serious problem. More than 20 per cent of employed residents in the borough are paid below the London living wage, according to Trust for London, an independent charity.