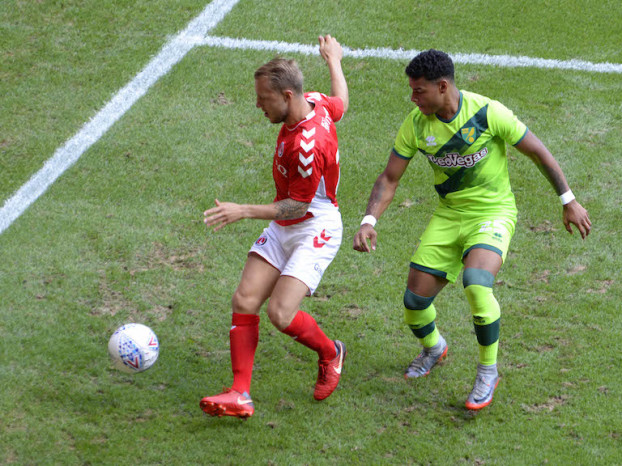 Feeling green? You can blame Norwich for a lot

If Charlton fans ever needed a prompt to ponder the club’s generally dismal fortunes since being relegated from the Premier League in 2007, Norwich City’s arrival on Sunday in the FA Cup third round provides just that. The Canaries may be battling to avoid a sixth relegation in their ten seasons of top-flight football since 1992, but the contrast with the Addicks’ situation is especially stark. For just over a dozen years ago, the two clubs' fates were locked together. There was nothing really between them in terms of size. Now Norwich return as the first Premier League visitors to The Valley in a competitive match since 2007. And it’s arguable that they inadvertently delivered the blow that condemned us to the present purgatory.

In short, if you're feeling green ahead of this game, it's probably not just because the pie you had for lunch wasn't from a recipe by Norwich co-owner Delia Smith.

Before we get to that, however, let’s hold our noses and briefly recall the almost unadulterated misery that was the 2008/09 season, which saw the Addicks slide into League One for the first time in 28 years, despite the benefit of a Premier League parachute payment. Alan Pardew had been sacked as manager towards the end of November with the team 22nd in the Championship.

His assistant Phil Parkinson replaced him, initially on a caretaker basis, and despite failing to win any of first eight matches in charge, drawing three and losing five, was then handed the position on a permanent basis on New Year’s Eve. One of those defeats came at Carrow Road, 1-0 on December 20th. More significantly, the Canaries arrived at The Valley on January 3rd for an FA Cup third-round tie, Parkinson’s first game in permanent charge.

A crowd of 12,615 – including 3,171 from Norwich – saw 16-year-old Jonjo Shelvey fire the home side into a 20th-minute lead with his first senior goal, before substitute Arturo Lupoli equalised on 71 minutes to force a replay. There was just time for Parkinson to oversee another defeat, 2-0 at home to Nottingham Forest, and the Addicks’ 18th game without a win, before the replay ten days later.

Charlton were five points adrift at the bottom of the Championship by then and it’s a mark of how low the bar was now set that there was little expectation of progress in the competition, despite Norwich being only three places better off in the table. Only 415 Addicks bothered to travel. However, a Darren Ambrose strike six minutes into the game defied predictions and provided a rare moment of glee in that bleak midwinter.

It wasn’t a turning point. Parkinson’s side went down 4-1 at Sheffield Wednesday the following weekend and out the cup at Sheffield United a week later. They were long relegated by the time Norwich arrived in SE7 for the final game of the season, clinging on desperately to their own survival hopes, which required Barnsley to lose at Plymouth Argyle as well as their own success at The Valley.

Bryan Gunn had replaced Glenn Roeder as caretaker manager by then, but there would be no reprieve as Charlton stormed into a 3-0 lead by the half-hour mark with goals from Nicky Bailey and two from Deon Burton, despite being forced by an injury to Darren Ward to give a 14th-minute senior debut to 18-year-old Chris Solly. Norwich did pull one back on the stroke of half-time through Alan Lee, but Burton completed his hat-trick on 51 minutes and Sammy Clingan’s free-kick just after the hour provided only a footnote.

So, Charlton and Norwich were both relegated to League One, together with a third former Premier League club, Southampton. Saints included, incidentally, former and future Addick Jason Euell in their ranks, alongside his eventual Valley teammate Bradley Wright-Phillips.  Barnsley won at Plymouth anyway, but for Charlton fans the Valley game was an enjoyable if ultimately meaningless romp.

That would be far from the case when the two teams met the following season. Not only were the two games among the highlights of the campaign, but they proved decisive in more ways than one. Charlton had won their first six matches in League One and then drawn at home to Southampton when they went to Carrow Road as leaders in September.

The travelling support had quadrupled since January and their team stormed into a two-goal lead, Burton opening the scoring with a diving header from a Shelvey free-kick and then the provider turning scorer to head home Lloyd Sam’s right-wing cross, before Wes Hoolahan pulled one back on the stroke of half-time.

It was Rob Elliot who was the start of the show, however, pulling off a string of saves in a frenetic second half, before he was finally beaten in stoppage time by Grant Holt’s controversial equaliser, which most in the travelling contingent viewed as a foul on the Charlton goalkeeper. Latest Norwich boss Paul Lambert naturally didn’t agree. He had taken over after his Colchester United side mauled the Canaries 7-1 at home on the opening day.

By the time the teams faced off at The Valley in April, the table had turned. Charlton were now fourth and Norwich had a seven-point advantage over third-placed Millwall. Just as they had gone down at The Valley they would now secure promotion there too, which was to become an all-too familiar spectacle for Addicks fans in years to come, but not before a gargantuan struggle in which City keeper Fraser Forster was the star man. The home side had 68% of the possession and nine shots to Norwich’s two, of which seven were on target. The Addicks also forced nine corners to the Canaries’ one, but it was to no avail as Michael Nelson headed the only goal from his side’s solitary flagkick on 34 minutes.

"I thought we couldn't have done much more to win,” admitted Parkinson afterwards. "We dominated the game for long periods and did everything but put the ball in the back of the net. I couldn’t ask for any more from the lads."

It was fair comment. Millwall’s 1-0 defeat at Huddersfield Town on the Friday handed Norwich promotion, while second-placed Leeds United’s surprising 3-2 loss at Gillingham effectively made them champions. Charlton suffered a critical blow by drawing 1-1 at relegation-threatened Exeter City the following week, then finished strongly by defeating Leeds, in another classic struggle, and Oldham Athletic at Boundary Park on an afternoon when glimmering hope of automatic promotion flickered briefly but was finally extinguished.

As no one needs reminding, the Addicks were defeated on penalties in the play-off semi-final by Swindon Town, who in turn lost to Millwall in the final. It would be two more years before Chris Powell led the Addicks to the League One title. Arguably, that was a season worth waiting for, but the delay was crucial and here’s why Norwich mattered so much.

Failure to return to the Championship in 2010 caused the old board of directors, led by Richard Murray, to disintegrate. It had been badly split since early 2008, when Derek Chappell removed Murray from the chair of the plc with the unanimous support of his colleagues, which also led to the resignation of chief executive Peter Varney.

However, in 2009, the directors, including Murray, had clubbed together to inject £7m in one last effort at stabilising the club. Many of them were barely on speaking terms with him by then, but after the play-off defeat of 2010 the money, and patience, had run out. They all wrote off the rest of their debts, together with the notional value of shares held by fans, and left Murray to sell the club on, which he did on December 31st to Tony Jimenez and Michael Slater, although it turned out to be a bit more complicated than that.

All the ownership travails of the last decade flow from that sale. Jimenez and Slater’s lack of funds begat Roland Duchatelet, in early 2014, and his arrogance, stubbornness and stupidity handed the club to East Street Investments in 2020. But if Charlton had been promoted in 2010, the club would have been boosted by the significant Championship TV income. It probably wouldn’t have broken even the following year, as Murray claimed, but it would have had a value, and a chance. Instead, the assets, including The Valley and Sparrows Lane, were handed over to a series of chancers and fools because the money ran out that December.

Why are Norwich so significant in this? It’s true there were other opportunities to secure vital points, including a 4-4 draw with Millwall in December. Every season is full of ifs and buts. But we can say categorically that losing to Swindon in that 2010 shoot-out was not decisive, because it would only have led on to another game against the Spanners. We know the script for them. Had Charlton beaten Norwich, however, with just three League Ones games to go, the extra points would have been enough to secure automatic promotion. What’s more, Parkinson’s side were so close to winning the game. A year later, Norwich were back in the Premier League. Southampton followed.

It’s unquestionable that Charlton’s decline had begun by 2006, but this was a fork in the road. There was no inevitability about Norwich or Southampton’s recovery, but not Charlton’s. Better luck – and better ownership – could have had a very different outcome. Norwich, in particular, have been well run and it's hard to feel anything but respect for them as a club. While there are noises in Norfolk now about a lack of investment, we’d happily swap their subsequent fortunes for our own. It’s not a club, historically, that Charlton fans would have envied or thought bigger than ourselves. But here we are losing home league matches to Wycombe Wanderers, Accrington Stanley and Cheltenham Town. It hurts, and it should.

There would be one more memorable trip to Carrow Road (we can discount the 4-1 League Cup defeat there in 2017). On a late September evening in 2014, a side briefly managed by Bob Peeters - remember him? - was battered over 90 minutes by the early league leaders, despite being unbeaten themselves. The home side mustered 15 shots to Charlton’s four, but this time it was the Addicks who had the last laugh. It came in the 86th minute and was scored, from 25 yards, by one Johnnie Jackson.

That was a gleeful journey home, as I recall. In reality, however, a chasm had already opened between the two clubs. So, can Jackson now bridge it again?