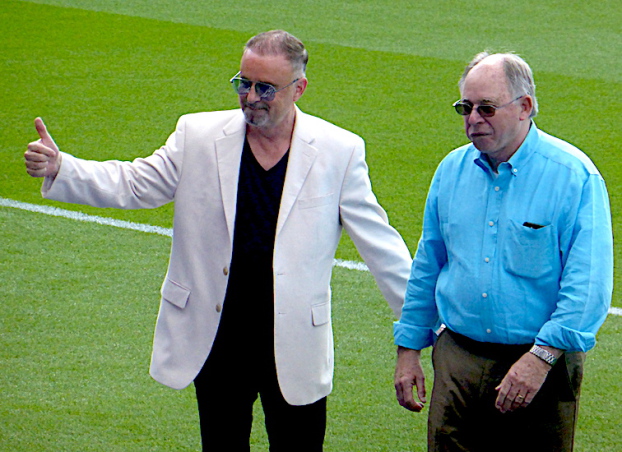 Sandgaard is left looking like a man with no plan

There will be very few people looking enviously at Liz Truss’s popularity ratings right now, but Thomas Sandgaard might just be one of them. Like the beleaguered prime minister, the Charlton owner’s credibility has been left in tatters by early failure and the lack of a persuasive plan to get his regime back on track. Like her, his attempts to shift the blame on to others have proven unsuccessful.

And as with Truss, there are people willing to replace him. Voice of The Valley is aware of a new interested party with access to funds to relieve the US businessman of the liabilities and buy back the ground. However, the current owners remain an obstacle to progress. It isn't going to happen yet and, after everything fans have been through in the last decade, scepticism is bound to attend any further takeover.

Sandgaard’s immediate difficulties have been eased by Charlton’s entertaining 4-2 win over Exeter City on Tuesday night. That has lifted the team into a mid-table position which looks more representative of their performances since July. But the ankle injury sustained by 18-year-old Miles Leaburn, an important contributor to the midweek success, only served to highlight the inadequacy of the club’s summer transfer-window recruitment. Playing with Jayden Stockley as a lone central forward in the opening months of the season has been generally regarded as one of the main causes of new manager Ben Garner’s problems.

While most Charlton fans will naturally always focus mainly on results, it is broader developments that have helped turn the public mood decisively against Sandgaard, just two years after he was greeted as a hero for expelling East Sreet Investments.

On Saturday the club issued an academy update that appeared to be a direct response to stories emanating from within its own ranks about budget cuts, kit shortages and coaches having to cover more than one age group. In the process, Charlton admitted for the first time via their own platforms that the club had failed in Sandgaard’s flagship bid to achieve category one status for the academy earlier this year – something that had had been widely known and reported elsewhere for months. One reason for that omission is likely to be that such expenditure at the training ground, beneficial though it may be, looks the wrong priority when the team remains some distance from returning to the Championship and no transfer fees were paid over the summer, despite almost £2m coming in.

Sandgaard himself has refocused on breaking even in League One, which is likely to prove impossible unless it is underpinned by the early sale of any promising player who emerges from the academy. For Mason Burstow last January, read Leaburn now. That in turn is unlikely to excite supporters or attract them to matches, which makes the challenge of increasing commercial revenues even more difficult. With just 6,000 home fans in the ground against Exeter, the owner has already marked the 30th anniversary of the return to The Valley by reducing league support to levels last seen in SE7 in 1993-94.

Fans inevitably responded badly to a 26% increase in the cost of the most popular adult tickets by staying away, but damage was also done to the season-ticket base by giving away tens of thousands of largely unused match tickets last season. More importantly, the football hasn’t lived up to the expectations that Sandgaard himself encouraged. While the more extreme match prices have been reduced until the end of 2022, even with the games already on sale, the damage has already been done.

Selling players to cover the considerable gap between operating revenue and expenses is not new, of course. Charlton’s books show a trading profit of £33m on transfers from 2016-2021, including £5.6m under Sandgaard in 2020/21. We know that the club banked another £2m in the summer of 2022 from the recently published accounts of holding company Clear Ocean Capital, having broadly broken even on player deals in 2021/22, according to the football company accounts.

Sandgaard himself had lent the club £12m via Clear Ocean Capital as of the end of March this year, having paid ESI another £1.1m to take it over in September 2020. He has now put £16m into the holding company, which also includes the women's team business. The criticism of him, as with his substantive predecessor Roland Duchatelet, is that he dispensed his initial largesse badly, paying fees for players who have proven poor value.

Whether his pockets are deep enough to continue to fund the losses, even if he chose to do so, is now a key question. However, it should be noted that prior to 2020/21 these included a substantial figure for depreciation of fixed assets (largely the buildings at The Valley), which while necessary to meet reporting regulations did not actually have to be found in cash each year.

When Sandgaard transferred the ownership of these leasehold improvements to Duchatelet as part of his takeover deal, he also removed an element of depreciation – perhaps as much £1.5m or £2m – from the reported annual loss. Instead there is a dilapidations provision of £130,000 in the accounts to make good at the end of the leases.

The removal of the annual depreciation charge doesn’t change the actual funding requirement for the owner, but it may allow Sandgaard to claim he has closed the operating loss by more than the savings he is likely to be able to achieve by salami-slicing budgets in all areas of the club, including the playing side.

Without player sales, however, breaking even looks wildly unrealistic. The club still lost £30m between 2016 and 2021 even after the profit on player trading.

There was an £11.9m gap between operating revenue and expenses in 2018/19, which is the last normal League One season in which the Addicks participated for which figures are available. That figure is likely to be lower now, but Charlton could have wiped their entire salary bill – including players, management, academy and non-football staff - and they still would not have broken even operationally, despite reaching and winning the play-off final that year.

While this is obviously unsustainable without external investment, and Duchatelet’s tenure had exacerbated the losses, Sandgaard has blamed previous poor management going back at least two decades for the current situation. In practice, it is strongly arguable that the majority of the problem is structural and rooted in the game’s own financial contradictions, and therefore can no more be changed by him than it could by the more diligent past boards of directors.

It’s also hard to see how previous boards going back 20 years or more can be blamed for the current shortcomings on the playing side or own goals like ticket pricing. The facts are that results have got worse and prices have been hiked on his watch. The main benefit of his tenure to date has been the resource put into CharltonTV, which is widely enjoyed, but even that must be attached to a dubious business case given the threat it poses to ticket sales.

Sandgaard’s claims that he can double or treble revenue in League One are an echo of Truss’s reliance on heroic assumptions of growth in the economy to fund public services and cuts in the rate of tax. His boasts have also been privately decried by one football finance expert who has looked at the detail. The latter commented that the Charlton owner’s revenue projection in League One was on a par with Norwich City’s in the Championship and therefore ridiculous.

Further indications that things are far from well at The Valley have come from the unprecedented extent of internal leaking against the owner – often using pseudonymous Twitter accounts - and an unusually heavy turnover of staff. Notably the club has ceased to publish a non-football staff list either on its website or in the Valley Review, with even heads of departments that fans might need to contact omitted, presumably in an effort to conceal the inner turmoil.

Sacking the popular and long-serving Olly Groome from the communications team was never likely to escape wider attention, however. The abrupt and apparently callous execution of that move further reduced residual goodwill towards Sandgaard, but Groome joins a long list of staff who have left or been forced out in 2022. Even at senior levels, as with commercial director Wayne Mumford and chief operating officer Brian Jokat, who lasted six weeks, the club publicly ignores their departure despite having previously trumpeted their arrival and credentials.

Others like long-serving senior analyst Brett Shaw, who had worked with managers back to Chris Powell, have also been bundled out the door without public acknowledgement, perhaps because it would have encouraged more discussion about the suitability of Thomas’s son, Martin Sandgaard, for the role of “director of analysis” at Sparrows Lane.

There are also questions about the legitimacy of Thomas’s partner Raelynn Maloney’s interventions with staff at The Valley - she features at the top of a leaked staff structure chart – and the handling of senior manager Tony Keohane, the subject of persistent bullying allegations which the club is accused of failing to act upon. Sandgaard has defended Keohane (see below), blaming "personality types" for their response to him.

It is telling that there is no obvious answer – beyond the US-based owner – to the issue of who is in charge at The Valley on a day-to-day basis. That is not a recipe for effective administration or staff accountability, even if it saves a salary.

Having appointed a fourth first-team manager in 15 months over the summer, Sandgaard can hardly afford to make another change in that area and must hope that the team can eke out enough results to climb the table during the remainder of the autumn. Whatever his own merits, former Swindon Town boss Garner has hardly been equipped to succeed, but even if he does improve on last season’s 13th-place finish that is unlikely to be enough on its own to reverse the sense of a club locked in a spiral of decline under the current owner.

The swaggering Sandgaard of 2020 and 2021 has largely gone into hiding, notwithstanding his appearance in front of away fans at Wycombe Wanderers just before the transfer deadline. But no amount of bluster could conceal that he has failed to deliver on his promises and now has no credible plan to move forward.

As the poet Stevie Smith described, he was not waving but drowning – even if he didn’t know it yet. A life jacket is surely needed.

That’s another thing he has in common with Liz Truss. And both may now be gone sooner than they could ever have expected.