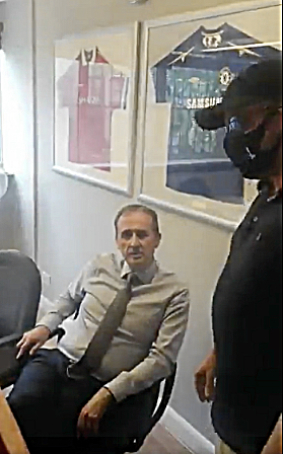 An Airman's quick guide to the continuing chaos

The Charlton saga took a new twist on Friday afternoon (August 7th) when the EFL announced it had rejected three individuals associated with the club under its owners’ and directors’ test, writes RICK EVERITT. For many observers, including much of the media, the club’s ownership shenanigans have become fiendishly complicated.

The EFL announced that “three individuals were subject to a disqualifying condition and the EFL declined to approve their applications” under the owners’ and directors’ test. The trio are Paul Elliott, who the club announced on June 10th would be its new chairman, and two individuals who were appointed at directors of club owners East Street Investments on April 6th: lawyer Chris Farnell and Andrei Mihal, who is the brother of ESI and Charlton director Marian Mihail.

What does this mean?

In Andrei Mihail’s case it is likely to mean very little; the assumption is that he joined the ESI board to help weight it against minority shareholder Matt Southall. It is reported that Mihail has now resigned. Chris Farnell’s position is more complicated. He had previously said that he would resign from ESI as soon as the takeover was complete, but he has also said that he is currently involved in funding the club, alongside Elliott. He is clearly at the centre of much that has gone on around Charlton since March, including attending the behind-closed-doors matches alongside Elliott and appearing in the media, so the EFL’s rejection of a practising solicitor – implying that he is not “fit and proper” to be involved with the club - is striking. Elliott has been put forward by Farnell as the Manchester businessman who is buying the club, but there is considerable scepticism about his wealth and his motives, given that he has no previous attachment to Charlton or known interest in football. Elliott claims it is a "business decision" but from a football perspective that doesn't seem to stack up.

So, who owns the club now?

The June “takeover” of ESI was contractually contingent on EFL approval. The shares have not been transferred, despite misleading statements emanating from the club at the time. Companies House records confirm that Abu Dhabi-based Panorama Magic Ltd (65%) and Southall (35%) continue to own the club, although since Panorama’s Tahnoon Nimer fell out with Southall in March, the latter has been removed from day-to-day involvement and is no longer a Charlton director.

Nimer, meanwhile, is represented on the board by two more Romanians, Marian Mihail and Claudiu Florica, both of whom have passed the owners’ and directors’ test. So did Nimer, but he and Southall were never able to pass the second part, which is to prove source and sufficiency of funds to at least complete next season. So neither the January ESI nor its revised April make-up have been approved by the EFL. And now the figurehead in its latest incarnation has been personally disqualified by the EFL.

Is anyone else involved?

Apparently! The latest statement also says that “the EFL continues to consider other applications from other indivduals…” Given that all the current ESI and Charlton directors have been approved or denied, that means there are at least two names we have not explicity been given. It’s likely one is an Egyptian called Mohamed El Kashashy, who also appeared at least once at the behind-closed-doors Charlton matches in June and July. It was confirmed then by Farnell that he was part of the “consortium”.

Another might be Dave Jones, the former Southampton, Wolverhampton Wanderers and Cardiff City manager, who was found in Farnell’s office on Friday afternoon by "visiting" Charlton fans. Jones was involved with expelled Bury last summer, as was Farnell, and Voice of The Valley has now been told that he was also associated with ex-Swansea City chairman Huw Jenkins’ aborted interest in buying the club at the end of May/early June. However, there is no confirmation these two have been put forward – or obvious reason why ESI is concealing the identity of other individuals submitted to run the club.

What has Farnell said?

Not much, for once. The club issued a one-sentence statement on Friday evening, confirming that it would be appealing on behalf of two individuals, who will be Elliott and Farnell. However, the EFL will have priced in the likelihood of an appeal and worse when making their decision, which in Farnell’s case had presumably taken them four months. They will certainly have been keen to make sure it was legally robust. According to a report in the Sun by Alan Nixon, who appears to have an open line of communication to Farnell, Elliott “plans to go to the High Court to fight the decision”.

The EFL appears to have stepped in to block Charlton from signing Conor Washington from Hearts and Alex Gilbey from MK Dons. In fact, the club now appears to be unable to sign any senior players.* Nixon has tried to make a positive story out of the addition of Australian Matt Dench, but he is 16 and unlikely to be of much immediate use to manager Lee Bowyer. The latter will have wanted to see clear evidence that the new regime could move the club forward but has instead been presented with the polar opposite. On the other hand, the EFL decision potentially moves the ownership saga on.

Another anomaly is that it is has been reported that the EFL notified Roland Duchatelet of the tightening of the transfer embargo. Yet Duchatelet has no known say in the running of the club and has so far refused to negotiate with potential buyers on that basis. However, VOTV has been told that his point man Lieven De Turck was involved in an emergency senior management meeting on Friday afternoon, so the developments may have his attention.

Meanwhile, Farnell is the subject of a complaint to the Solicitors Regulation Authority by Charlton supporter Dan Sayer, alleging he has a conflict of interest in his involvement with various parties to the attempted sale of ESI. The SRA has found that there is sufficient merit to this for it to begin an investigation.

What about Peter Varney and Andrew Barclay?

They are interested spectators at this stage, but even if Elliott and Farnell remain barred and nobody else emerges to front the latest takeover and it falls there are further obstacles to them stepping in. Nimer is understood to want compensation for selling the football company to them and it remains encumbered with a commitment to buy the freehold land from Duchatelet for an outlandish £50m within five years. In addition, there is no certainty about what other legal commitments the current ESI has made for the club which could be enforceable by the courts. Elliott and Farnell claim to have helped fund the club since May, but it’s unlikely this was unsecured investment and Laurence Bassini, the formerly disqualified ex-Watford owner, is among a number of individuals claiming to be owed money. In short, nobody could be certain what they were buying.

And the three ex-directors?

They continue to correspond with the parties and can play a benign role in getting the club back on track, which is part of their motivation, but they have still to seek the injunction that would oblige the courts to rule on whether their charges on the assets were breached in the January sale by Duchatelet and force the parties to pay up or undo the deal. One reason is that four of the seven have so far shown no appetite to contribute to the costs.

Is administration the answer?

It could be because all existing commitments, including those to Duchatelet, would disappear in the effort to create a viable future. The club’s tenure at The Valley might also become uncertain, but the council leadership in Greenwich would be a reliable ally in the fight to prevent any redevelopment such as that touted in a risible investment offer document that came into the public domain this week.

Without a tenant, Duchatelet would risk being left to meet the fixed operating costs of the stadium and the training ground, for example business rates and security. He is also on the hook for any unmet balance of the £7m due to the former directors, which becomes payable on an insolvency event, as it is secured over the companies he still owns. For that reason, he is likely to be very keen to avoid the football club falling into administration.

Duchatelet does have a £50m guarantee from Nimer, but his chances of redeeming it are slim. ESI would be wiped out in administration, but there are no guarantees that Varney/Barclay would be the ones to take over as the asking price would then be much lower. And Duchatelet doesn’t have to sell the new owner The Valley or Sparrows Lane at all if they emerge from administration.

Are Charlton likely to be expelled?

Probably not, because the EFL has plenty of discretion, knows there are viable owners available and won’t want to take the political heat after Bury. However, it noted in a statement on July 27th that: “It remains the responsibility of the club and any prospective owner(s) to demonstrate that the requirements of the EFL regulations are met. The club is aware of the consequences of not meeting those requirements.”

Unhelpfully, it didn’t choose to spell them out to fans, but it appears the immediate consequence was a tighter transfer ban. In an internal note to staff posted on the club website on July 31st, club secretary Chris Parkes claimed of that week’s Zoom meeting with the EFL: “I can confirm there was not one mention of the club being expelled from the league. I know some people have compared our position to the sad situation at Bury but this is a completely different set of circumstances.” Unfortunately, Parkes also said: “By my reckoning the new ownership will be approved.”

It’s unclear what ESI, in whatever incarnation, gets from hanging on, as salary caps or not the club can be expected to lose £5m-£10m in League One due to dramatically reduced revenue, and potentially more. The only obvious benefit to Elliott was to sell the club on to somebody who wants to own it, yet Varney reports that co-operation from Farnell has been minimal. The proposed deals for Washington and Gilbey seemed to suggest more enduring intentions, but in January Southall previously brought forward transfer deals that he had no chance of completing and misled fans about the prospect of signings.

Some fans have taken encouragement from the triggering of contract extensions by Ben Amos, Jake Forster-Caskey and Jonny Williams – and these are certainly good news from a football perspective – but rather than a vote of confidence in the future they look like the individual players protecting their position in a very uncertain employment market. Both Forster-Caskey and Williams have long injury histories, which isn't to say they wouldn't be handy players to have in League One.

Whether Bowyer will be able to put out a respectable team for a season due to start on September 12th is questionable. Will Bowyer even be in charge by then, as he must be close to his own breaking point? He could also face further departures, with bids expected for Dillon Phillips, Alfie Doughty and, potentially, Macauley Bonne. But it’s as clear as mud who will decide whether or not to accept any offers, since it can’t be Elliott or Farnell.

*Gilbey and Washington did subsequently complete deals to join Charlton.

Voice of The Valley issue 160 will be published on or around August 28th.