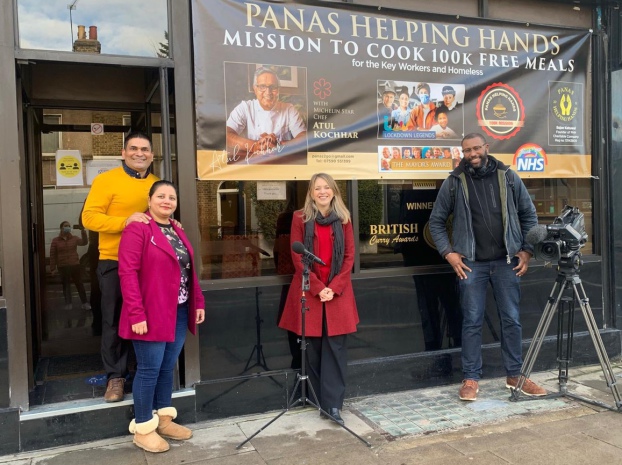 US politics hasn’t been a fertile place for soaring oratory in recent years, but talking to Sujan Katuwal, I was reminded of the words of one of the country’s most famous presidents: "Every time we think we've measured our capacity to reach a challenge, we look up and we're reminded that capacity may well be limitless.”

That those words were spoken by a fictional president, Jed Bartlet, and penned by Oscar-winning screenwriter Aaron Sorkin, creator of the TV programme The West Wing, matters not.

For while the Covid-19 pandemic has resulted in untold suffering and death, those words aptly highlight how tragedy is often matched by an outpouring of generosity and stories of normal people doing extraordinary things.

Among those heroes is Charlton fan Katuwal who, along with his wife Bandana, owns the Nepalese Panas Gurkha restaurant in Lewisham - and is nearing an incredible target of cooking 100,000 free meals for NHS workers and the homeless.

“When we started we had no idea we would come this far,” said Sujan, who although forced to close his restaurant during lockdown has continued to cook for the local community.

Around 97,000 free meals have so far been given out at hospitals, care homes, community centres and homeless projects across Lewisham and Greenwich. Hospital workers have also been given the use of company cars and industrial fridges and thousands of handwipes have been donated to local groups.

“This community means a lot to me,” he said. “From before we started our business, we were welcomed and supported and when the pandemic happened, I felt that this was the time to give back.

“One thing led to another, and the appreciation and thanks we received led to greater motivation to help even more.”

As the death toll has risen and the demand and sacrifices made by health workers and others has increased, so Katuwal has intensified his own efforts, leading to the ambitious plan to give away 100,000 meals and an associated fundraising campaign.

As the country’s focus has shifted to the vaccine rollout, so Panas Gurkha has been supplying food to the army and the teams of staff delivering the life-giving shots.

The efforts have also taken him to The Valley, as a result of Greenwich Council’s health links with the Charlton community trust and its work to help local residents get food and stay connected to key resources. 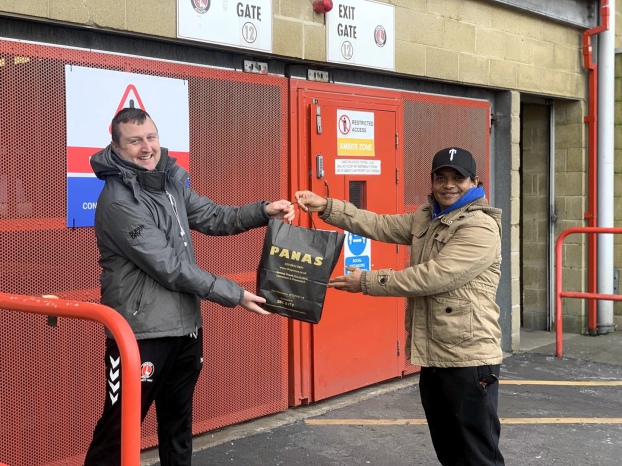 Special delivery: one of the free meals being accepted at The Valley by the Charlton Athletic Community Trust

“When I came to England I lived on Charlton Lane and was a big fan of the club as a boy,” said Sujan, whose team is currently visiting The Valley up to three times a week to donate meals. “When I came and met the Charlton Community Trust for the first time I was blown away by the size of the operation.

“My favourite manager is Alan Curbishley, of course; I felt bad when he left. Those times in the Premier League were a beautiful time and I wish we can go back there.

“We all have our ups and downs in life. We just need to support the team and the club. I still only live 10 or 15 minutes’ walk away, and I want my grandchildren to be fans of the club, never mind my children.”

Having funded much of their work themselves so far, the Katuwala launched a campaign to raise fund for the donations to continue and have received high-profile backing from the likes of actors Joanna Lumley and Sally Lindsay and musician - and Charlton supporter - Steve White.

Panas Gurkha has been shortlisted for the Lewisham Mayor's Award for its response to the pandemic and last year won the Queen’s Award for Voluntary Service.

This showed, says Katuwal, how a few people can make a big difference. “Obviously, I can’t wait for the restaurant to reopen, but the work I’m doing in this area won’t stop.

“Covid has changed me. For the rest of my life I will be serving the community.”

Thanks for the lovely message @drummerwhitey! ?

We’re so close to our target of 100,000 meals and you can support us here: https://t.co/HkEgpNYISB#Lewisham #Greenwich #COVID19 pic.twitter.com/ALQiLTQG4p 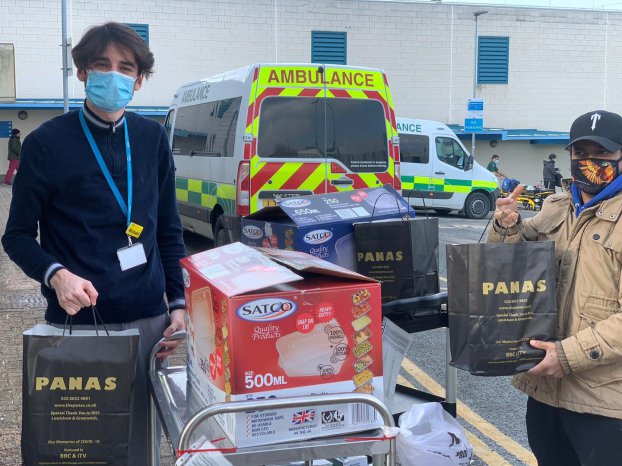 Hospital pass: another day, another delivery for the team from the Panas Gurkha restaurant