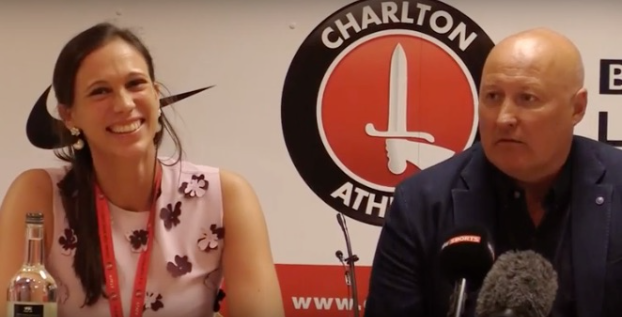 Welcome to the asylum: Meire and Slade at the press conference following the latter's appointment

Slade's a hit but Meire spoils the show again

It should have been a rare day of sunshine in the calamitous Charlton career of chief executive Katrien Meire.

After two and a half years of self-justificatory nonsense, and introducing five foreign head coaches, all of whom she once said had been correct appointments, Meire was finally parading in front of the cameras a plausible and experienced English manager.

Russell Slade arrives with a credible track record, even if his failure to win a single promotion in nearly 20 years of management at Cardiff City, Leyton Orient, Yeovil Town, Grimsby Town and Scarborough means he can hardly be regarded as a high flier.

Cardiff apart, the 55-year-old’s pedigree is solidly lower division and at clubs well beneath Charlton’s recent or historical peers, but he gives every appearance of being likeable and a safe pair of hands at League One level. A three-year contract will also provide him with a level of comfort amid the madness that he will soon discover surrounds him.

The ambiguities around control of recruitment are still there. Slade said he had a “verbal agreement” on this and would have “a huge influence” in “an open kind of discussion”. But as he pointed out, at least he can get other British managers to pick up the phone, which is unlikely to have been reliably true of anyone in authority at the club in the last two years.

For once it might even have been possible simply to smile at Meire’s absurd boast that the club had also appointed a chief scout - as if leaving Phil Chapple’s former position vacant for eight months had been anything other than idiocy in the first place.

With a media minder to her right, all Meire had to do was give tight, appropriate answers and avoid pulling faces when chairman Richard Murray made his inevitable “Can I just say this?” intervention. You can, Richard, but nobody is listening to you any more.

It was Slade’s day not theirs. A metaphorical curtain had been tugged across between the assembled hacks and the corpses of Chris Powell, Bob Peeters, Jose Riga, Guy Luzon and Karel Fraeye. Mistakes were only made “last season”, and didn’t even include the appointment of Fraeye, just his continuation.

But Meire couldn’t do it. She had an important message to get out and she was going to shoehorn it into the discussion somehow.

The moment came when she was called to answer a reasonable but innocuous question about whether the new man and apparent change of approach represented owner Roland Duchatelet’s last shot before selling up.

“As we said in the past the club is not for sale. We had several approaches from alleged buyers before, including the one from Mr Varney, but somebody’s proposal like that includes a move away from The Valley and Roland Duchatelet knows how important it is for the fans that Charlton plays at The Valley,” she burbled.

The answer had little to do with the question, and probably much more to do with Murray seated two places to her left. It was also ludicrous, positioning the Belgian owner – last seen at a Charlton home match in October 2014 – as the defender of the club’s heritage against the lifelong supporter and respected former chief executive Varney.

There was also the significant problem that Varney insists her claim about his proposal isn’t true, as he quickly and forcefully made very clear, demanding she produce evidence or publish a public retraction within 48 hours.

Yet again, Meire had proven unable to keep her mouth shut and had made her own lack of judgement the story.

The prospect of Charlton moving to the Greenwich peninsula has been a recurrent threat for more than a quarter of a century, with discussions between the board and Greenwich council in 1988 and 2000, the latter about the future use of what is now the O2 arena.

The talks in early 2000 were in part a defensive manoeuvre around the potential for another Premier League club to move into the borough.

In the latter part of the last decade the subject came up again when Varney was tasked to attract new owners and construct a viable business plan to bail out the club and reverse the decline that Murray had begun when he appointed Iain Dowie to succeed Alan Curbishley as manager in 2006.

Greenwich Council had its own agenda. Its masterplan for the west side of the peninsula – adopted in 2012 but years in development - included a 40,000 seater stadium, although it was conceived as a venue for concerts that should “ideally be flexible enough to also host sports fixtures”.

Charlton fan Joe Hall then reported in City AM in 2015 that Los Angeles-based Darius Khakshouri was “suing Tony Jimenez and Kevin Cash, who co-owned Charlton from 2011 to 2013, after providing the pair a £1.8m loan to help ease the club's cash flow issues in September 2013 as they searched for a buyer” for the club.

Khakshouri claimed he was talked into the loan on the condition that Charlton would not be sold without a deal being in place to set the club up in a new stadium near the O2, but that was never part of the plan when Duchatelet eventually took over in 2014.

Voice of The Valley had already disclosed in its first issue of the 2013/14 season that Jimenez, together with Charlton chairman and alleged owner Michael Slater, was circulating a document in the City telling potential purchasers that there was an opportunity to relocate the club to the peninsula and that talks with the council about building social housing on the existing ground had already taken place.

However, by that stage there was already little substance to the claims. The Jimenez regime had shown no interest in relocation when taking over on the last day of 2010 and Varney had left club in dispute in 2012. It seemed much more likely the pair were using his previous background work in a desperate attempt to leverage investment.

Nearly three years later, plans for the peninsula have moved on still further, although the privately owned Morden Wharf site identified in the council's plan remains undeveloped, despite the appointment of architects OMA in 2013. The talk since then has been of a much smaller performance area than The Valley, but it wouldn't be a football ground anyway.

And the Charlton context has changed dramatically. While the team has slipped back into League One under Duchatelet and there is extensive and ongoing damage to the club’s supporter base, West Ham United’s move to the Olympic Stadium and Crystal Palace’s tenure in the Premier League have together squeezed the space for the Addicks to regain their former status in the medium term.

The need for Charlton to play at a stadium larger than The Valley is less than obvious, while the financial rewards of television at the top of the game have continued to head into the stratosphere.

More to the point, Varney vehemently denies that a move forms any part of his recent proposal and has threatened to publish recent email exchanges with the Belgians to show what they do and don’t know, thereby hanging Meire out to dry.

Given the gratuitous way in which Meire inserted this claim into the press conference, it’s hard to feel any sympathy for her. Or to avoid the view that she was simply repeating publicly what Murray had told her, which in any case is about as unprofessional as a chief executive could be in that situation.

It should have been a sunshine day but as the afternoon wore on the heavens opened and the sky crackled with lightning. The symbolism was clear. Meire had messed things up again.