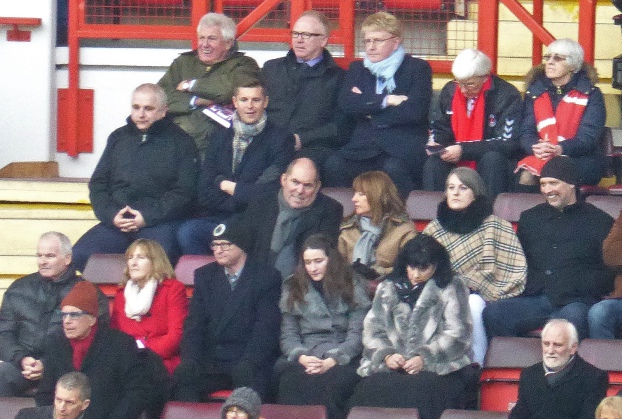 The former Rangers and Scotland manager Alex McLeish has emerged as the high-profile name in a consortium bidding to take over Charlton – after Voice of The Valley first reported his presence in SE7 last Saturday (January 6th) via Twitter.

But we can now exclusively reveal that his companion Donald Muir was also a regular attender at The Valley during the early 2000s, when he was based in London, which may be an additional explanation for his appearance on the Charlton scene.

Our picture of McLeish and Muir in the Charlton directors’ box against Oldham Athletic appeared on the back page of Wednesday’s Daily Record in Scotland above a story reporting their interest in the Addicks.

And McLeish was back at The Valley for Tuesday night’s Checkatrade Trophy exit on penalties to Oxford United – an unlikely choice of fixture for a casual visit - where he sat next to Barnet boss Mark McGhee.

Meanwhile, the club received two visitors at the midweek game from Belgium who declared themselves “guests of the owner” and had earlier been caught on camera being collected from Ebbsfleet International by a member of the Addicks staff.

McLeish, who turns 59 this month, managed Rangers from 2001-2006, taking them to two Scottish title successes, and had ten games in charge of the national team in 2007. He subsequently took over at Birmingham City, Aston Villa and Nottingham Forest, before spells in Belgium and Egypt.

His party were lunch guests of former chairman Richard Murray in the Valley boardroom before the 1-0 win over Oldham. But we can now disclose a further Charlton connection with the weekend Valley visitors.

Attention has also focused on former Rangers director Muir, who sat between McLeish and Addicks club secretary Chris Parkes. It raised concerns among some fans because Muir was associated with the disastrous Ibrox ownership of Craig Whyte. Muir was seen to be Lloyds Bank’s man on the board with a successful mission to cut costs and generally look after the bank’s interests, although he is reported to be a Rangers fan too, as well as a lifelong pal of McLeish.

A history of supporting the Addicks in the Premier League may provide a more benign explanation of his return to The Valley and of his insight into the club.

A Scottish and Canadian chartered accountant, Muir has extensive experience of turning around financially troubled bodies, according to the Financial Times in 2008, including two NHS Trusts and the bank Northern Rock.

He told the FT: “We have to put leadership and discipline quickly back into an ailing organisation and instil logical and commercial thinking,” attributes that Addicks fans may feel have been sorely missing at The Valley over the last four years.

Neither McLeish nor Muir are likely to have the resources to buy and operate Charlton and with owner Roland Duchatelet looking to recover as much as possible of the circa £60m he has laid out, any takeover will need one or more wealthy backers to stand behind it.

In recent weeks there has been a swirl of reports of overseas interested parties, and a Chinese group is understood to have been shown around Sparrows Lane in December. We have also seen firm evidence of other interest, although neither of these parties is believed to have completed its own due diligence on a deal.

Hopes of a takeover rose sharply following news of chief executive Katrien Meire’s departure for Sheffield Wednesday on December 28th, with Duchatelet confirming that he was “currently in talks with various interested parties regarding a potential takeover of the club” and that “it is now likely that the club will change ownership”.

However, Murray’s comments in the official club statement and subsequently in private have appeared to pour cold water on the prospect of an early change of control, despite the increasingly rampant speculation.

Manager Karl Robinson has also vented his frustration at being forced to put his January transfer window plans on hold pending a resolution of the situation.

Donald Muir does have a connection to professional services giant PwC (PricewaterhouseCoopers), having served on its turnaround panel, a list of directors it introduces to distressed businesses.

Although any link is speculative and tenuous, we can now reveal for the first time that PwC was the company leading the due diligence for a prospective buyer of the Addicks in October and November.

We can also name their client for the first time as the North London registered company International Football Corporation, a shell company first registered in 2015 with no trading history and only one named officer.

He is Leonardis Gardikiotis, a Greek-Australian football coach and retired player, who played professionally in Greece and Australia, before moving into management. He was the national coach of Tahiti in the 1999/2000 season.

His Australian background is one reason the full access due diligence was linked to the previously reported interest of the Australian Football Consortium and to the wealthy Australian businessman Andrew Muir, whose interest VOTV revealed in August.

There is no suggestion that Gardikiotis was ever in a position to fund a takeover himself.

However, no substantive link to either AFC or Andrew Muir has ever been established and it has so far proven impossible to establish the identity of anyone else behind the recent due diligence, although there have been hints they are UK based.

Duchatelet's wilingness to give the Gardikiotis due diligence full access to Charlton's books would appear to demonstrate that he had seen proof of funds and believed a deal was feasible, although it could also have been brokered by a trusted third party like Murray.

There was also some evidence of previous due diligence having taken place last spring, which may have been linked to AFC and/or Andrew Muir, who has no known family connection to Donald Muir.

Multiple confirmation of the autumn due diligence process came from sources close to top London law firm Mishcon de Reya, which has been representing the club’s current ownership, as well as a series of supporting leaks from inside and outside The Valley.