The Charlton Men - a novel approach to the Addicks 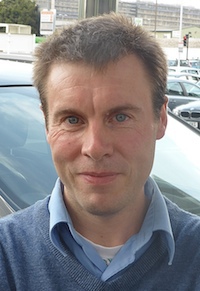 RICK EVERITT finds out about Paul Breen (left), author of the novel The Charlton Men

By an odd coincidence I met Paul Breen the day after Chris Powell had taken charge of Huddersfield for the first time.

The Yorkshire town and the former Valley boss both feature prominently in the 42-year-old Irishman’s first novel, The Charlton Men, which we’d got together over coffee to discuss.

Huddersfield was the first place Breen lived when he came to England in 1999 to study for a teaching degree – and of course the Terriers were among our key promotion rivals in 2011/12.

Powell was the manager who really sparked the author’s enthusiasm for the Addicks after the latter ended up working at the University of Greenwich and bought a house in Charlton.

Breen, who is originally from County Fermanagh, in Northern Ireland, saw his first games at The Valley towards the end of the 2007/08 season, when Alan Pardew was in charge.

Powell made his last 17 League appearances for the club that season. But Breen has no recollection of seeing the club’s first full England international for 36 years in action: “My first awareness of Chris Powell was really through a picture of him above the bar in the Bugle Horn in Charlton Village,” he said.

“Then he became manager in 2011. I’d begun going regularly during the first season in League One under Phil Parkinson, wondering why Jonjo Shelvey wasn’t in the team and then finding him sold. I couldn’t have picked a worse time!”

“The following year was some of the worst football I’ve seen. I missed Powell’s first game in charge against Plymouth, but I really liked the buzz there was suddenly around the place.

“I actually ran into Powell and Alex Dyer at the FA Cup final that year. I had got tickets through work and was amazed to find they were sitting behind me.

“Chris was very quiet but Dyer said hello. I remember thinking that I would be really happy to be back at Wembley the following year for the play-off final.

“Then that summer, when I was getting married, Chris was bringing in all those new players. It seemed like a Roy of the Rovers comic story from the 1980s when the old team had been destroyed in some accident. I really liked the idea of a new team being built from scratch.”

Breen has now used his experiences that season as background to The Charlton Men, although the novel (reviewed overleaf) is about a lot more than the Addicks.

“The ideas for it started in parallel to the 2011/12 season, so it was probably two years between the thought coming into my head and it actually being published,“ he explained. “I was doing a PhD at the time and this was my way of relaxing.

“The plot evolved while I was writing it. It’s a bit of a cliché, but it’s almost not up to you to decide what happens in the end. It’s what the characters are most likely to do.”

Despite the thousands of novels attempted each year, relatively few make it into print.
“Part of the writing process is that you have to doubt what you are doing completely and think it isn’t going to work,” said Breen.

“You have days when you think this isn’t going anywhere and want to throw it in the bin, but somehow you get over it.”

I wondered how conscious he had been of the opportunity to find a market through the Addicks fanbase.

“I was not really conscious of the Charlton angle being a commercial one, because I thought it would have a broader appeal to people from Greenwich and Blackheath,” he said.

“I also thought it would attract fans of other clubs, but I’m not sure if it has done that – possibly fans of Huddersfield. I can see that it goes up in Amazon’s sales rankings when it’s been in the press. But I think the fact it is fiction is both an advantage and a disadvantage in terms of getting publicity.”

He was probably unfortunate in that the mid-summer publication coincided with an unprecedented three other Addicks’ titles, including my own paperback Battle for The Valley.

And with the exception of the News Shopper website and the Greenwich Visitor newspaper, which is partly aimed at the tourist market, he has found it difficult to get exposure in the local media.

In some ways this is surprising, because not only does the club play a central part in his characters’ search for identity and meaning, but the story is also strongly rooted in the area he has made his home.

“My uncle lives in Lewisham, but I’d never really been to the Greenwich and Charlton area before I came to teach at the university in the summer of 2006,” said Breen.

The author was based in Korea at the time, during a peripatetic spell that saw him also take English teaching jobs in Japan and Australia.

Back in the Far East the following winter he began to follow the team via the Korean sports channel: “The club took on a kind of celebrity status over there, with Les Reed succeeding Iain Dowie and then Alan Pardew coming in. Reed was a bit of a figure of fun for the presenter.”

The next summer he returned to the University of Greenwich on a more permanent basis.
He also met his future wife, whose father happened to be a regular at The Valley, helping to cement his new allegiance.

Sitting in the north-west quadrant at the time, although he has since moved to the west stand, Breen was being inducted into the culture of the club and he has used that to inform the relationship his main characters have with Charlton.

Fergus, a Catholic Irish immigrant, is introduced to football at The Valley by Lance, an Afghanistan veteran and committed fan: “The excitement for Lance is in following the team, but for Fergus it’s a bit different. He’s new and he has no experience of English football other than on the radio.

“People in Ireland may follow Liverpool or Manchester United from their armchair, but it’s far better to go to a live game.

“I don’t just go to Charlton. I’ve been to the FA Cup final and the Community Shield, as well as Millwall, Dartford and Welling. So I know what the atmosphere is like at different games.

“Recently, I went to the Manchester City versus Arsenal game. I don’t know if it’s because there is no rivalry between the teams, but I couldn’t sit through that as a neutral. It might as well have been a friendly.”

But while Breen’s own experience of coming to England inevitably feeds into his depiction of the Irishman, he admits that he ended up feeling more empathetic towards Lance.

“I did draw on the immigrant experience with Fergus, although his life’s probably more exciting than mine,” he said.

“What I found weird when I was writing the book is that I ended up being more sympathetic towards Lance, the former soldier. But I guess that’s part of being an author.”

What the novel doesn’t do is exploit the obvious tension between the main characters’ contrasting histories: “That probably wasn’t the book that I wanted to write,” he said. “I’d rather introduce things subtly and let people think about that for themselves rather than preach to them.”

A sequel to The Charlton Men could appear as early as next year, with the eventual possibility of a trilogy. Breen admits that with hindsight Lance should probably have referenced the play-off final exploits of Clive Mendonca and he might look to explore that in future.

However, he points out that drama of 1998 would have contradicted one of the running ideas in the novel, which is that the Addicks always seem to fail at the last. Instead, he leaves the uninitiated reader to wonder if Powell’s team will do so in 2012.

For many of us that season probably had something of a fairytale quality already. Breen’s achievement is to weave another engaging story around the real one, and hopefully his efforts will ultimately be rewarded too.