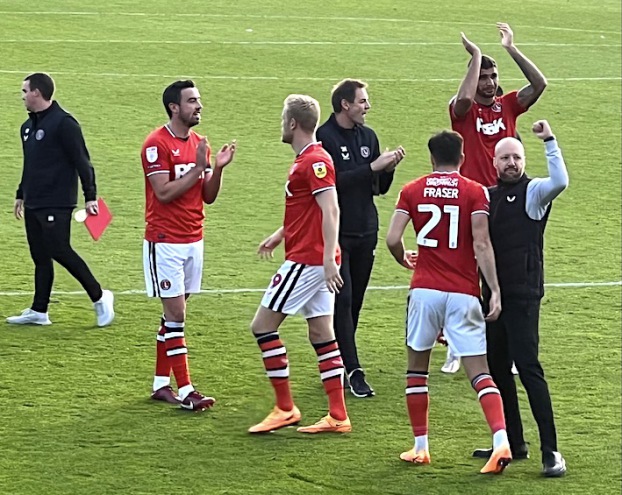 There was finally something to celebrate for travelling Charlton fans on Saturday. The Addicks’ 1-0 victory at Shrewsbury Town was their third win on the bounce. It lifted them to seventh in the League table. However, it’s a measure of their uncertain start to the season that Ben Garner’s side was the last in the third tier to secure an away victory.

Even rock-bottom Milton Keynes Dons, who visit The Valley on Tuesday night, had already managed two away wins. True, Charlton had drawn four of their seven matches on the road and remain unbeaten in SE7, but it’s a big part of why they remain 11 points behind next Saturday’s Floyd Road opponents Ipswich Town in second place.

That gap to the automatic promotion spots could be anything from five to 17 points by next Sunday and a top six place is a realistic possibility, which marks this week’s two home fixtures out as significant on the field. They may also shed some light on the club’s problems off it. The background to that is that Charlton’s home support has been in freefall this season, whatever story the announced numbers have told.

Although the opening home game against Derby County attracted around 11,000 Charlton fans to The Valley, that figure had tumbled to 6,600 by the midweek visit of Forest Green Rovers in September, recovering to 8,000 for the road-and-rail chaos-blighted Saturday fixture with Oxford United. It then fell to a startling 6,000 for the evening kick-off with Exeter City, before edging up to 7,500 for the televised Monday night game with Portsmouth.

It’s fair to point out that many season-ticket holders tend to stay away from evening games in normal circumstances and that there were numerous poor midweek crowds under Roland Duchatelet’s ownership. Nonetheless, these are historically very low turnouts.

The club helpfully announced the actual numbers attending for a period last season, which means we can measure the decline against them. We know, for example, that there were 12,000 Addicks for the home game with Oxford United in March, which was a 4-0 defeat, and 8,200 the following midweek against MK Dons. There were then 9,000 home supporters for Gillingham in midweek and 11,000 and 9,000 for Burton Albion and Lincoln City on Saturday afternoons. It’s clear that there has been a very significant decline this season.

The generally misleading official figures, which include unused complimentary tickets as well as absentee season-ticket holders, confuse the bigger picture. To find as few as 6,000 Addicks fans in the ground, however, you probably have to go back to three dead-rubber home games in the three-sided Valley of April 1993 or an evening game with Bristol City in May 1994.

Bearing in mind that the club is thought to have around 8,000 season-ticket holders and is unlikely to have sold fewer than 1,000 match tickets for any of the recent games, it’s clear that disillusionment is a significant factor in the numbers attending, alongside unrealistic pricing.

Following extensive lobbying the latter has now been addressed to some extent, with the top prices reduced by £4 and further by a three-match offer that is probably too complicated to have a significant bearing on take-up. However, the £3 surcharge for late purchases remains in place. Overall, the pricing structure remains an amateurish mess.

The drop-off in home attendances is likely to be costing the club £30,000-£50,000 a game and undermines the matchday experience for those still in home stands that are under a third full, even if fans present have done their best to create a good atmosphere.

The alternative offer of watching CharltonTV at home may be another factor, especially in midweek, but that was also true last season and we haven’t even reached the colder weather yet. The streaming service contributes some revenue, but with whole families and friends able to share a screen for £10 including VAT that isn’t going to help much.

This week we will learn whether the fans have been persuaded to return in any numbers by the recent turnaround in results. Ipswich, in particular, is traditionally an attractive fixture and a decent atmosphere is guaranteed by a sold-out Jimmy Seed Stand. 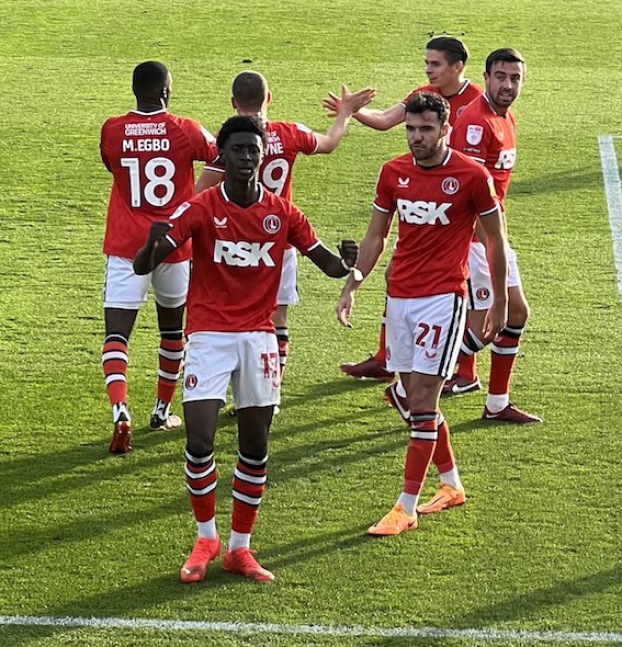 There’s little doubt that the change has been delivered by a tactical switch, with first Miles Leaburn and now Charlie Kirk supporting Jayden Stockley up front, as opposed to the earlier attempts at a 4-3-3 formation, which left Stockley isolated. The Addicks have scored eight times in the last three games – the same goal tally they managed in the previous nine League One fixtures. They would have had more if goalscorer Jes Rak-Sakyi had made better use of three gilt-edged first-half chances at Shrewsbury.

But a tightening of the Charlton defence has also been a factor, with three clean sheets in the last four matches. That was something the team hadn’t previously managed in League One since beating Derby at the beginning of August. The central pairing of Ryan Innis and Eoghan O’Connell has received credit, but the return from injury of full-backs Steven Sessegnon and Mandela Egbo is surely a contributing factor, even if Sean Clare is unlucky to find himself on the substitutes’ bench.

All three recent wins have been an entertaining spectacle, in stark contrast to the dismal goalless draw at Lincoln which preceded them. Shrewsbury featured an exciting full debut for winger Tyreece Campbell, in which he was unlucky not to score, and multiple near misses for both sides. There was also a late cameo for substitute Chuks Aneke, featuring a Hot-Shot Hamish goal attempt which left the home keeper winded but in the cartoon strip would have seen the latter swept into the net along with the ball.

The recent recovery has removed the risk of Garner being sacked – a fate he suffered after a similar run of opening results at Bristol Rovers in 2020/21. Regardless of fairness, winning just two of the opening 12 games will always put a manager’s future in doubt at a club which remains one of the better resourced in the division, despite obvious gaps in the squad.

One note of caution, however, is that a similar turnaround happened a year ago when Johnnie Jackson took over from Nigel Adkins and switched to two upfront. The team won six and drew two of its following nine League One games, but injuries and illness then kicked in and they never found the same consistency again.

While Charlton have two minor home cup matches after Ipswich, they have just two League One fixtures in November, both away from home, and their December 3rd Valley clash with Cheltenham Town has now been brought forward to avoid a potential clash with an England World Cup game. Fans will instead have to choose between Brazil on free-to-air television and a Friday night out at another sparse Valley, notwithstanding promotional offers.

It’s likely therefore that this week represents the best opportunity to reset the season in the eyes of the Valley faithful. At least they will arrive in a more optimistic frame of mind – and hopefully in greater numbers than in recent weeks too.