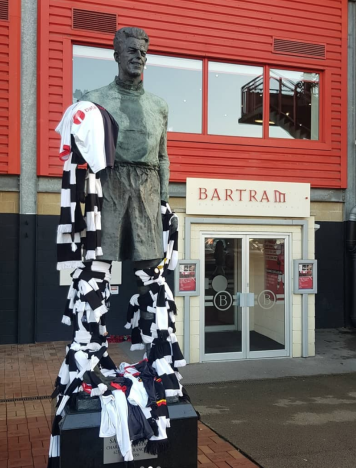 History has a strange way of surprising us when we least expect it. The departure of Roland Duchâtelet, which seems certain to happen now, took a lot of us by surprise.

So many times we thought we’d never see a day like Friday 29th November. There’s been enough talk of independence days or special dates in this country in recent times, but this was one we could all agree on. Somebody on Twitter even said we should rename one of the stands “29th November”.

Or maybe we just ought to call this Bartram’s Day because on Saturday there was one image above all that said: “We’ve got our Charlton back".

Seeing Sam Bartram’s statue decked in black and white scarves, we could see that the battle was done. I’d say it was Charlton’s pulling down of Saddam Hussein’s statue in Baghdad but that didn’t end so well.

There was something very emotional about yesterday, passing the great goalie’s figure on the way into the west stand. So many people had given up their protest scarves as if an act of charity for Cold Relief up in Newcastle.

A few years back, a Brighton fan told me not to worry unduly. They’d been through the mill too and every club’s dark times pass in the end. He said then that Duchâtelet was no more than a custodian like a publican. Just the same as publicans come and go in the pubs where we have our drinks on match days, owners do the same.

Hearing that was small comfort. Though on a whole different scale, Roland’s reign was like living through a night in the Blitz and being reminded of dawn coming. Caught up in the darkness, it was impossible to see light at the end of a dark tunnel engineered by our elusive owner. I thought we’d never get out of it.

Looking back, the breakthrough came on Friday night, May 17th. That evening, after we had beaten Doncaster, fans stormed on to the pitch. Having taken enough, we started taking our Charlton back.

Lee Bowyer, with the knowledge of the crowd on his side, spoke as a fan too in his dealings with Duchâtelet. Unlike many of the previous minions who’d shirked on the sidelines, he was one of us.

Bowyer’s story is the stuff of best-selling books. The professional journey that he has made from his early days at The Valley to where he is now is remarkable. The personal side is even more remarkable – from angry young man to personable leader of players, fans and the spirit of a club.

If Chris Powell was the first manager to give me a sense of the specialness of Charlton, then Bowyer against all the odds is the one who gave it back. I know that has been said before, even here, but I want to say it again as thanks for his role in this changing of the guard.

Yet for me, yesterday wasn’t Bowyer’s day or even Bartram’s day. It was the day when I saw smiles back on the faces of supporters. Even Airman Brown had a smile as long as Pinocchio’s nose when I passed him in flight to the ground. Our supporters’ trust chairman too appeared on Sky with a grin as wide as the sinkhole that appeared in part of Charlton a couple of years ago.

Thursday’s earthquake had closed the hole we’d been suffering for six years. Suddenly the traffic was flowing back to The Valley. Flowing on the internet too from every part of the world where Addicks congregate in worship or pray alone on Saturdays: China, Thailand, Prague, España and dozens more I saw on Twitter.

Passing Bartram, I saw a former protestor coming out of reception with his kids and thought of when we’d stood there years before chanting against Katrien’s firewall of “no communication with the rabble”.

I was there on the night a bottle was thrown and there on days when we threw pigs and taxis onto the pitch. Those days weren’t pretty and nothing to be proud of. You wouldn’t have brought your kids to them, but the protests played their part.

Sadly the collateral damage of Duchâtelet is that we are at risk of losing a generation of fans to half a dozen dark years. But in those years too we found solidarity and camaraderie.
Walking to the ground, I saw so many smiles back again.

The Covered End choir sang like a band that’d spent too long on tour, settling back into a show on home turf. The Valley was ours again – the new chairman echoing the words of my Brighton mate by saying that owners are no more than custodians. The ground’s back in our custody again.

Yesterday really felt like the first game in a long time where these players are mine, this club’s mine and this ground is mine. I have written before in VOTV about how this ground means so much more than just a football stadium even though I came to the party long after the battle to win it back.

This place is where I have watched dozens of games with my elderly father-in-law who won’t be here forever unfortunately. It’s where he dropped his fresh cup of tea on the freezing cold day we beat Sheffield United in the League One title winning season and was too proud with age to get another. It’s where he asked me the season before if Hartlepool dressing as smurfs was “a northern thing”. He was even more confused when they came back a year later as Oompa-Loompas.

It’s also where I’ve watched darts in the Covered End bar with my father a couple of years before he died, where I was sitting when I got a text that my sister-in-law was having another child who’d become my god-daughter and where I’ve taken so many friends down through the years. I’m even taking American visitors there on Boxing Day to the Vista Restaurant and boy am I glad now that the bucks ain’t going to Roland.

This is my club back again. It’s our club back again. I’m glad to have played some small part in sharing the story of what was happening to the wider world in the days of protest.
Though the past few years have been bad there have been good moments in the midst of it. Charlton supporters have once again shown their fighting spirit. We’ve won a battle that could end up being as significant as going back home to The Valley in the long run.

And those of us who weren’t there for that and lots of other things in recent history, at least we now get to tell a whole different set of tales. Like I was there when John Barnes played for Charlton, giving his two percent in the White Swan. Or the night of an open meeting to rally against the ownership, in Woolwich where fans had once marched in protest against the council and celebrated into the night after the 1998 play-off win over Sunderland.

That seems long ago now – as long as the trek Bartram faces when he carries those scarves back home for Christmas. For us, whatever the New Year brings, we can approach it with resolution.

It’s not about investment or getting promotion this season for me. I’m not even thinking of Bowyer’s Christmas shopping list and fantasy football teams at The Valley in the next few years. I’m just glad to have got my Charlton back. And to share that with everyone else who’s got their Charlton back too. Because everybody’s got an individual sense of what Charlton is to them. Duchâtelet never got that. But as some in the Covered End choir sang yesterday: “We’ve got Roland out.”

We didn’t even care about our loss to Wednesday. We’d already won on Friday. We’ve taken back control. We’ve got our Charlton back.