More than a new head coach is needed now 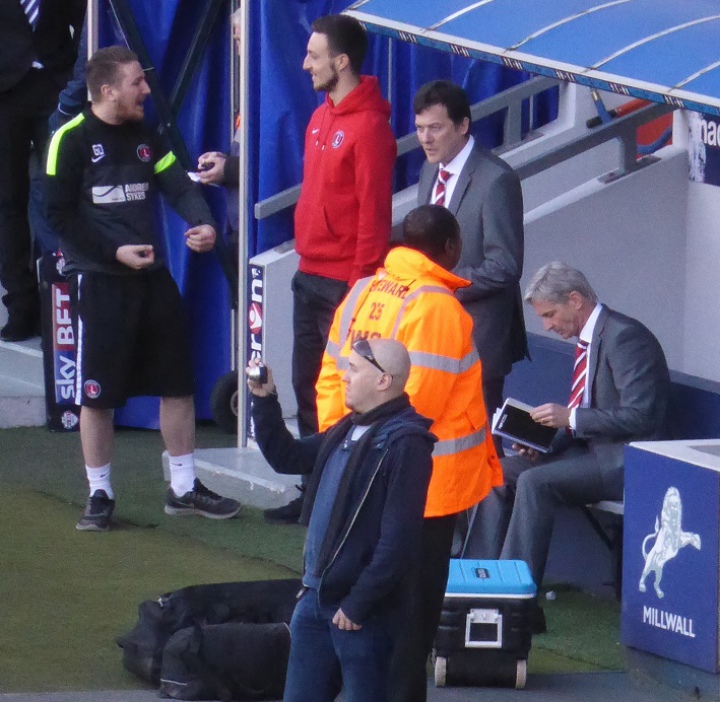 Coming or going? Karel Fraeye (standing, centre) with then head coach José Riga at Millwall in 2014

The fog that shrouded much of Britain last weekend may have given way to a more familiar November drizzle, but it remains just as thick around events in London SE7, where interim head coach Karel Fraeye is facing what may be his first and last Charlton home match in charge.

Or he could be appointed until the end of the season next week. Or allowed to drift on in token charge towards December. Nobody can say with any confidence because the Charlton board is observing a Trappist oath until its junior members meet selected fans next Tuesday. Thus far they have not even explained why Fraeye’s predecessor was dismissed.

A sequence of eight defeats and two draws in ten games - since embellished by two further away defeats - perhaps renders that redundant. I would say chief executive Katrien Meire was probably away having surgery to remove one or other foot from her mouth, had she not popped up in Dublin in midweek for a business conference that presumably provided another opportunity to improve her CV. God knows what that did for Charlton in the club’s present situation, but it would be nice to think it didn’t pick up the bill for her flights.

It was Meire who had earlier hoped that Guy Luzon - the fourth Charlton head coach in under a year - would be the club’s own Alex Ferguson and who offered strong backing for him in the South London Press just four days before she got her instructions from Belgium to sack him, just as she had urged supporters not to overreact to the previous downturn in results only 24 hours before dispatching his predecessor.

By contrast there was no management attribution on the subsequent club claim that Fraeye had previously “masterminded” Charlton’s escape from relegation in 2014, “alongside José Riga” - but evidently without the help of Chris Powell era colleagues Alex Dyer and Ben Roberts. They have joined the ranks of the disappeared in the Belgian version of the club’s history, insofar as history is allowed at all.

Now the Addicks prepare to welcome Sheffield Wednesday, who will be confident of filling their boots against a club and squad in disarray, depleted again by injury, stripped of confidence and led by a man without significant credentials to do the job - a male version of Meire, in fact.

Punch-drunk fans plan a protest behind the west stand at 2.30pm on Saturday, while a parallel Spell It Out campaign is urging fans to wear black and white, particularly for the televised Ipswich Town game at the end of the month. I support both initiatives.

Many others, including some season-ticket holders, are simply staying away, and who can blame them? Yet it is important, if Charlton are to have a future, that anger triumphs over apathy and brings its force to bear on owner Roland Duchâtelet. A club that took its modern shape out of the long campaign to return to Floyd Road must not be meekly surrendered to the whims and fantasies of a hermitic overseas owner who has visited SE7 fewer times than most of the Wednesday fans who will sit in the Jimmy Seed Stand this weekend. That would indeed be a betrayal.

The popular objection to protest, and part of the reason that some will walk away, is that there is no obvious alternative to Duchâtelet on the horizon and that he cannot be made to listen whatever supporters do. A fire sale would produce the risk of an even more unsuitable owner, we are told, although the longer Duchâtelet persists the less feasible this seems. Yet the flaw in his approach, even assuming there is a plan behind it, is as glaring as that in John Fryer’s transfer of the club to Selhurst Park 30 years earlier. It does not and never will stack up financially.

One thing we know is that he does not want to get relegated from the Championship, which is perfectly reasonable. His actions in the last two years show that. It would cost him a minimum of £5m in television and solidarity payments, plus ticketing and commercial revenue, which he could not hope to offset in reduced costs - and that shortfall recurs for every season spent in League One.

The problem is that even if he takes the steps to avert that disaster in the short term and is successful, which is more difficult with each fresh defeat, there can be now be no confidence that we won’t be here again in 12 months' time.

The question remains what fans want to achieve by protesting. “RD out” is a convenient shorthand and personally I am sceptical that he can be part of any solution. “But then what?” is the inevitable retort. The fans cannot easily supply that answer, but actually it’s not the ownership of the club that matters, it’s how it is run.

If Duchâtelet possesses even a trace of humility then it is just possible he could be persuaded to embrace a different model and that could be sufficient. He has the money to make it work and he would get the backing of the fans if he changed course. That’s why my favoured refrain remains “We want our Charlton back!”, for all the apparent ambiguity that entails.

For it to have any meaning there must be a broad consensus around what “our Charlton” looks like, but I think that’s easier than some like to argue. Indeed, most of the relevant characteristics are not unique to our club. We’d all agree, presumably, that “our Charlton” wear red and white. The fact that other teams do too does not negate the point.

“Our Charlton” play at The Valley - that’s a whole other debate, but there is no serious suggestion to the contrary from Duchâtelet, even amid concerns about an impending scheme to demolish the existing Superstore and replace it with flats.

Similarly, nobody is likely to be campaigning for the amateur days before the first world war or even the Gliksten era that ended in 1982 and the instability that followed it.

“Our Charlton” is also a club run by suitably experienced and reliably competent managers, on and off the pitch. Neither adjective applies to recent head coaches or the chief executive, I would suggest, and this is a major point of contention with the owner. Of course previous incumbents have not always met these criteria either, but when that has not been the case the club has usually floundered, as it is now.

It seems to me that a minimum change is the replacement of both Fraeye and Meire with genuine leaders whose experience can give the fans confidence that the owner will not be able to impose his own ideas without appropriate professional challenge. He will always get to make the big decisions, but only a very arrogant and foolish man would believe that he is able to make the day-to-day choices about the running of the club from Belgium.

Many will testify to the personal charm of Meire, but that does not make her an effective manager. The string of false steps and ill-advised public statements, together with her invisibility in times of crisis, suggest that she is the very opposite of the leader that the club and the business require. The stream of gimmicks that define her tenure has exposed the club to ridicule.

This brings us to what for some is the nub of “our Charlton’s” identity - the bond that was established between board, staff and fans over a 20-year period from 1990 and which underpinned the most successful period in the club’s modern history.

Meire’s repeated failure to reply to numerous polite and reasonable communications from a diverse range of supporters is not only lazy and fatuous in terms of her effective stewardship of the business, but deeply disrespectful to that tradition and also to the individuals involved. No wonder they disrespect her in turn.

“Our Charlton” in the 1990s and early 2000s included a board of directors who were almost all supporters and a large number of fans at all levels of the staff, including for full disclosure myself. Indeed, a feature of the structure was the extent to which people moved from contributing their time voluntarily to employment or to directorships.

The bond that created was probably unique and it is unfortunate that the extent to which it was successful has since been obscured by the latter part of the last regime when these relationships were wilfully destroyed. It’s sometimes claimed the model failed, but the reality is that the club was brought down by shortcomings on the pitch that could only be traced back to shareholding directors. Iain Dowie, Les Reed, Alan Pardew and Phil Parkinson, for better or worse, were not appointed as team managers in the ticket office, or by the club’s communications team.

Others have pointed to an alleged need to “professionalise” the administration, which is not only insulting to those who were involved but severely undermined by the unfolding evidence that what has replaced it is anything but that. We need look no further than the complete and pointless shambles Meire made of the programme sales and Crossbars last season, at the incoherent ticket pricing policy, at the Bournemouth catering voucher debacle in May and the season-ticket mail-out over the summer for evidence that she is not up to her job.

None of these things should involve the owner. Responsibility must surely sit with her. The allegation of dishonesty in her statements attaches to her like a bad smell, although she refutes it. It’s also hard to avoid the conclusion that when she wanders down Floyd Road as late as 1.30pm on a matchday it is testimony to the fact that she no more supervises her staff effectively than she is held to account herself.

Of course, it’s unrealistic to imagine that old set-up can be reinvented, even with Duchâtelet’s co-operation, but fans do no need to be able to trust the club and that requires a completely different approach to interacting with supporters, including an end to the progressive and cynical closure of the ticket office to force people to buy online. It’s tough to see how Meire can deliver the change required.

Regardless, most will see the more immediate priority as the appointment of an experienced and credible leader for the football side, because if the team is relegated the rest of the club is likely to collapse anyway. Appointing a manager with British experience and signing some players equipped for the physically demanding 46-game Championship season would go some way to pacifying increasingly alienated supporters, but it is only a temporary fix unless it is accompanied by a major switch in the way this regime operates.

The reason why that must happen, even from Duchâtelet's perspective, is that unless we get “our Charlton” back, he and Meire are increasingly likely to find themselves presiding over a corpse.

But it doesn’t have to be this way. So let them both understand now that we are not going to give up our cherished and historic club without the most almighty fight.